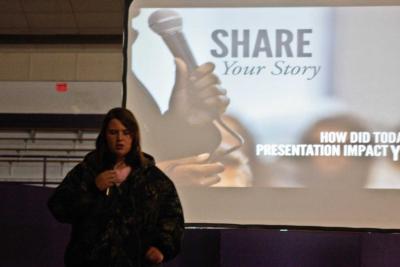 Students open up about the effects of bullying

One by one students of Hominy Middle School made their way to a microphone that stood midcourt in the old high school gymnasium.

The young students shared stories of having to deal with drugs, violence, alcoholism and death in their still evolving lives.

It was a meaningful moment for audience members especially Neil McIntyre, elementary specialist for Rachel’s Challenge, who was there spreading a message from the Rachel’s Challenge organization which strides to battle bullying in schools by spreading messages of kindness through presenters like McIntyre.

“That’s a rarity, when it came time to share and who was willing to stand up there and be judged and to speak from their hearts it was the middle school kids willing to do it, which is kind of rare because a lot of times they are intimidated by the older kids…” McIntyre said. “I thought that was encouraging to me that the middle school kids felt empowered to share like that.”

McIntyre was brought in by the Osage Nation Counseling Center. Brooke Ashlock, ON Counseling Center Substance Abuse Counselor, worked about two years to bring McIntyre in to spread the concept of kindness in hopes of preventing bullying in schools.

In a two-day event McIntyre presented to both the middle and high school students at Hominy High School’s old gymnasium on Dec. 6, an evening presentation for parents and other community members followed. On Dec. 7 he held a presentation for Hominy elementary students.

Ashlock said having worked in several of the schools in Osage County she felt it was necessary to bring in someone to talk about bullying in schools.

“The biggest thing is for kids in high school, middle school, down to elementary kids, as young as nine and 10 years old, they’re feeling the effects of bullying and they’re feeling the effects of bullying because they’re telling people and no one’s able to do anything, no ones able to help protect – people believe bullying is just a kid thing, it’s a kids past time, it’s just something that they do and it will go away,” she said. “I have been interested in Rachel Scott since 1999, I’ve watched her story, I’ve researched it, I wanted this for two years, ever since I came to the counseling center.”

Rachel Scott was a junior at Columbine High School and was the first victim shot and killed during the Columbine shootings where 13 people total were killed on April 20, 1999.

Shortly after Scott’s death her father Darrell Scott started Rachel’s Challenge, an organization that shares Rachel’s story and spreads messages of her kindness in hopes of preventing bullying in schools.

McIntyre first showed a power point slideshow that introduced Rachel Scott and later shared her desire to change the world through acts of kindness. Then, he left the microphone open to the students to share their thoughts about Rachel Scott, bullying or anything they felt like sharing.

McIntyre said the organization isn’t an anti-bullying organization but an organization that weighs heavily on the idea that with kindness people can overcome bullying.

“We’re number one in the world at what we do, spreading kindness and compassion and going around to different schools, for a non profit we’re doing big things,” he said. “Our overall goal is to spread kindness and compassion, to wake kids up and make them realize that that’s what’s really important in life, and that we’re having a positive impact on the people around us, we’re not an anti-bullying group but in a lot of ways we do deal with those same kind of issues…”

At the end of each presentation McIntyre welcomed the students to start up an organization at their school where students who join the group help spread kindness in their schools.

Ashlock said her daughter was once a victim of bullying and she eventually had to have her homeschooled. She said she has since made it a professional and personal goal for herself to help students who are being bullied or are bullies.

“The fact of the matter is now it (bullying) follows them everywhere they go and it causes so many painful things; substance abuse, suicide, weight issues, truancy issues, dropping grades, quitting school, all those things, it affects everything,” Ashlock said. “I want to give the kids a positive way of thinking, a positive way of treating one another and seeing that there is a different way of doing things and how to learn to do that.”

The students were unable to comment but both McIntyre and Ashlock thought the events were all successful.

“Those kids loved it,” Ashlock said. “We heard from a lot of parents that said the kids were very happy, the teachers and principals said they were very happy.”