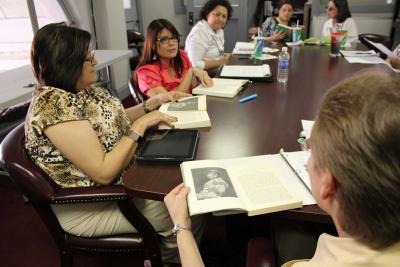 The Osage Book Club is giving Osages and Osage Nation employees the chance to learn about Osage history by simply opening a book.

“We are providing an avenue for not only our staff but the community to read some of the original works from the late 1800s-early 1900s which are some of the early ethnographic work done on the Osages,” said Andrea Hunter, director of historic preservation for the Osage Nation.

The Osage Book Club began in 2009 and the meetings are held once a month at the First National Bank.

Hunter said the attendance has varied over the years but the club hasn’t had any large groups attend the meetings.

“About 10-12 people show up on average which is a good number that I hope we can sustain and generate more interest,” Hunter said.

Hunter believes by having the book club it provides a means for people to get together and meet one another. As well as an opportunity for people to sit down and talk about Osage culture.

“Everyone brings a different background, education and perspective on the Osage culture, which is really neat,” Hunter said.

LaFlesche, who was an Omaha anthropologist, wrote the book in the early 1900s. He interviewed elders that knew about the Osage traditions and rituals and spent time among the Osage.

The interviews tell about every step of the ceremony, every ritual and what the tribe had to do, Hunter said.

“Today we just send people off to war but for the Osages back then it was a huge affair to go to war and they had to make sure it was something they really wanted to do and everyone was on board,” Hunter said.

The book club began reading early texts on the Osages, that way people will have a familiarity when they start reading more recent books, Hunter said. And they will have the knowledge to be able to critique the most recent works as well.

For Welana Fields, Osage, the book club has allowed her to sit down and read LaFlesche’s book in its entirety.

“I’ve done research and used parts of this book but never sat down and read it which is something I’ve been wanting to do for a long time,” said Fields, who is the historic preservation tribal research assistant for the Nation.

She said the book is fascinating and from LaFlesche’s descriptions she is able to paint a mental picture of what the war ceremony was like.

“These are the only ethnologies that we have of our past and they are important,” she said.

Different departments like the Historic Preservation and the Osage Language Department rely heavily on LaFlesche’s writing to help them understand the Osage history, Fields said.

But anyone could change that.

“We can pick up right now and start writing things down about our dinners and different clans,” Fields said.

Hunter hopes that over the years the book club will inspire Osages to do just that; write about their history and culture.

“I think it is incredibly important for the tribe to know who we are,” Hunter said. “I think it is an important part of tribal sovereignty and if you identify as Osage do you know what it means to be Osage? And to know that, you need to know the history of who we were.”

You can download “War Ceremony and Peace Ceremony of the Osage Indians” by Francis LaFlesche for free athttp://www.archive.org/details/bulletin1011939smit, select the PDF option and save it to your desktop. Otherwise you can buy it through online retail outlets.

The next Osage Book Club meeting will be on Friday, April 27 at 12 p.m. at the First National Bank in Suite Mezzanine.