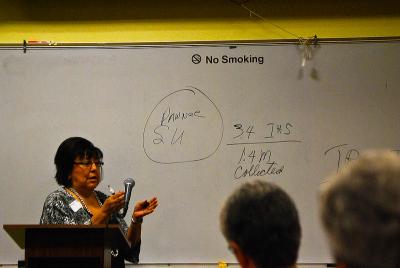 OKLAHOMA CITY – Nine Osages seeking a Congressional seat in June’s General Election sounded off during an April 21 political gathering sharing their concerns about the current tribal government and what they would focus on, if elected for a four-year term.

Jim Ryan, who is seeking a seat in this year’s election, coordinated the event, billed as the “Revard Rally” and invited fellow candidates and the Osage public to the event held in The Village Library. Ryan, a member of the Revard family, organized a similar rally in Edmond for the candidates in the 2010 general election.

Shannon Edwards was the lone Congressional incumbent attending the event. She said there are several unfinished items needing Congressional attention, which she wants to focus on. Edwards said, as an example, the Nation needs to focus on improving the government campus infrastructure, which has been a longstanding topic.

Edwards said upgrading the campus could cost between $10 million and $20 million. “One of the things we’re going to have to do is prioritize budgeting,” she said adding the Nation also needs to focus on investing the $50-plus million it has in reserve money. “It could be earning as much as three to four percent, with stronger help it could earn eight to 10 percent.”

Edwards requested to speak first so she could leave early due to family medical reasons. Her father, Oklahoma City attorney John T. Edwards, died the next day.

Matthew Shunkamolah, who spoke next, said he is running to address problems he encountered or is aware of after working for the Nation most recently as the Gaming Commission Executive Director. He resigned from the post in March stating, “I felt that the executive (branch) side … they’re not doing their job,” and listed concerns he would like to address.

Hank Hainzinger is a first-time office seeker for the Osage tribal government and believes his fresh perspective will be beneficial if elected to Congress. Hainzinger said he is not running for office in wake of any recent event affecting the government, but believes Congress will face tough decisions such as budgeting. “There’s cuts to be made, people won’t like them all,” Hainzinger said.

Hainzinger, a lifelong Osage County resident with a ranching background, took an audience question of whether the cattle industry is profitable in Osage County and a possible additional revenue source for the Nation. Hainzinger said the demand for beef is presently high, but notes that could change with the economy. He said there are plenty of acres for cattle in the county, but also said it may not spur a lot of local jobs.

Rose Mary Shaw said she wants the Nation to improve its health services for the people. Shaw believes the Nation needs to get stronger mental health services with a full-time psychiatrist otherwise patients face a months-long wait to be seen by a part-time provider. Shaw also believes the Nation still needs to compact the Pawhuska Indian Health Service Clinic despite the recent departure of the four-member Health Authority Board, which resigned in wake of recent decisions made by the Executive Branch.

Shaw’s brother, Ron Shaw, M.D., served on the Health Authority Board which is needed as part of several requirements for a tribe to contract an IHS facility to have a stronger say in spending millions of federal money allocated annually for health care. “We have no say-so in our funding,” she said of the IHS clinic budget currently determined by IHS officials in Pawnee or at the Oklahoma City Area Office.

Olivia “Libbi” Gray said her professional experience comes from working as a consultant with several tribes. “I’ve seen what works and what doesn’t work in Indian Country,” she said adding she’s familiar with the Nation’s programs and said the tribe’s business shouldn’t come to a standstill if elected leaders don’t get along. Gray is married to former Osage Principal Chief Jim Gray.

“What I’m going to ask you guys to do is look at the skills, expertise (of the candidates) and also look at their attitudes,” Gray told the audience. “There will be problems, likely investigations, there’ll be times you’ll have to tell someone ‘no’ (at budget time), laws have been broken. Those things have to be handled – we don’t need to scream from the rooftops.”

Jim Ryan said he would like to see the Nation improve its senior citizen services and opportunities such as providing facilities and housing in Fairfax and Hominy to mirror Pawhuska’s. “We need to get senior activities across the board,” he said adding computer literary classes as an example.

Ryan said he wants to see more health initiatives offered such as nutrition and exercise opportunities to reduce the diabetes risk among Osages. Ryan believes the Nation should also explore developing a sports authority board and a gym membership card program, which mirrors the current health benefit card, to help all Osages cover health club-related costs.

Amanda Proctor said one focus for the Nation is the Osage Limited Liability Company (LLC). Proctor has concerns with the LLC after hearing recent reports and political chatter regarding the entity’s finances and activities. “I think it’s definitely something that warrants attention,” she said adding that she’s seen both good and bad instances of contracting occur in the Indian law field where she works as an attorney.

If elected, Proctor said she would look at her Tulsa area law practice to see if any potential conflicts of interest are present in response to an audience question. Proctor said she’s worked with 11 area tribes in efforts, which include: putting land into federal trust status; working with the Ponca Tribe on a land boundary dispute; and working with the Muscogee Creek Nation on its recent purchase of the Riverwalk Crossing development in Jenks.

Carl Sellers told the crowd: “I will serve all Osage people, I want to emphasize all Osage people.” He said he supports outreach efforts on the part of Congress to hold town hall-style meetings, “where we come to you.”

With regards to education, Sellers said he supports efforts to award all Osage college students the same scholarship amount regardless of the institution. This is in reference to prior Congressional discussion of whether students attending low-cost or tuition-free institutions should receive lower scholarship awards versus the maximum amount. “We promised them $3,500, you should receive $3,500,” Sellers said.

Nicki Revard Lorenzo said her prior educational experiences has prepared her to take on government duties and she added the budgeting process should be improved. “I’d like to see a template placed on all appropriation bills which asks the question: ‘Will this bill benefit all Osage people?’”

Lorenzo said she tackled policies and procedures, budgeting and dealt with federal and state dollars while superintendent and principal at an all-Native school with Pomo students in northern California. She said her educational experience also involved reaching out to the public and addressing tough issues, which were needed to “heal the community.”