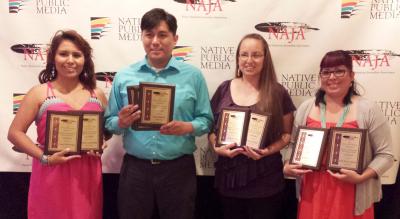 The News swept two categories winning first through third places for Best Feature Photo and Best News Story for monthly/bi-monthly newspapers in its respective division size. This is the fifth year the newspaper has participated in the annual contest hosted by Norman, Okla.-based NAJA.

The newspaper’s 2013 award wins include:

Toehay also won third place in the Best Sports Photo category for a photo she took during the 2011 Woodland Class A State Championship game.

In the Best Feature Story category, Clachischiligi won first place for writing “Osage artist gives elixir of youth to U.S. Veterans” featuring C.R. Redcorn who draws sketches of military veterans for free. Ramon-Sauberan won second place in this category for her story “Osage transgender running for Osage Congress shares her story” featuring Jozi Tall Chief, who ran for the Third ON Congress in the 2012 election.

Shaw-Duty won first place for Best News Photo for a photo shot of the former Grayhorse Village dance arbor before it was razed to make way for the new arbor. Shaw-Duty also won first in the Best Column category.

The News staff received their awards during the 2013 NAJA event co-hosted by Native Public Media and referred to as the 2013 National Native Media Conference. The conference was held July 18-21 in Tempe, Ariz. The Osage News staff and Editorial Board members are NAJA members.

Osage News editor elected to NAJA board of directors

In other NAJA-related news, Shaw-Duty is one of five Native journalists elected to the NAJA board of directors during this year’s conference to a three-year term. This will be Shaw-Duty’s first term ever as a NAJA board member.

According to a NAJA news release, the board members elected will serve more than 330 NAJA member journalists across the United States and Canada. The board will continue to execute NAJA's strategic two-year plan, which includes expanding member benefits.