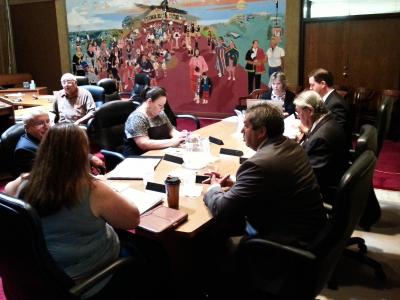 The Osage Nation Congressional Select Committee of Inquiry is meeting to investigate the 15 allegations of wrongdoing against Principal Chief John Red Eagle to determine whether a removal trial is warranted. The Congress called itself into its seventh special session on Aug. 21 for the committee work to begin.

Per Congressional rules, a motion to form a Select Committee of Inquiry is needed to investigate any written allegations raised against an elected or appointed ON government official that may constitute grounds for removal. The Congress unanimously voted for the motion to form the committee during its sixth special session last month after the 15 allegations were raised in the written motion by Congressman William "Kugee" Supernaw.

Those allegations state that Chief Red Eagle allegedly “abused the power of his elected position” several times and allegedly did not uphold Osage and federal law in several separate events starting in 2010, with those alleged events occurring as recent as July.

The seventh special session was called for because the Select Committee of Inquiry may only meet during a regular or special Congressional session, according to Congressional rules.

The committee opened its meeting with prayer then its members unanimously elected Buffalohead to serve as committee chairperson and Mason as vice chair. Shortly after, the members voted to enter executive session citing personnel matters as the reason for the closed-door meetings where witness testimonies and evidence will be presented for the committee's review during the investigation.

There were no opening addresses offered by Red Corn or Chief Red Eagle who normally give opening remarks on behalf of their respective government branches at the start of each regular or special session. Instead Second Congressional Speaker John Free presided over the 10-minute session, which included introduction of two ON Gaming Commission budgetary bills to be considered later in the special session. One hour later, the Select Committee of Inquiry was called to order.

The Congressional Office posted meeting agendas for the Select Committee of Inquiry for the dates of Aug. 19-23 and Monday Aug. 26. On Aug. 23 during Day Five of the special session, Buffalohead announced new daily committee meetings dates for Aug. 27-30.  Special sessions may last up to 10 days and may be extended up to three additional days with two-thirds written approval of the Congress.

In addition to committee members and any witnesses called to testify and/or present evidence, the executive session attendees will include fellow Congress members not serving on the committee, Congressional legal counsel Loyed “Trey” Gill and an outside court reporter hired to record minutes of the proceedings.

The Select Committee of Inquiry may adopt any additional rules of procedure as long as those rules do not conflict with other Congressional rules or applicable laws.

Once the committee work is finished, it will provide a written report to the Congress providing details on the evidence in support of the allegations that qualifies as grounds for a removal trial. If the Congress votes to hold a removal trial, an ON Supreme Court Justice will preside over the trial – held in public – with the 12 Congress members serving as the jury.

Drent, who was the Supreme Court Justice that picked the committee members, will be ineligible to preside at a removal trial should one be held, according to Congressional rules.

Editor's note: This article was updated Aug. 23 to include the new committee meeting dates announced earlier that day.