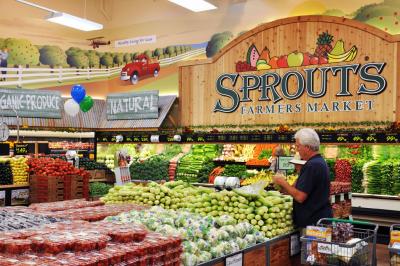 Osage LLC started its passive investment relationship with Sprouts in January 2010, which had 43 stores in four states at the time. Now the Sprouts chain has more than 150 stores in eight states, according to its website.

“We are exceptionally pleased with the overall return on the Sprouts investment, especially since passive investments were part of our initial strategy,” Osage LLC CEO Carol Leese said in the release. “This was an equity investment, which we felt had higher opportunity for gains over time.”

According to the LLC website, its passive investments are made with companies with the LLC taking a minority position by providing capital to fund business development. In the LLC’s 2011 annual report, the Sprouts investment is listed as an equity investment with a carrying value of $300,000.

On Aug. 1, Sprouts President and CEO Doug Sanders rang the opening bell when the shares went up for grabs in New York’s Times Square, according to a Globe Newswire announcement.

That day, Sprouts issued 18.5 million shares at $18 a share, which is $2 to $4 more per share than the initial range of $14 to $16 a share announced the previous week, according to Phoenix Business Journal reports. Sprouts reported $2 billion in sales last year.

Osage LLC’s net proceeds, after the deduction of the underwriter’s fee, were $702,121.77, bringing the total profit realized on the investment to $684,054, according to the LLC.

The Wall Street Journal reported Sprouts's stock rose 123 percent to close at $40.11 on the Nasdaq on Aug. 1, from its original $18 price. The Sprouts IPO fetched a higher price than expected, raising $333 million before the potential sale of additional shares to underwriters.

The Journal also reported: “Sprouts's strategy hinges on luring shoppers from conventional supermarkets with competitively priced produce, then enticing them to buy packaged food and other products like health supplements that are more profitable. Sprouts plans to increase its store count by at least 12 percent annually over the next five years, which Sanders said he intends to do without acquisitions. Ultimately the company says it thinks the U.S. could support 1,200 Sprouts locations.”

It’s unknown what the share sales mean for the LLC and its passive investment with Sprouts. Leese did not return a call seeking further comment before the September edition of the Osage News went to press.

The LLC’s current strategy focuses on developing its operating companies’ competitive advantages and minority certifications including the 8(a) program. “Profits from the Sprouts investment will be used to capitalize growth for our construction and technology subsidiaries,” Leese said in the news release.