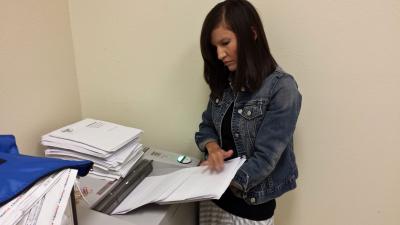 With the authorization of the ON Election Board, the ballots were retrieved from a Pawhuska bank vault where they’ve been kept since the June 2012 general election and the special election held two months later. Afterward, those ballots were taken back to the Election Office where Election Supervisor Alexis Rencountre shredded those ballots.

Rencountre and Election Board Chairman Walter Hopper collected the August 2012 special election ballots from Pawhuska’s American Heritage Bank (formerly Osage Federal Bank) on Aug. 21 for the shredding. The three-person election board voted to authorize the ballot shreddings, including the June 2012 ballots, which were destroyed in July.

According to the Nation’s election code, the Election Board must keep control over voting materials, including ballots for one year before they can be destroyed. Revised earlier this year, the election code (ONCA 13-16) reads: “All material used for procuring and casting a ballot shall remain under the Board’s control for a period of one (1) year after the day of the election.”

This will be the final election where the ballots will be kept in an outside bank vault. Rencountre and the board plan to use the Election Office’s newly created in-house vault to store any items needing high security surveillance starting with the 2014 elections.

In the 2012 general election, 2,124 Osages voted, which is just 500 voters shy of the 2010 general election turnout. The June election was held to elect members for the Third ON Congress with the top six candidates elected for four-year terms.

In the Aug. 13, 2012 special election, 1,024 absentee ballots were received and counted and 455 Osages voted in-person. The total number of ballots cast in that election is 1,479. Osages voted on four proposed constitutional amendments that month with all four failing to garner 65 percent of the “yes” vote to take effect.

The ON Election Board meets for regular meetings on the third Wednesday of each month. For more information on voter registration and to request absentee ballots, visit the Election Office website is at www.osagetribe.com/electionboard.