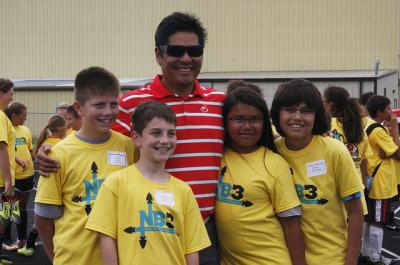 Applications will be accepted until Oct. 28 with preference given to grantees from the Southwest (New Mexico, Arizona), the Upper Midwest (Minnesota, Wisconsin) and the Southern Plains (Oklahoma, Texas).

Up to 12 grants of up to $40,000 each will be awarded for this year, according to a prepared release.

“This is a transformative time for the Notah Begay III Foundation,” said four-time PGA TOUR winner, NBC/Golf Channel analyst and NB3F founder, Notah Begay III. “Childhood obesity and type 2 diabetes are epidemics in Native American communities. Until we invest the appropriate resources to turn the tide against these preventable diseases, they will continue to overwhelm our communities.”

The Promising Program Grants initiative is made possible through a $1.5 million grant to NB3F by the Robert Wood Johnson Foundation, one of the nation’s largest health foundations.

According to a prepared release, there is no clearinghouse of data on the topic of childhood obesity, which continues to climb in Native communities but is showing signs of improvement among non-Natives. Some Native communities have childhood obesity rates exceeding 60 percent, indicating one-in-two Native American children will develop type 2 diabetes, a rate higher than all other ethnicities combined. Native Americans are twice as likely as Caucasians to die from diabetes.

These disparities between national averages and those among Native Americans points directly to the relative lack of resources committed to these issues in Native American communities. Statistics indicate that investments in awareness and prevention, especially among children, deliver strong return on investment and save significant public healthcare costs long-term.

For more information about NB3F, its work in Native communities and the continued need for support, visit: www.nb3foundation.org