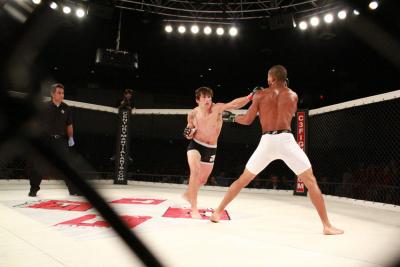 His opponent, Rashid Abdullah from Austin, lasted 2 minutes and 38 seconds before Rencountre knocked him out. It was a flash of punches when Abdullah’s knees buckled and Rencountre attacked.

The referee called the fight, TKO-Referee Stoppage from Strikes. Rencountre smiled, ran and jumped on top of the cage and flexed his muscles as his fans screamed and cheered.

“Oh man, this is awesome. The first time I get to fight in front of my mother, my family, and my close cousins, it feels good to fight in front of my hometown crowd,” Rencountre said after the fight. A long line of fans waited to speak to him, all wearing red shirts with his likeness on the front, his Osage name spelled out in Osage orthography at the bottom – Black Eagle.

“The first time ever, it was great, kind of nervous at first, but it kind of went over after the first punches started flying,” he said smiling, clearly enjoying the moment. “I want to thank everyone for coming out, man, it’s awesome. I couldn’t do this without you guys’ support and without their backing I wouldn’t be here right now, I wouldn’t be able to train and do what I do. I couldn’t do it without them, honestly.”

Roughly 300-500 people attended the fight that night, most of them wearing red shirts designed by Osage artist Ryan Red Corn, owner of Buffalo Nickel Creative, one of Rencountre’s sponsors.

Rencountre’s statistics on mixedmartialarts.com show he finishes his opponents quickly. When asked what that was like, he laughed.

“That’s a tough one, I don’t know. I’ve went through some battles in my time. My first pro debut went all 15 minutes, but it feels good to finish them early,” he said. “But I take them as I can get them.”

Mixed Martial Arts is a full contact, combat sport that allows the use of both striking and grappling techniques, both standing and on the ground from a variety of combat sports.

Rencountre, who trains at Alliance MMA in Chula Vista, Calif., has a head trainer, a striking coach, a Brazilian Jiu-Jitsu coach and a strength and conditioning coach. On top of the new disciplines he is learning, he was a college wrestling All-American.

If Rencountre continues on a winning streak he could qualify for the Ultimate Fighting Championships, a televised league of professional MMA fighters who fight in cities across the world.

The UFC is the fastest growing sports organization in the world, according to ufc.com. The organization started in 1993 and requires athletes to know various disciplines, including karate, jiu-jitsu, boxing, kickboxing, grappling, wrestling, sumo and other combat sports. It is owned and operated by Zuffa, LLC, headquartered in Las Vegas with offices in London, Toronto and Beijing.

According to ufc.com, the UFC produces more than 30 live events annually and is the largest Pay-Per-View event provider in the world. It is broadcast in 149 countries and territories, to nearly one billion homes worldwide, in 30 different languages. In 2011 the UFC signed a seven-year broadcast agreement with FOX Sports Media Group, including the longest-running sports reality show on television, The Ultimate Fighter, which airs on FX.