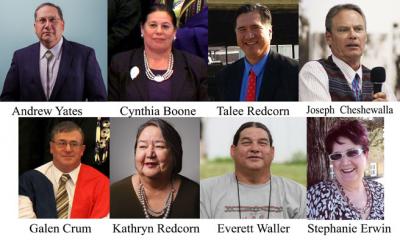 The unofficial results are in and the Third Osage Minerals Council has been decided, barring any protests.

Andrew Yates, Cynthia Boone, Talee Redcorn, Joseph Cheshewalla, Galen Crum, Kathryn RedCorn, Everett Waller and Stephanie Erwin are the new council members. The eight individuals will be responsible for the stewardship of the Osage Minerals Estate and the regulation of oil and gas operations from the estate.

Boone, who is the only Osage, and woman, to have been elected to serve three consecutive terms on the OMC, said she will keep doing what she’s been doing from day one: protecting the shareholder’s interests. When asked what she would like to tell her supporters she said: “A great big ‘June in Boone’ thanks to you. If it weren’t for my supporters I wouldn’t be here. I’m just so proud of the fact I can serve them one more term.”

When asked what assets she brings to the minerals council she said: “The fact that I’m a voice for my constituents. I’m not one to sit on my hands, I get right in there and I fight for their rights and I will continue to do so as long as they elect me to be their representative - and I’m just so happy to be in that chair right now.”

“I’m just glad. I feel like we have a challenge ahead of us and I’m ready for the job, ready to move forward with real interesting stuff and hopefully we’ll move forward in the future with what we have as Osages, which is the mineral estate,” Talee Redcorn said. “It’s the biggest asset in Indian County.”

When asked who he would like to thank for his win, he said: “I would like to thank the Osage headright holders and in particular Sophia Lookout, she’s going through some health problems and I asked her to be the first one to sign my petition and she did. I just want to thank her for that.”

Also elected was Everett Waller, who served on the 30th Osage Tribal Council and ran for assistant principal chief in 2010, but was unsuccessful. But having been elected to the third OMC, when asked what will he bring to the council he said one word: Integrity.

“The main thing we need as Osages: togetherness. Whether it’s like a child, we’re going to have to be taught a lesson to each other on how to get along. Our votes aren’t just votes, they’re to take care of our children. Every time I vote I’m going to look at my grandchild’s picture and make sure it’s the right [vote],” he said.

When asked if there was anyone he would like to thank, he said: “The Lord Jesus Christ, Wah-Kon-Tah; my mother, she never met this man, and my father, I want to give them all the glory … and I would like to thank my wife,” Waller said.

The newcomers to the council will be Stephanie Erwin and Joe Cheshewalla. Erwin has been a regular fixture at minerals council meetings for the past several years and Cheshewalla is a retired oil worker for the Bureau of Indian Affairs.

“I’ve got a whole laundry list of stuff that needs to be done, things that need to be taken care of that’s been overlooked [by the OMC] and they just kind of blown it off like it didn’t make any difference,” Erwin said. “But my main focus is to protect the trust, make sure the shareholders interest is taken care of, because often times after people get elected they seem to lose sight of who got them elected and it’s not about the Nation, it’s about the shareholders and their trust.”