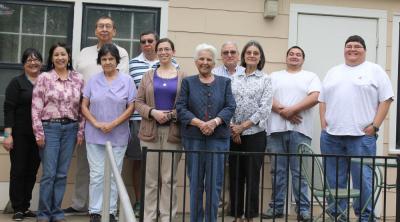 Osage Elders get together for final spring class

“I want to thank all the Osage Language [students] for taking the time to come to class and hopefully the students will see that the Osage language is in the forefront of every custom and rite that we do,” said Scott Lohah, former Osage language instructor. “Someday down the road when I go on to the other side of grandpa, I want to converse in the Wah-Zha-Zhi I-eh. My great aunt said it best, ‘I want this Osage language to go on forever.’ ” (Lohah originally sent his quote in an email, using the Osage orthography. However, the orthography is currently unable to be viewed due to font embedding restrictions.)

At the April 24 elders class participants sat and visited during the lunch that was provided by the language department staff. Lohah, the elder language instructor, went through flash cards on Osage words for money, and the class read handouts provided to them. The class took a group photo and was presented with a class completion award.

“I really enjoy attending the Elder class! I have been taught the symbols, phrases, some hand signs, written language, cultural guidelines and I think most importantly conversational Osage,” said Fidelis Davis. “It is important for the elders to be acquainted with the language because the young children are being taught early in their education, but there is a shortfall in the age progression that mid-range tribal members are so involved in making a living. Time just does not allow parents to attend language class for most that either have active children or care for elderly family members.

“I appreciate the work of Mogri Lookout, Vann Bighorse, Scott Lohah, and language program staff, and encourage further expansion of this important aspect of our culture,” he said.