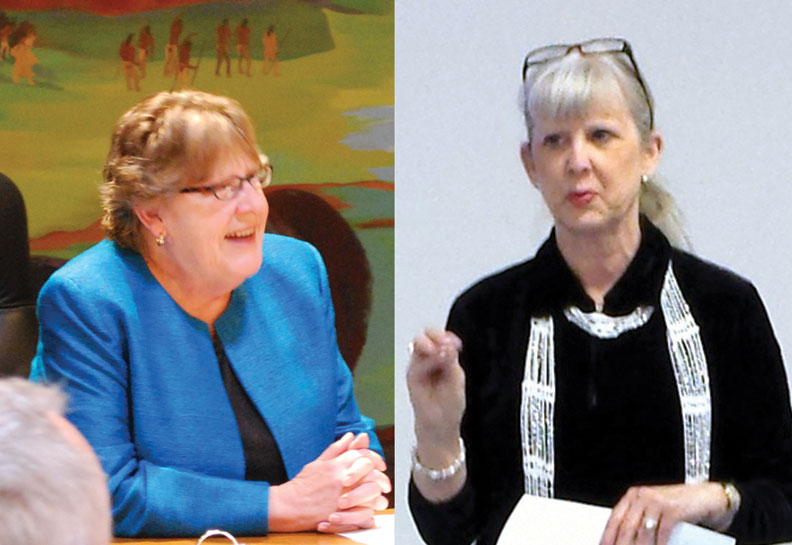 Both positions are under the Executive Branch and the Treasurer’s position is also subject to confirmation consideration by the ON Congress once the Principal Chief appoints an individual to the office.

Principal Chief Geoffrey Standing Bear announced the resignations during an Aug. 16 joint meeting of the Executive Branch and ON Congressional Affairs Committee. Standing Bear said both Catcher and Walters would stay in transitional roles as the new position holders get familiar with the work duties once they are hired.

Standing Bear said Walters resigned by agreement on Aug. 14. “We’ve asked Delary to stay with us to help on transition,” he said, adding Walters will continue working on a two-month contract once her resignation takes effect in mid-September.

Walters said her resignation is for personal reasons and declined further comment.

Walters was originally hired as the compensation analyst in summer 2011 and helped compile market raises and education credit bonuses for the ON employee positions to make them competitive.

Walters was also a witness in Red Eagle’s removal trial in January of this year. She was questioned on her ethical decision-making and testified she leaked information to Red Eagle’s office when certain employees were being investigated by the Osage Nation Attorney General’s office, including his granddaughter.

The HR director position is advertised on the ON government website with a starting salary of $44.72 per hour or $93,017 annually, full-time. Requirements include having a bachelor’s degree (master’s degree preferred) in human resources or related business degree with a minimum of three years HR experience and two years of experience in a supervisory position with at least five staff.

The closing date for HR director applicants is Sept. 3.

Catcher (Cherokee Nation) said she informed Standing Bear she was not interested in seeking re-appointment once his administration took office in July.

“The new administration asked me to stay on board while the search for a new Treasurer is in process,” Catcher said in an email. “I have agreed to stay on board and assist through a transitional period. For personal reasons, I have cut back my work hours to 4 days/ week.”

Per the Osage Constitution, a Treasurer may serve the Nation with the advice and consent of the ON Congress once the Principal Chief appoints an individual to the office. The Fourth ON Congress meets for its 24-day Tzi-Zho Session starting Sept. 2 and during that time will consider confirmations of appointees for the Treasurer position as well as several boards and commissions.

Appointed by Chief Red Eagle in March 2012, Catcher joined the Nation as the third appointed Treasurer in the 2006 reformed tribal government’s history. She previously served as CN Treasurer after being appointed by former Principal Chief Chad Smith and was confirmed by the Cherokee Tribal Council in January 2004.

“It has been a pleasure to serve the Osage Nation in the role of Treasurer and I look forward to working with a new Treasurer to ensure a smooth transition for the accounting department and the Nation,” Catcher said in the email.

The Treasurer’s position is advertised on the Nation’s website, but the closing date is listed as Aug. 21. The starting salary is $55.29 per hour or $115,000 annually full-time.

For more information on these and other available job postings, contact Osage Nation Human Resources at (918) 287-5445 or visit the website: www.osagenation-nsn.gov/opportunities/job-listings.