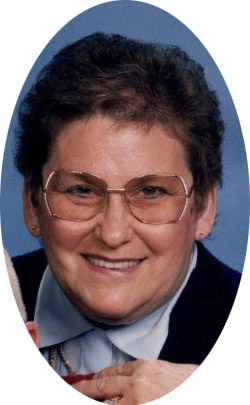 She married Delbert Sumter on May 26, 1955 and recently she and Delbert, along with family and friends, celebrated their 60th Wedding Anniversary.

Maretta was a loving Wife, Mother, and Grandmother and will be missed. She took great pride in her home, land, and all of the livestock. After catastrophic illness she had been semi invalid for the past 15 years, but she was a fighter and never gave up. She always had a smile for everyone and an “I’m Fine.”  She was very proud of her Native American Heritage. She was a direct descendent of Chief White Hair of the Boulanger Clan of the Osage Nation. She graduated from Sedan, Kans., in 1955. Because of her loving and caring she will leave a large void for her family and especially her husband Delbert.

Maretta was preceded in death by her parents Leon and Lettie Potter of Chautauqua, Kans., two brothers, Franklin and Bill Potter, and one sister, Sylvia Potter.

Maretta is survived by her husband, Delbert Sumter of the home, Glencoe, Okla., sons, Brad and his wife, Terri Sumter of Claremore, Okla., Scott Sumter of Ponca City, Okla., Tom Sumter of Ponca City, and daughter Kim Fraizer and her husband, Mark of Tonkawa, Okla. She is also survived by nine grandchildren and six great-grandchildren: one sister, Mildred Freeman of Augusta, Kans., two brothers, John Potter and his wife, Norma of Owasso, Okla., Larry and his wife Mary Lou Potter of Cushing, Okla.  Plus nieces, nephews, other family members and many friends. She left Friends in Ponca City, Enid, Texas, and for the last 20 years in the Glencoe and Pawnee area.

A special thanks to Dr. Doug Brant, the nurses and staff at the Drumright Hospital.