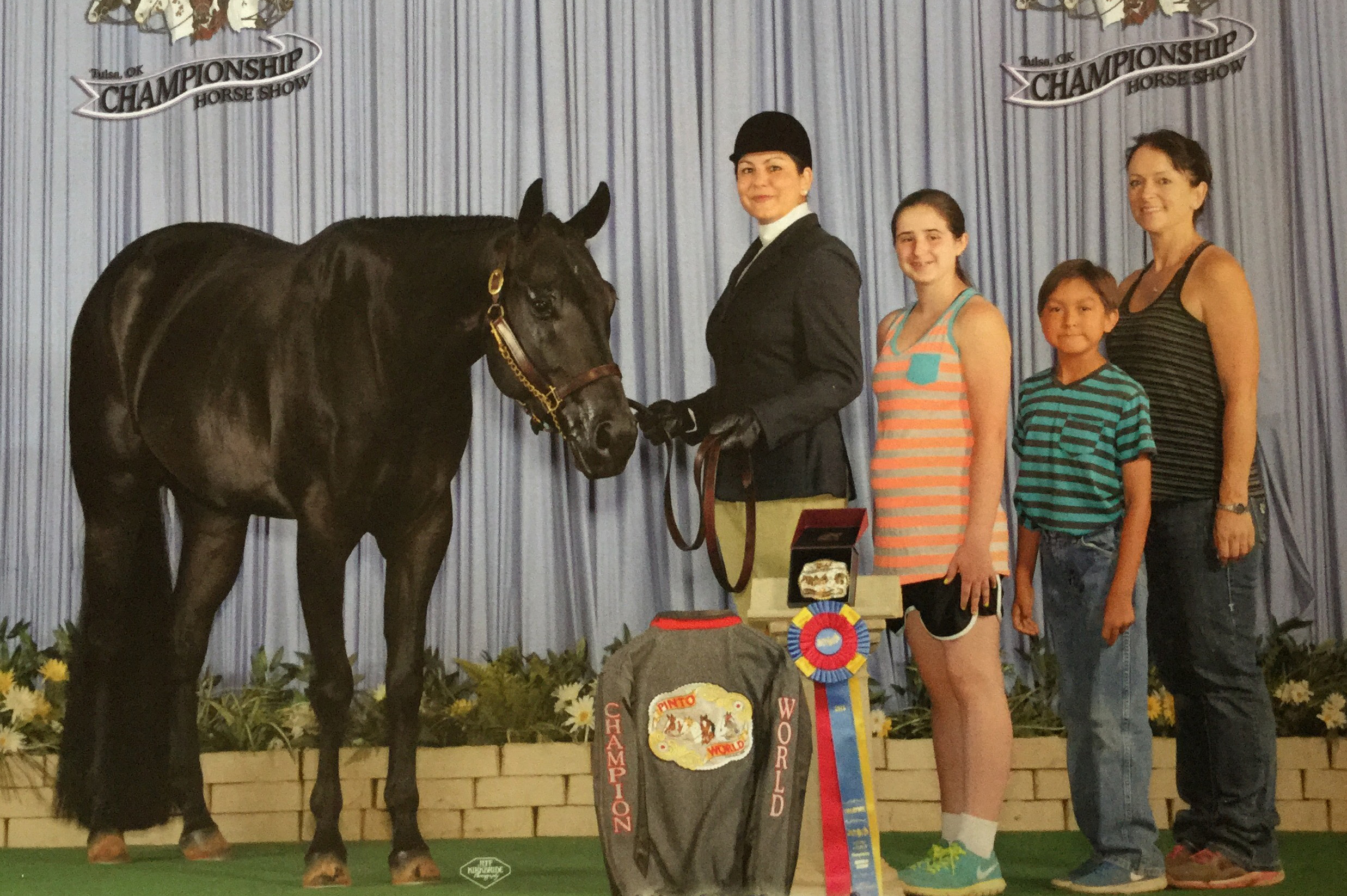 When showing and demonstrating the abilities and beauty of Pinto horses, there aren’t much better than Anderson and her 8-year-old nephew Kristofer.

From June 8-20, the duo competed in the 50th Pinto World Championship Horse Show in Tulsa at the Built Ford Tough Livestock Complex at Expo Square.

“I love horse showing because it gives me a goal to work toward with my horses. It gives an opportunity for my husband and I to share together our love and passion for horses,” Anderson said. “Pinto shows give me an opportunity to share my love and knowledge of horses with my nephews.”

What was once a hobby, Anderson has turned horse showing into a chance to teach and mentor her nephew and they have been working together for the past two years. Raising and taking care of horses has been a great way to spend time together and share in the love of horses, she said.

According to its website, the Pinto World Championship Horse Show is one of the largest gatherings of Pinto horses, ponies and miniatures in the United States. The participants show a wide range of disciplines to demonstrate in front of judges, which include: Western, English, driving, pleasure, halter, roping, speed events and trial.

Anderson has been riding and showing horses for about 10 years, she said. Her and her husband currently own eight horses, mostly broodmares and one baby horse.

Kristopher showed Pickles in his categories.

“It felt really good! I like that I won a first place ribbon, belt buckle and a third place ribbon because now I am a World Champion. Pickles did great,” Kristopher said.

Anderson competes year round with her horses Pickles and Scotch, going to horse shows around Oklahoma, Missouri, Texas and Tennessee. She has won ribbons, belt buckles, trophies, and chairs, as well as other high awards.

“In the past 10 years I’ve probably won over 25 belt buckles, several trophies and eight World Championship titles,” she said.

She attended Oklahoma State University and upon graduating she began working for the Bureau of Land Management’s wild horse and burro program. During this time is when she met her husband Glade, who also worked for the Wild Horse and Burro Program. Anderson also served on the First Osage Nation Congress and is the Nation’s first female Speaker of the Congress.

She said horses have always been something that she and her husband enjoy together. They love to spend time together, riding and showing their horses.

“I love the journey that it takes to get a horse ready for competition, I love the time spent at the barn, the life lessons learned along the way and the friendships that I make during the journey,” Anderson said.

Revard is the son of Hermes and Kim (Revard) Sanchez and grandson to Maynard and Carole Revard and nephew to Faren Anderson and Cody Revard.