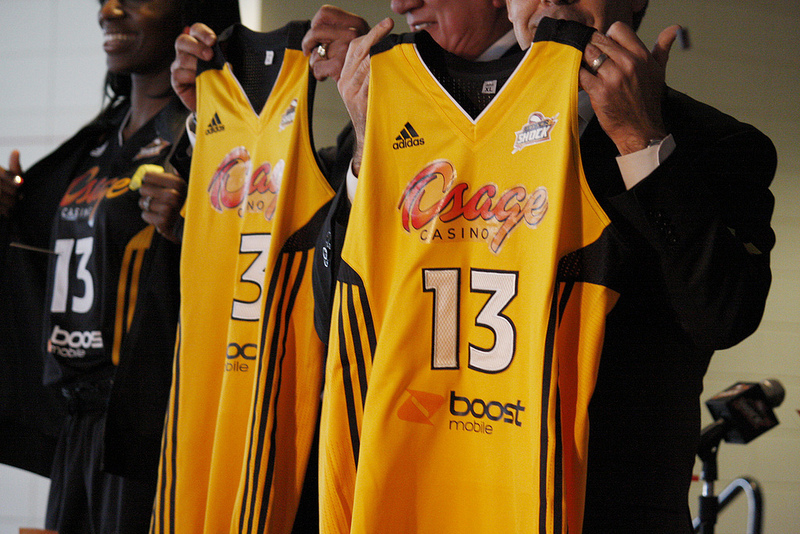 TULSA, Okla. – The Osage Casino sponsorship agreement with the WNBA Tulsa Shock will end after this season as the team plans a move to Dallas-Fort Worth – a decision announced by its majority owner on July 20.

In 2013, the Osage Nation’s seven-casino gaming enterprise entered into a multi-year marquee partnership with the Shock that was due for extension consideration this year. Osage Casino management was in negotiation talks with the Shock to extend the sponsorship after hearing a presentation from Shock President Steve Swetoha at the May Gaming Enterprise Board meeting.

The Tulsa Shock is owned by a group of about 12 people, including majority owner Bill Cameron who filed a change of venue request with WNBA league officials for the Shock to relocate to the Dallas-Fort Worth market. Cameron sent an email to minority owners citing money losses while the Shock were in Tulsa and better business prospects in the DFW metroplex. The Shock moved to Tulsa from Detroit in 2010.

“This was a difficult decision driven by the economic realities of the past six years,” Cameron told the minority owners in an email announcing his decision. “Though losses have narrowed thanks to the Osage Casino sponsorship and increased revenues from the league, as you know we have experienced consecutive years of operating losses. As a result, I have willingly paid $6.2 million to ensure we covered the losses and kept the team and organization viable.”

On July 23, the WNBA league announced its approval of Cameron’s request for the Shock relocation. Starting with the 2016 season, the Shock will play its home games at the University of Texas–Arlington campus. The proposed move is also subject to approval by the Texas university system’s Board of Regents, according to the WNBA statement.

Osage Casino CEO Byron Bighorse said he was notified earlier in the day July 20 of the relocation announcement and was told the casino sponsorship will remain valid for the remainder of the season and the remaining game schedule will continue as is.

“Since we were in negotiations to extend the sponsorship, we will not be obligated to the Shock after this season,” Bighorse said. “We are sad to see the Shock leave Tulsa but we also understand that business is business and tough decisions have to be made. We are not currently seeking alternatives at this time and we will look at other opportunities in the surrounding communities in the future.”

The Shock and Osage Casino announced its marquee sponsorship agreement on Jan. 31, 2013 at a news conference held at the BOK Center with officials from the Shock, Osage Nation government and Gaming Enterprise in attendance. As part of the sponsorship agreement, the casino enjoyed an increase in publicity and signage exposure, which included the casino name emblazoned on the front of the Shock player uniforms.

In addition to signage visibility, the sponsorship agreement also included traffic driving promotions, game broadcasting and events and community programs. As part of the community programs portion, Swetoha said in 2013. In May, Swetoha said a renewed sponsorship agreement would’ve included an increase in cable TV-televised games in the upcoming season.

The Shock has drawn an average crowd of 5,444 thus far this season, according to the Tulsa World. The final Shock game will be in the BOK Center on Sunday Sept. 13 against the Phoenix Mercury.