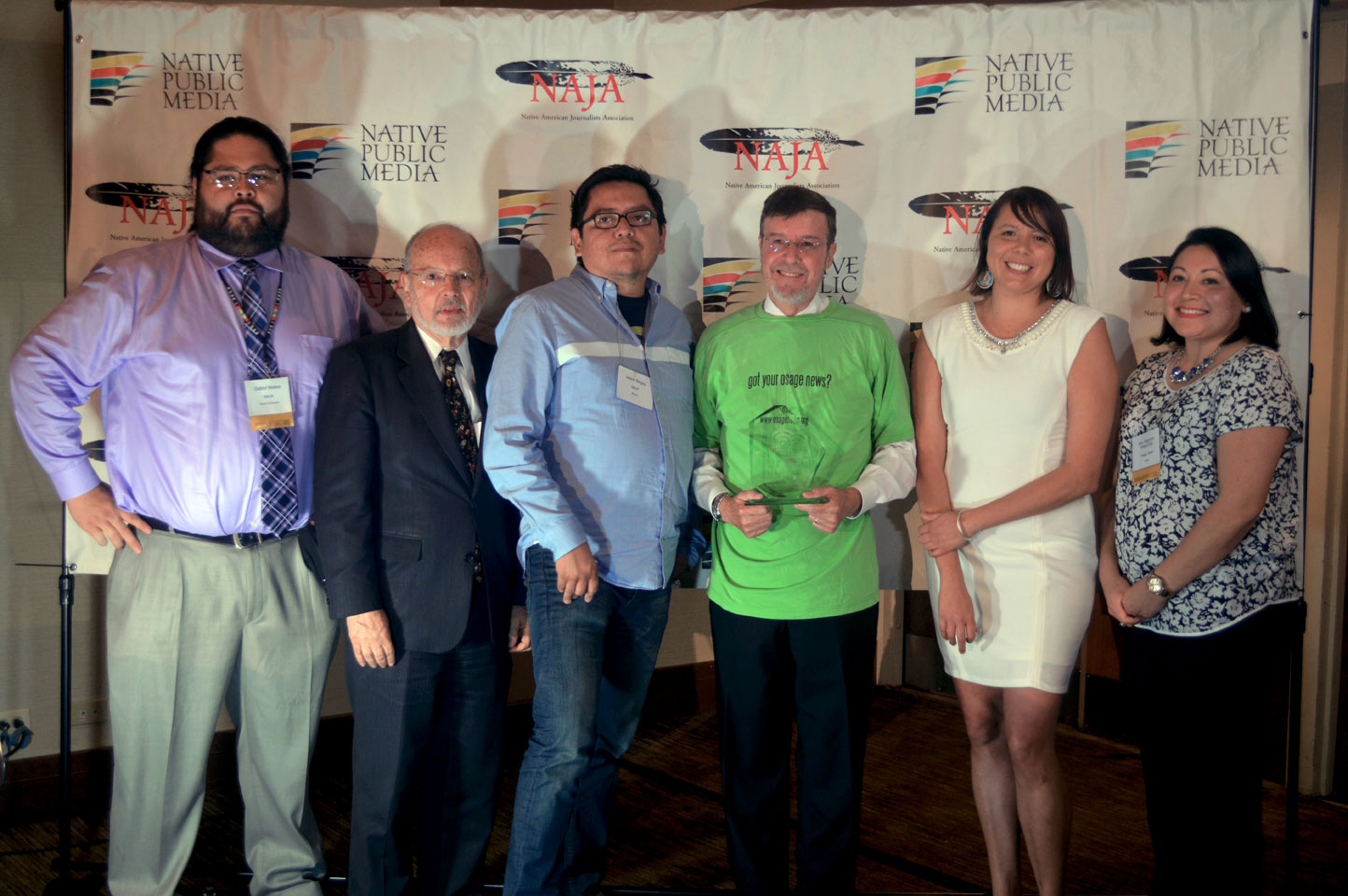 WASHINGTON – The Native American Journalists Association selected former Osage News Editorial Board member Denny McAuliffe as the recipient of the 2015 NAJA-Medill Milestone Achievement Award, which recognizes important contributions made by journalists in the past and encourages newer generations to achieve their own career excellence.

McAuliffe (Osage) is an Army veteran, a former University of Montana journalism professor, co-founder of the former American Indian Journalism Institute and has worked as an editor at The Washington Post for more than 20 years in two stints. He served on the Osage Nation’s inaugural editorial advisory board and won the 1995 Oklahoma Book Award for Non-Fiction for “The Deaths of Sybil Bolton: An American History,” about the “Reign of Terror” murder spree against the Osages in the 1920s and incorporating his own Osage family history.

Former NAJA President Mary Hudetz nominated McAuliffe for the award, citing examples of McAuliffe’s impact on Native journalism, with a focus on the launching of Native students’ careers. Throughout the 2000s, the former AIJI yearly summer program was based at the University of South Dakota and trained scores of Native students from across the United States and Canada in the basics of news writing, reporting, photography, ethics and multimedia. McAuliffe, along with other professionals with daily news industry experience, donated their time and expertise to teach and mentor the AIJI students.

“It’s hard to capture the full scope of his impact during his decade at UM, where he started Reznet and operated it as a vibrant website filled with student voices … The American Indian Journalism Institute launched dozens of careers in media. Portions of NAJA’s current (Native American Journalism Fellowship program) are now modeled after AIJI,” Hudetz said in her nomination letter.

The NAJA Board of Directors selected McAuliffe as the winner through a vote after reviewing all nominations.

McAuliffe accepted his award during a July 11 NAJA Native Media Awards banquet held during the organization’s annual National Native Media conference in Crystal City, Va. – across the Potomac River from Washington. McAuliffe expressed his gratitude for the award and acknowledged many of the currently-working journalists in the audience who were once students of his at AIJI or the UM campus in Missoula.

McAuliffe said one of the first rewards he received after hearing the news of receiving the Medill award was receiving a phone call of congratulations from the first Native student he recruited to UM. Using his trademark storytelling and teasing wit, McAuliffe recalled that he drove to the student’s Spokane, Wash., high school to meet with her and even offered to help care for her dog if she moved to Missoula. “I didn’t think there was anything unusual about my approach – to me, that’s the way it’s supposed to be,” he said in his acceptance remarks.

McAuliffe repeated his message in acknowledging another mainstream journalist and former AIJI student, whose internship writing faux pas led McAuliffe to make “the wisest decision I ever made on Reznet.” McAuliffe recalled the student wrote an internship application cover letter to the program director with the greeting “Hey Karen, what’s crackin’?” – he didn’t get the internship.”

“I said ‘Oops! Better get the students some guidance on resumes and cover letters,’ so I asked my longtime friend and retired Washington Post recruiter Bill Elsen to join Reznet and that was the start of Reznet and AIJI students racking up internships all over the country,” McAuliffe said, adding the student later went on to a reporting internship for the New York Times. “A student made the program better and isn’t that the way it’s supposed to be?”

Osage News Editor Shannon Shaw Duty who attended the summer AIJI program while she was a University of Oklahoma student also received recognition. “I only have four words to say about Shannon: Got your Osage News?” McAuliffe said as he unfolded a green printed T-shirt the newspaper previously distributed with the four-word phrase on the back. “She took a PR-rag controlled by our Principal Chief and turned it into one of the best tribal papers and websites in the country, and isn’t that the way it’s supposed to be?”

Support for the award is provided through NAJA’s partnership with the Medill School of Journalism at Northwestern University. 2015 marks the second year Medill has sponsored a $5,000 prize for the winner.

According to a NAJA statement, McAuliffe has been an editor at The Post for more than 20 years in two stints: from 1983 to 1999, mostly as an editor on the Foreign Desk (he’s proud to have worked for the legendary Executive Editor Ben Bradlee), and for the past five years, mostly as night editor for the financial news section, enjoying his bleacher-seat view of the dawn of the Amazon CEO Jeff Bezos era.