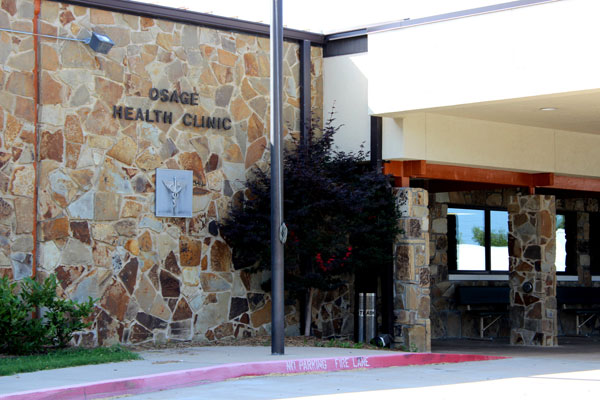 The Osage Nation has compacted with the Indian Health Service to take control of the Pawhuska clinic on Oct.1.

What Nation officials want Osage citizens to know, is that services are not going to be taken away. All services that exist currently will stay, the Nation, however, is adding additional services and staff to improve the facility.

“Everything’s going to happen real fast,” said Principal Chief Geoffrey Standing Bear. In terms of what new services and staff the Nation will implement, those will be decided over the next year and forward by the ON Health Authority Board (ONHAB), Osage citizens and input from patients.

“Shared responsibilities” is the quick and easy definition of compacting. Under the IHS Self-Governance Act of 2000, which is part of the Indian Self-Determination Act of 1975, once entering into the compact the Nation would receive funds as a lump sum and that amount is negotiated with the federal government.

Once the Nation receives those funds they are free to program that money to carry out the missions of health system delivery to the people, Standing Bear said. The Nation can also revert back to full IHS control in the future, if it chooses.

Melanie Fourkiller, a Cherokee health consultant with Advocates for Native Issues, has been helping the ONHAB with the transition. She said it’s still too early to name what services will be added but the ONHAB will be making those decisions based off of the community meetings held earlier this year.

IHS by the numbers

In 2014, outpatient visits for Pawhuska Clinic numbered 28,814 and Primary Care visits were 9,750. The Pawnee Service Unit, including Pawhuska and all other facilities, had a total active user/patient population of 16,656 in 2013. Osage active patients numbered 2,450 in the 2013 IHS User Population Report, and comprise the largest resident Tribe within the IHS Pawnee Service Unit, she said.

The 2015 fiscal year budget reported by IHS was approximately $3.2 million, this includes only the federal IHS appropriation and does not include third party resources such as Medicare and Medicaid, she said.

The 2016 fiscal year budget for the Pawhuska clinic, according to the Chief’s Office is:

It has been a long road for the many Osages involved in making the IHS compact a reality. What started in the Jim Gray administration as the Health and Wellness Advisory Board, stalled in the John Red Eagle administration, but has been carried out in the Standing Bear administration.

Many of the players have come and gone, but those consistent from the beginning have been Dr. Ron Shaw, Tim Tall Chief and Cecelia Tallchief. The current Health Authority Board consists of Margie Burkhart, Michael Moore, Nancy Keil, Patrick Tinker and Tallchief.

Principal Chief Geoffrey Standing Bear said compacting the Pawhuska IHS clinic was something he and Assistant Principal Chief Raymond Red Corn set out to do from day one. With the help of Osage Congressmen Shaw and Norris, the agreement was signed into law on July 16.

In the meantime the Health Authority Board is busy planning which new services will be implemented on Oct. 1. A ribbon cutting is planned, as well as a new name for the facility, but that date will be announced at a later time.

On the day the legislation was passed by the Fourth Osage Nation Congress to enter into the compact, Congressman Ron Shaw said this:

“It is no longer what IHS says goes. What they decide we have to live with. We are the decision makers now. After today, it will be the Osage Nation’s decision - we will truly be in control of our health destiny here on the reservation.”