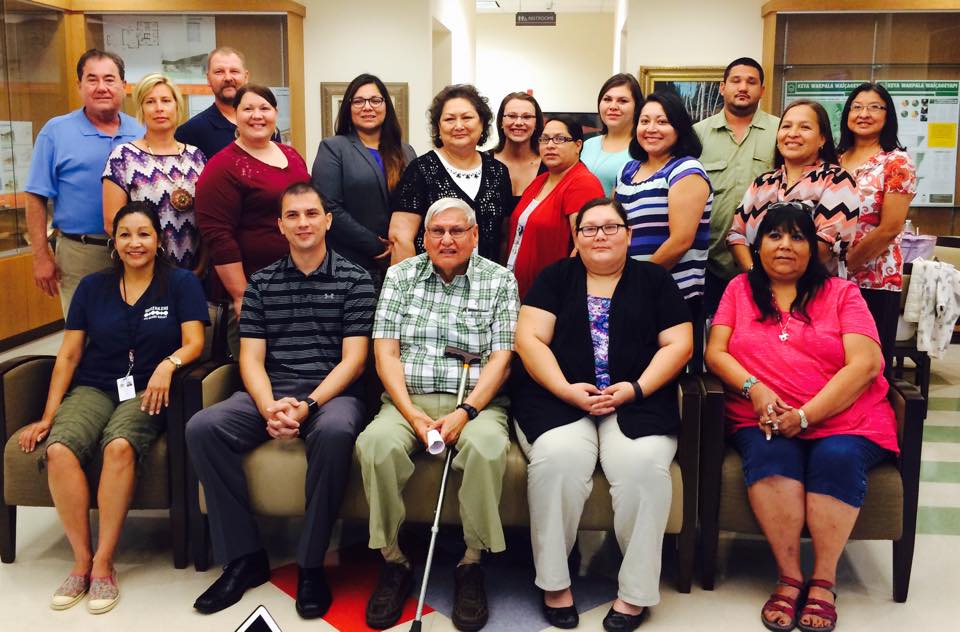 For the first time in the history of the Osage, a language immersion school is being implemented to save the Osage language from extinction.

Next year, the Nation plans to implement first grade, and second grade the following year and so on, to follow the first class of students.

Principal Chief Geoffrey Standing Bear said he attended private school for his early education and wanted for all Osage children to have the same benefits he did. The education division is currently working on high school and junior high initiatives.

“Someday we’ll be moving from [these beginning students] to more students and older children,” Standing Bear said. “We’re here to serve your children. They’re going to be happy, well fed; we just want the best education for them. Science, history, math, we want them to know the world and I would like for them to know the most about the Osage language and culture as we can provide so they can we very well rounded students.”

The immersion classes will begin Aug. 17 and the curriculum doesn’t just involve class time. Since the Osage language can’t be heard at the local grocery store or on television, it will take the parents and family members of the children to keep the language spoken at home.

The children are required to have an 85 percent attendance rate or they will be dropped from the program, said Debra Atterberry, senior advisor for Standing Bear. There is a waiting list.

Parents and family members are required to enroll in the evening Osage Language classes and attend a monthly Saturday meeting to preview and review what their children will learn the following month.

"It’s a big commitment and will take sacrifice," said Herman “Mogri” Lookout, Osage Language Department director. He said the parents will have to speak Osage at home for the program to be successful for their children.

“I’m not going to say the language is easy, it’s very hard … there are things in there that has a different concept – you’re going to be exposed to another way of life, which is something we’ll deal with when we come to it,” Lookout said. “We want you to embrace these children when they get home so they don’t lose [the language], they’ll hang onto it and the only way they can hold onto it is you have to embrace it, you have to caress, and you got to love this language as much as we love teaching it.”

The children’s immersion class will end at 10:45 a.m. and they will return to their classrooms. Their classrooms will no longer be a day care setting, Atterberry said. There will be more CDA certified instructors in each classroom to provide a more nurturing, hands-on setting for the children. Curriculum will expand to more culture, language, art, social time, outside play, nature walks, as well as the curriculum the former Head Starts implemented.

“With the parents coming together and bonding over what their children are learning at WELA, I think we’re going to have a real language explosion,” Atterberry said.

Geneva HorseChief-Hamilton, whose sixth child, 19-month-old daughter Wahreshe Rose, will be in the 0-2 year old class. She said learning the language was always stressed by her grandmother Hazel Harper.

“[My grandmother], she said one of these days she wished there would be a baby that could have Osage spoken to them,” HorseChief-Hamilton said as she fought back tears. “It means a lot to our family, so thank you so much.”