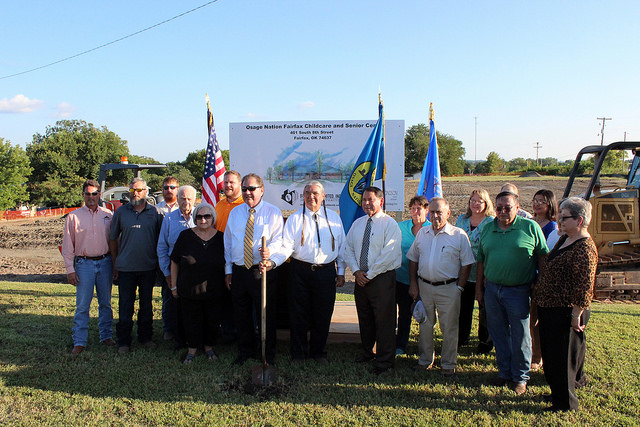 Bruce Cass, director of the ON Tribal Development and Land Acquisition Department, called the event “a momentous occasion for the Osage Nation” to provide services for the Fairfax/ Grayhorse District’s children and elders.

In 2014, the Third ON Congress passed a $3.3 million appropriation bill (sponsored by then-Congressman Standing Bear) that was later reduced to $3 million for the Fairfax facility construction with the remaining $300,000 designated to cover the Nation’s investment in bringing a grocery store to the Fairfax community.

According to Cass, the dual-use building is 10,000 square feet and will contain: six classrooms and a commons area in the child care center; the senior center side contains a commons area, an enclosed playground and two FEMA storm safe rooms. Both facilities will share a commercial-size kitchen in the center of the building to serve meals for both child care and senior programs.

Currently, the Nation’s Elder Nutrition program (formerly called Senior Services/ Title VI) cooks all of its weekday lunches out of its Pawhuska facility before they are delivered to elders throughout the Nation’s jurisdiction who are not able to attend the congregate lunches served in Pawhuska.

Standing Bear acknowledged several tribal officials attending the event, including Congressman Archie Mason who co-sponsored the $3.3 million appropriation bill for the Fairfax facility, as well as the elderly and child workers. Standing Bear said the facility will give much-needed extra space for the programs who do “a great job.”

“We do understand this is a new type of design where the kitchen area and dining room will be in the center and then we have the Title VI and the children and the people that worked on this emphasized how the elders and the children can interact, but also stay in separate areas as they wish and I’m looking forward to seeing how all this develops,” Standing Bear said, adding the Fairfax model could be one used at future facilities in other Osage communities depending on its progress.

Fairfax Mayor Burley Hathcoat also praised the senior center and child care center project. Hathcoat said he also hopes the facility “inspires other businesses to come here, other projects, maybe the tribe will have more money and put something else here, we’ll welcome that as well.”

The Nation is working with architectural firm YWS Edmondson and construction contractor firm Builders Unlimited, Inc. on the Fairfax project. Both firms are Native American-owned with Tulsa offices.

According to its website, Builders Unlimited built the restrooms building at the Grayhorse village arbor, which were completed and opened for this year’s In-Lon-Schka dances.

Congressman Ron Shaw also praised the project, considering the facility will be a new building versus occupying older buildings that were purchased or leased by the Nation to address space needs. “This time it’s a new structure, one that we can truly be proud of that’s magnificent. Not an abandoned building or one that’s full of asbestos or other limitations… I’m hoping this new structure will be a shot to it’s arm (Fairfax), to its appearance, to its economy,” he said.

Mason, of the Grayhorse District, like Shaw, said “we are indeed fortunate to have the abilities now to provide these kinds of services for our elders and for our children. I like, indeed, the idea of our elders and our children together… (children) are full of energy, our elders have so much to share with the children and it’s going to be a good mix.”