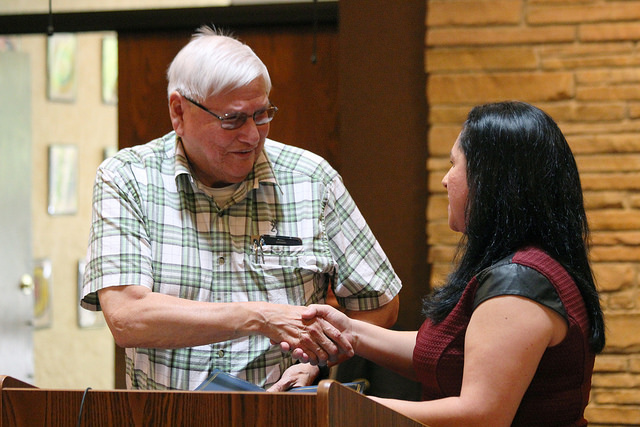 On Sept. 21, the Fourth Osage Nation Congress passed a resolution commending ON Language Department Director Herman “Mogri” Lookout for his leadership and efforts in preserving the Osage language.

The Congress unanimously passed resolution ONCR 15-24 acknowledging Lookout, who was present to receive his written citation from the Congress following the vote. Congresswoman Angela Pratt, who is the current chairwoman of the Congressional Cultural Committee, sponsored the resolution and presented it to Lookout.

According to ONCR 15-24, Lookout’s language service dates back to when he first taught the language in his home and at Wakon Iron Hall in the Pawhuska Indian Village before serving as language department director, a post he’s held for more than 11 years.

Lookout “developed the idea for the creation of the Osage orthography and submitted the written form of our language for inclusion in the Unicode,” said the resolution. The Unicode Consortium enables people worldwide to use computers in various languages, according to its website.

Lookout expressed thanks for the recognition, adding, “I want this language to go on forever.”

ONCR 15-24 also states: “Lookout is hereby recognized and commended by the (Congress) for his decades of service to the Osage people as a man who has never forgotten how important our language is to the future of our culture, and for his dedication to preserving the language and teaching Osage to all of us.”

In a separate vote that day, the Congress also unanimously passed ONCR 15-25 (also sponsored by Pratt) that states the ON Congress is adopting and approving the Osage orthography developed by Lookout and refined by the Language Department. Lookout also acknowledged those who helped him with the language teachings, orthography development and language influences, which included past Osage elders.