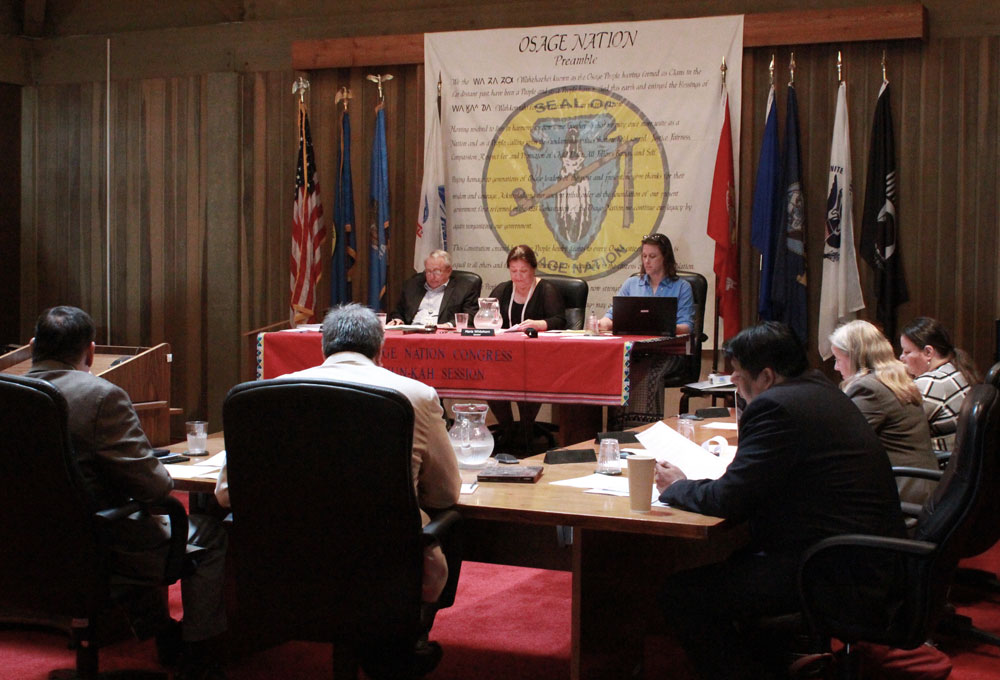 Congress confirms board nominees, with hesitation from some members

The Fourth Osage Nation Congress confirmed eight board appointments to the boards of the Health Authority, Bluestem Ranch and the Osage News.

The first appointment considered was Dr. Patrick Tinker for the Health Authority Board. He was confirmed for a three-year term with a unanimous vote.

Following his confirmation the Congress considered the appointments to the five-member Bluestem Ranch, LLC, board.

The first appointment was former Osage Congresswoman, and the Nation’s first female Speaker of the Congress, Faren Anderson for a two-year term. Making a statement against her nomination was Congressman Ron Shaw who said Anderson had many qualifications but he did not think she was suited for the work the board would be doing. Congresswoman Alice Buffalohead said she would be supporting Anderson and felt her knowledge of the Osage government would get the board off the ground.

Congresswoman Shannon Edwards, who was the lone “no” vote to purchase the Bluestem Ranch, said she objected to how the board was set up as a subsidiary of the Tallgrass Economic Development, LLC. She said she would be abstaining from all board nominations to the Bluestem Ranch board.

Congressman William Supernaw spoke in favor of Anderson and said her experience working for the Bureau of Land Management, drafting legislation for the Congress and contract review made her an asset to the board. Congresswoman Angela Pratt said Anderson obtained her bachelor’s degree in Agricultural Economics, she’s a wild horse specialist, she owns her own business and “she has a back bone.” Anderson received 10 "yes" votes, one "no" vote from Shaw and one abstention from Edwards.

The second appointment was Francis Murphy for a one-year term. He received 11 "yes" votes and one abstention from Edwards.

Teresa Meade was the third appointment up for confirmation for a three-year term. Congressman Walker spoke on her behalf and said he has known Meade for most of his life since she is the daughter of the late Osage Congressman and rancher Mark Freeman, his grandfather. He said she and her husband have a plumbing business in Ponca City and that they also own and operate 7,000-acres on Freeman Ranch and “they’re doing well.” Meade received 11 "yes" votes and one abstention from Edwards.

The fourth appointment was Jackie Badley for a 3-year term. She received 11 "yes" votes and one abstention from Edwards.

The Osage News Editorial Board appointments were last to be considered for confirmation.

Teresa Lamsam, who has served on the board since the Free Press Act of 2008 was enacted, is the appointment for Principal Chief Geoffrey Standing Bear.

The makeup of the Editorial Board is the chief picks one appointment, the Congress picks the second and both of those individuals select the third board member, which is currently Jerri Jean Branstetter.

Congresswoman Edwards spoke highly of Lamsam and said she “breathes professionalism” and she is pleased she will be serving again. Lamsam received a unanimous vote in favor of her confirmation.

The final appointment for consideration was Lura King, who was the Congressional nomination for the Editorial Board. She was the only nominee present at the Congressional Session and Congresswoman Edwards said King is professional, has a good listening ear and thought she would serve “admirably.” King said she was “honored and privileged” to serve again on the board and she had a deep respect for the Osage people, having been raised in Pawhuska. King received a unanimous vote in favor of her confirmation.