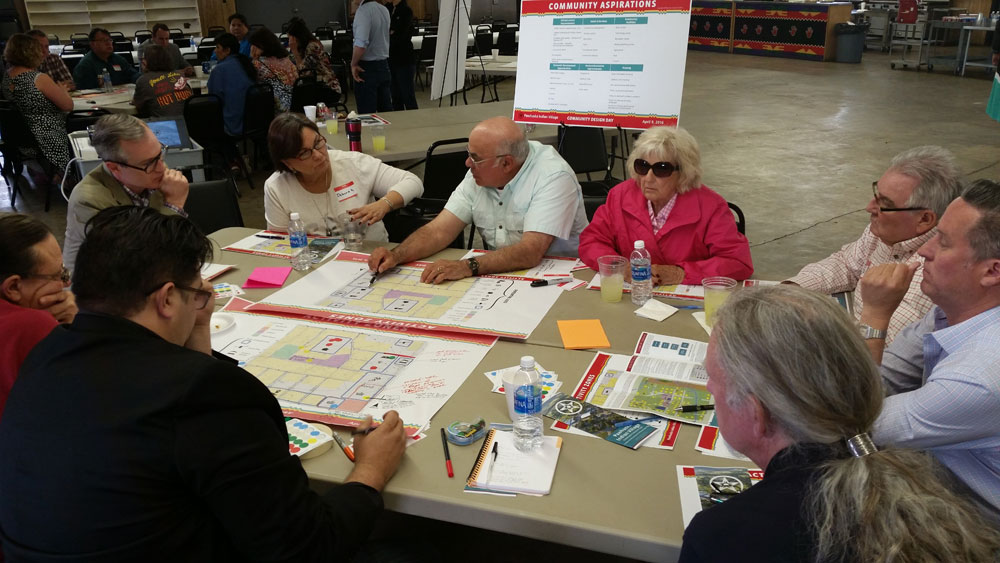 On April 9, the village committee invited residents to meet with planning consultants for a “design day” for residents to brainstorm and contribute more suggestions. The village committee (Five-Man Board) is working with several planning professionals on the master plan, which aims to improve the village infrastructure and amenities to retain and attract residents who live in the village, which hosts the Pawhuska In-Lon-Schka dances each June – becoming a cultural hub for participating Osages.

“This is so important to the village,” said committee Chairwoman Paula Stabler who pursued the master plan along with other board members to continue improving the village by addressing common complaints including water line issues, addressing abandoned/ dilapidated homes, flooding caused by rain and other needs voiced by residents.

In a news release, Stabler said: “Over 150 years ago, our ancestors came from Kansas. At that time each village started off with 160 acres. Today we have less than 25 percent of original Osage land left. The time is now to protect our village and make the improvements needed. It’s our responsibility for future generations.”

“We’ve had a lot of meetings to find out what the village wants,” said Scott Moore de Medina, co-founder of Blue Star Studio. As an example for future development, the village sought a land survey, which identified where the utilities are and that information will be helpful for finding future uses for village land, he said.

According to master plan brochure information, there are approximately 80 lots open for development in the village, prompting questions from planners to village residents about future land uses.

Jackie Keliiaa, a community builder/ planner with Blue Star, said the planning took the Osage culture and people into consideration when the planners met with the residents. “We met and asked: What are the values? What does it mean to be Osage?” Moore said the master plan is being done by “Indigenous planning and design approach – that’s what makes you all in the village unique.”

According to compiled village resident feedback, the following are listed as common beliefs and qualities important to village residents: Protecting culture, the Osage language, the In-Lon-Schka dances, gatherings including handgames and gourd dances, sovereignty, self-governance, capable workforce, family-friendly and self-sufficient.

Committee vice chairman Ryan RedCorn said: “Our goal is to create an ecological and economical sustainable Indigenous village model reinforced by responsible civic policy. We want to ensure that Osages will have a place to live and be active in the Osage culture. This requires Osage proximity to one another to share culture and tradition, supported by an economic and environmental base.”

That day, approximately 30 residents participated in the “design day” meeting to issue more input on the master plan. Village resident Deborah Yates said she believes there should be more amenities or housing opportunities for elders. Other residents believe other nearby shopping amenities could also be available in the village. Moore and other planning officials noted land-rezoning efforts would be needed to address other uses besides residential living.

Principal Chief Geoffrey Standing Bear, who attended the meeting, said his office is in support of the master planning efforts and told Stabler and the board to contact him whenever they’re ready to move forward with future plans and he will contact other ON entities including the Roads and Tribal Development and Land Acquisition departments for planned projects.