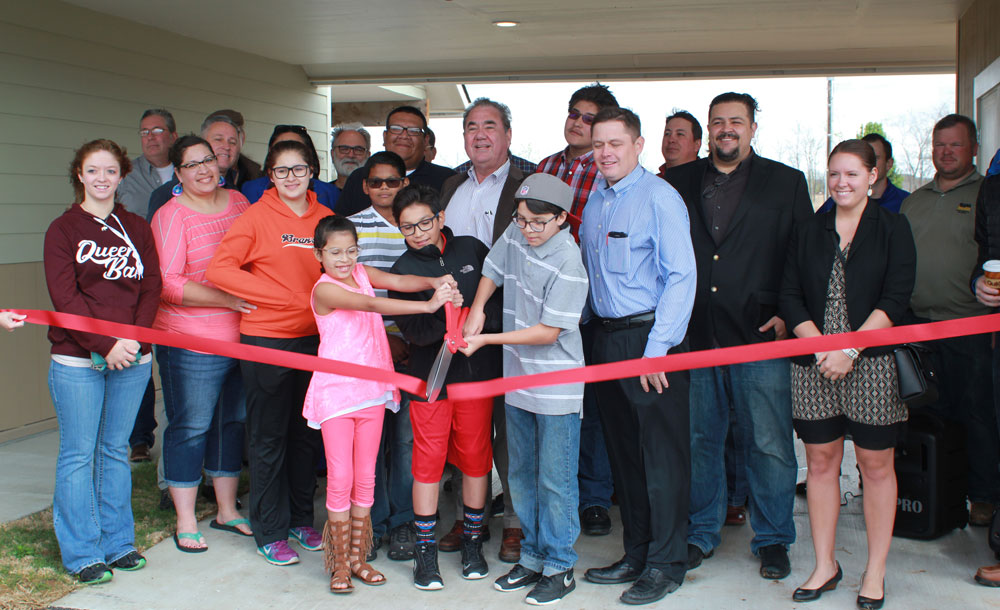 Osage families move in to Sky Lodge Estates; plans being made for additional homes

“Congratulations to everyone that has worked on this project for the last two to three years. In this country, every American family that works should have the opportunity to have their own home,” said Osage Nation Principal Chief Geoffrey Standing Bear. “Working in partnership with the city of Skiatook, HUD, the NAHASDA program, the Osage Nation, all the programs working together – we have established an opportunity for families that work to achieve that role of having Home Ownership.”

Families moving into Sky Lodge Estates cut the ribbon to officially open the property for move in on March 29.

“To get this far a lot of people have to work together … an essential component of this is the Housing and Urban Development program, which allows those of you who have qualified for the program, and these are not inexpensive homes, each one is over $200,000 each, some over $230,000 each, but they are within reach of working families,” Standing Bear said. “With the cooperation and funding from the HUD, this is a program I learned two weeks ago when I was in Washington D.C., is scheduled for elimination by the fed government next year. This program assists working families in achieving their dream of home ownership.”

The Nation broke ground on the 15-home subdivision in February 2016. The rental and rent-to-own subdivision is located off Lenapah Avenue south of State Highway 20. The 15 homes are a mix of three- and four-bedroom housing units and were constructed with federal NAHASDA grant money awarded to the Nation.

“I’m very honored to be out here, been waiting for a long time to get our own house and it’s finally here - so it’s a dream come true,” said Bobby Unap, who qualified with his wife Regan for a four-bedroom home with their five children. “Thank you very much for all the work that everyone put into it. I’m really thankful the Osage Nation was able to help out and be a part of this. We worked really hard with the Nation in getting the right house and this is the right house for us.”

First-time homeowners, James and Ashley Cosby, said they were ecstatic when they found out they had been chosen to own a new four-bedroom home. They have three children, two boys and a girl.

“It’s beautiful and it’s roomy and we’re just so grateful and blessed,” Ashley said. “All of our kids are going to have their own room.”

Standing Bear pointed to open areas of grassland on the property and said they are planning more homes for the area. He said the location of Skiatook, which is roughly 15 minutes from downtown Tulsa, is a good location for those Osages who work in Tulsa and who still maintain ties with their Osage history and culture.

“We need more housing like this, this is not free housing,” Standing Bear said. “Everyone who is going in here qualified with credit scores to get this housing. The partnership that it took to get here should not be destroyed … the leadership of the Osage Nation will tell this to Washington D.C.”

Ashley Cosby said they applied for a home two years ago with the Nation and when Sky Lodge Estates became a reality they applied for one of the homes and kept updating their application in hopes of getting a home. They received word about two weeks ago they had received a home.

Marilyn Booth, first-time homeowner, received the keys to her new three-bedroom home she will live in with her son Athen and held back tears.

“I want to thank you guys for everything, everything’s beautiful, we’re excited to get our house and thank you for the opportunity and we’re very appreciative,” she said.

The ON housing program can be reached at (918) 287-5310. For more information on housing and to download applications, go online to:www.osagenation-nsn.gov/what-we-do/housing