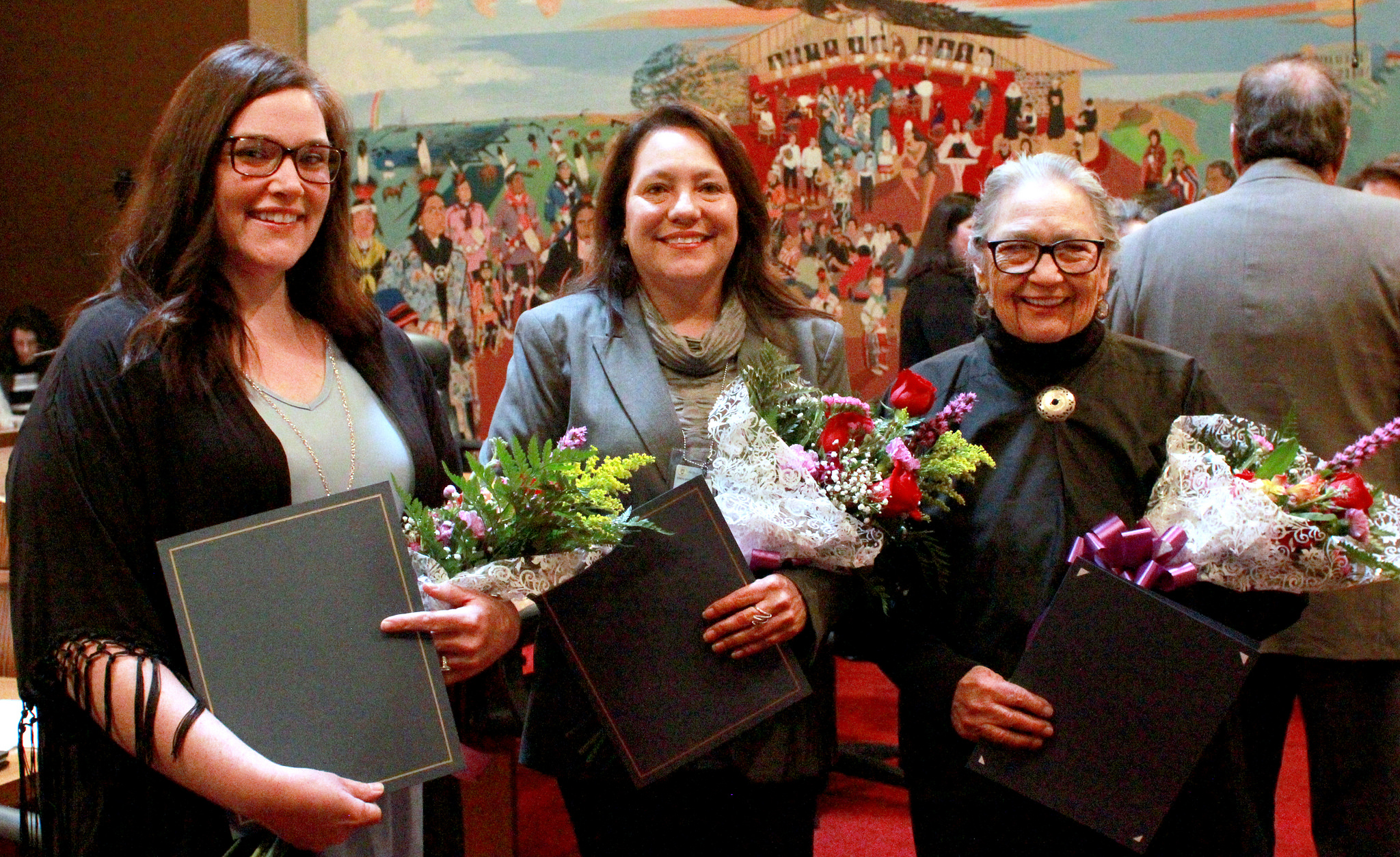 In honor of Women’s History Month, three former Osage Tribal Councilwomen were honored by the Fifth Osage Nation Congress on the fifth day of the Hun-Kah Session.

Three resolutions sponsored by Osage Nation Congresswoman Alice Buffalohead honored the late Camille Pangburn, Rosemary Wood and Jodie Revard. Each honor was a separate resolution and different members of Congress took turns speaking about each of the honorees and their contributions to the Osage Nation.

Sitting in the gallery were the family and friends of the honorees and the Wah-Zha-Zhi Youth Council, who came to observe.

“I started this last year as a way to honor Osage women in government,” Buffalohead said. She then turned to the youth council and said, “There’s a place for Osage women in our government, and so I encourage you to stay active with the Osage people and the Osage Nation and continue on being leaders.”

“I too remember Camille, and I remember how cool it was, as tiny as she was, standing shoulder to shoulder with all those men,” said Congressional Speaker Angela Pratt. “That was inspiring, that she was the only woman.”

According to Pangburn’s 2003 obituary in the Tulsa World, she was 90 years old when she died in office. Accepting the commendation on her behalf was her great-granddaughter Faith Miller, from Bixby, Okla.

Wood served on the 29th and 30th Osage Tribal Councils from 1994-2002. According to the resolution, ONCR 17-17, Wood has earned many accomplishments in the field of Nursing, serving as the Chief of the Indian Health Service – Nursing branch, and also as Special Assistant to the Director of IHS. She is also the first woman in Osage history to run for the office of Principal Chief and setting a pathway for women to file for the highest office.

Wood is currently retired and also serves as an Osage News columnist and writes monthly on energy issues affecting the Nation.

“When I think of the term ‘elder,’ I think of Rosemary Wood. A person who is kind, wise, compassionate, a problem solver, and a person who has earned the expertise in life,” said Osage Nation Congresswoman Shannon Edwards. “I think that’s evidenced by the fact that she is now writing for our newspaper, and all our members are going to learn about her – and she’s sharing herself. That’s what’s important. It’s real easy to live in your own little world, but she’s never done that … she continues to depart wisdom to our people. In my opinion there are too few of her.”

Revard served on the 31st Osage Tribal Council from 2002-2006. According to the resolution, ONCR 17-16, Revard supported government reform to give all Osages a voice and she helped to expand gaming for the Nation. Revard currently serves as the Deputy Director of Operations for the Nation.

“I’ve known Jodie for a long time. I might not be standing here today if it were not for Jodie. She was instrumental in me applying for my first job, and only job, with the Osage Nation as the Roads Department director,” said Osage Nation Congressman RJ Walker. “I remember her sitting on the 31st Osage Tribal Council, and making a councilperson cool. Not only as a woman, but as a young person. I appreciated her enthusiasm and she provided a different perspective.”

The honorees received letters of commendation and a reception was held in the lobby immediately following session.

For more information please contact the Congressional Offices at (918) 287-5559 or Congresswoman Alice Buffalohead at (918) 287-5541 or abuffalohead@osagenation-nsn.gov.