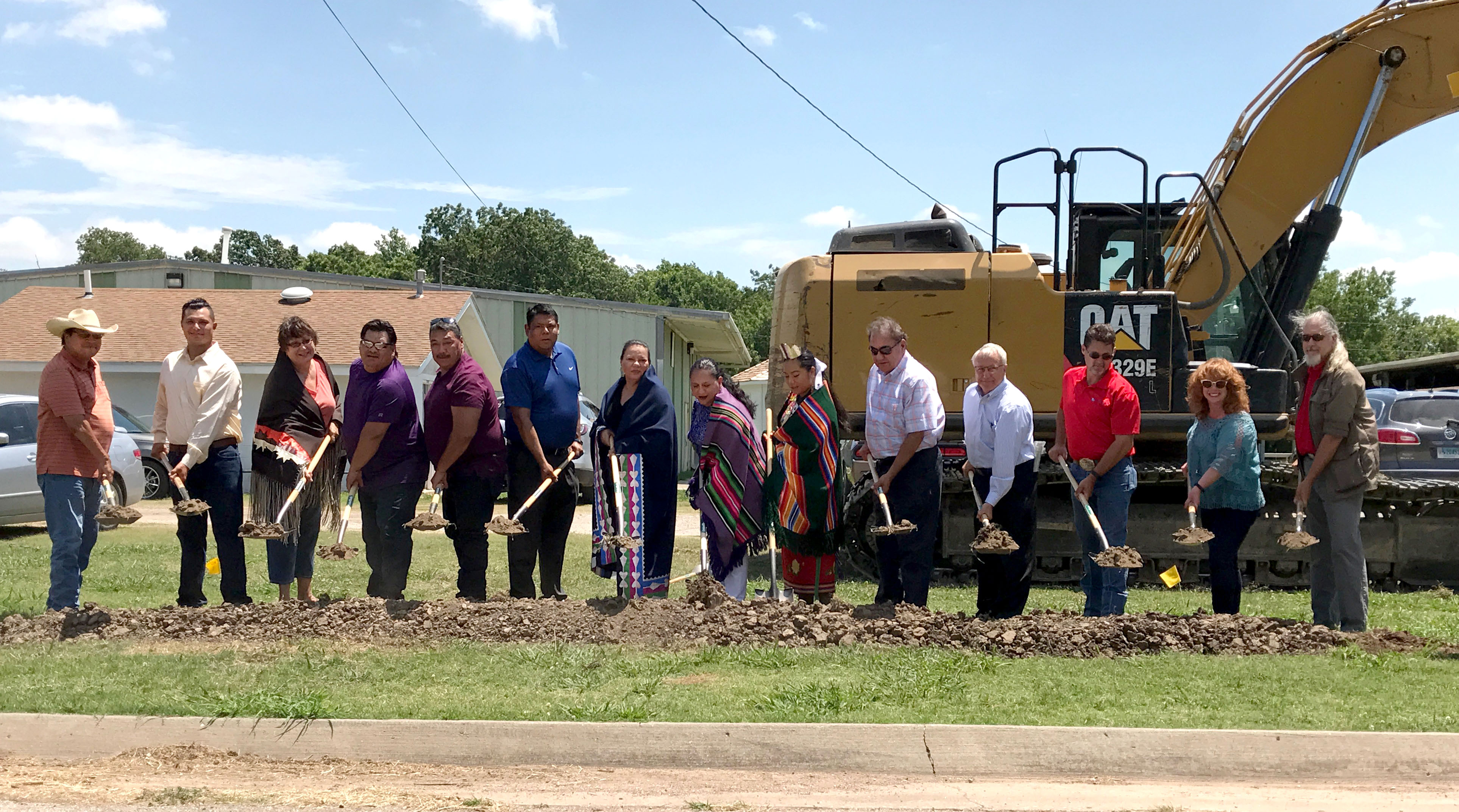 HOMINY, Okla. – A feeling of happiness permeated the hall of the current Hominy Community Building as people arrived for the groundbreaking festivities on June 28.

It was a momentous occasion, the Osage Nation broke ground on a new Village square for the Hominy District. It will include a new arbor, a new community building, a new drainage and water line system, two small parking lots and new visiting District camps.

The ceremony included the turning of dirt to officially break ground for the project, with speeches from cultural and political leaders who worked together on the project. Hominy elders were present, as well as community leaders and their families. Hominy District In-Lon-Schka Head Committeeman, Dr. Steven Pratt, spoke first.

“We’ve kept this [In-Lon-Schka] going for over 100 years, those movements, the gathering,” Pratt said to a crowd of about 40. “Those old ones said we would be here to continue forward, and it’s a good day.”

“The existing arbor will fit in the dance area of the new one. So, it was planned for about 700 dancers,” Woolsey said. “There will be a single row of seating for the dancers, and the family benches behind that. Then there’s an 8-foot aisle between the family benches and the spectators and all of it will be under cover.”

The ground construction under the plaza area will be “pretty extensive,” he said. Underneath the plaza will be about two feet of open grated rock that will store water until it comes out. Six-inch water lines will run west and east of the Village square, the east line is already completed, and a new drainage system will be put in north of the Village square, he said. Flooding has been a problem in the past when there have been severe rains.

“The plaza between the community building and the dance arbor will be done out of permeable pavers, so the water goes down below and won’t be sitting on top and all soggy,” he said. “The down spouts will go directly down into [the drainage system], they won’t run on top of the ground and all the water gets collected and taken to the creek.”

Pratt said when the Osage made the move to Oklahoma, they decided to leave their old religion behind and adopt something new. He talked about Wah-Tiah-Kah seeing a future for the Osage in Oklahoma.

He said many tribes brought different religions and dances to the Osage, but it was the Kaw that brought a drum to the Zon-Zo-Li people in the late 1800’s. The Hominy people didn’t immediately accept, they still tried other dances, but after they had council on it, they accepted the drum from the Kaw, he said.

“Osages put our own ways in there, and that’s what’s in there, is us,” he said.

Principal Chief Geoffrey Standing Bear said the groundbreaking wouldn’t be happening had it not been for the unity of the Hominy District.

“Everything that has happened thus far has been a result of this community,” he said.

He said there were a lot of meetings between the Hominy Village Five Man Board, the Hominy In-Lon-Schka dance committee, and everyone had a lot of expressions of how it was and what they wanted it to be, he said.

“This is really going to be something that in our time we can enjoy,” he said. “I congratulate the Zon-Zo-Li District for the leadership they’ve shown and for getting us this far.”

Speaker of the Congress Angela Pratt, who grew up down the road from the Hominy Village Square, said it was a sentimental time for her and others. She also noted that five members of the Fifth Osage Nation Congress are from the Hominy District.

“Instead of being sad today, like I’m trying to be, I’m just really excited,” Pratt said. “This is a special place to us, many of us grew up here.”

Chairman of the Hominy Village Five Man Board, Reuben DeRoin, said there are many new dancers every year and it was good to see so many young men and young women dancing under the arbor.

“It’s a little sad moving on, but it’s a continuation of what we are as a people, as a tribe,” he said. “We’re very happy to have this opportunity down here and to expand our Osage ways.”