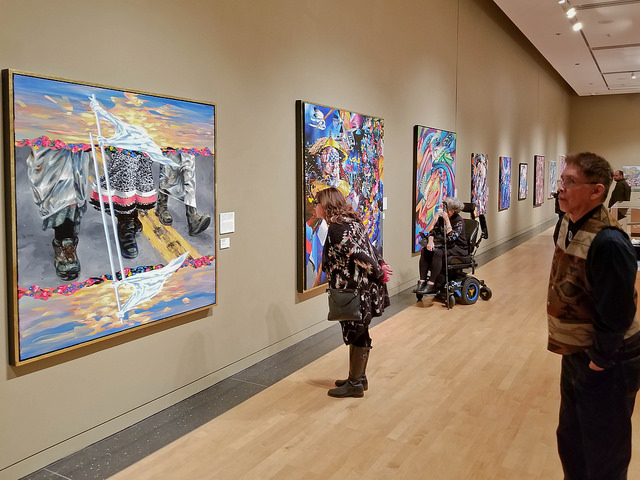 NORMAN, Okla. – Artworks produced by a family of seasoned Native American artists, including an Osage mother and son, are now on display here at the Sam Noble Oklahoma Museum of Natural History showcasing their works in photography, clay sculptures and paintings for the first time in one exhibit.

“Fluent Generations: The Art of Anita, Tom & Yatika Fields” is now on display through May 6 at the Noble museum where visitors can view the family members’ works that celebrate the vitality of Indigenous cultures and works that bring their cultural heritage to life using their respective art mediums.

Anita Fields (Osage) is a clay sculpture artist and her husband, Tom Fields (Muscogee and Cherokee), is a photographer and visual storyteller. Their son, Yatika Fields, is a painter. All three have produced works that are showcased in various museum institutions across the country.

On Jan. 19, the Sam Noble museum hosted a member reception featuring the three Fields artists who spoke with attendees viewing their scores of artworks on display. “Fluent Generations” features a mix of never-before-seen artworks as well as loans from other institutions including the Fred Jones Jr. Museum of Art, Oklahoma State University Museum of Art, the Arkansas Heritage Museum and private collections, as well as the artists’ own collections.

“The Fields family’s individuality and artistic expression deviates from that familiar model of genealogical tracing of American Indian art through single family-single medium dynasties who work in ceramics, jewelry, clay, beadwork and painting as a group,” said Daniel Swan, who is Curator of Ethnology for the Noble museum. “Tom, Anita and Yatika share personal strengths that are fostered within their family, the qualities of confidence, assurance, the ability to be verbally and visually articulate are valued and respected.”

Swan said his friendship with the family started with meeting Tom Fields in the early 1980s and Swan took interest in Tom Fields’ photography that he used with his academic works and later met the other family members. “I’ve followed the careers of Tom, Anita and Yatika visiting exhibitions, lectures, reading essays and I’ve enjoyed great fellowship with the Fields family at the annual (Osage) In-Lon-Schka dances, Native American Church services, dinners, handgames and other community celebrations and events.”

Swan recalled a fall 2016 visit with the Fields family at the museum when he asked if the family ever exhibited together, which led to Swan proposing the exhibit project and planning talks. Swan said he shared his “editorial authority with the artists, focusing on selections of works that are meaningful to each of them in this moment, some are older, many new and a few rediscovered. Each photograph, painting and ceramic piece presents an important story that contributes to our larger narrative on art, family, community and creativity.”

Tom Fields expressed thanks to the museum, to those he’s photographed through the years, as well as his family, adding “it was stunning when I first walked in there” to see the exhibit of their works.

Photographs by Tom Fields in the exhibit are either in color or black and white and capture images of Native American people and cultural events. In an exhibit statement, Tom Fields said: “Photography is also a way for me to visually define what it means to be Native. I seek the uniqueness of each individual – and the spirit of the moment – as I strive to create images that reflect dignity and hope.”

Yatika Fields also thanked various parties and individuals including those Osages who traveled from Osage Nation communities to the reception. “It’s a powerful experience to walk in there and see all that, you know… we’ve come a long way. It’s like a journey, this is how we navigate life. For me as a painter, it’s a story… it’s about a certain time in my life, I try to depict that.”

Some of Yatika Fields’ painting works are inspired by events that took place during the 2016-2017 Standing Rock (N.D.) protests where Indigenous people from various tribal nations camped and objected to the Dakota Access Pipeline project arguing the underground pipeline posed a threat to the nearby Cannon Ball and Missouri rivers. Yatika Fields and his siblings visited Standing Rock during the protests, which gave him inspiration for painting works.

“In the last year, my work has evolved from vibrant abstraction to representation of the important issues of Indigenous peoples in America and globally,” Yatika Fields said in his exhibit statement. “Once again the Native American community is being looked at as a lost page in history and I feel it is my responsibility to depict current situations with a poetic eye and painterly hand.”

Anita Fields said the exhibit “is extremely humbling, I’m very honored to be able to be here, especially with my family, making art can be a hard job … but you can depend on your family. I’m so thankful I can share this language with my children. When I watch interactions of Osage people with one another, I want you to know you’re my inspiration many, many times.”

The contemporary ceramic and clay works by Anita Fields are on display behind protection glass or are in picture frames throughout the exhibit gallery.

In her exhibit statement, Anita Fields said: “The fundamental notions of Wah-Zha-Zhi (Osage) culture and its worldview influence and inform my ideas. This perspective is based on the division of the universe into Earth and Sky; it represents the order, balance, duality, and symbiotic relationships found in life and nature. Within this context and influenced by my personal experiences, my art intends to document the evolution of our culture and represents the conflicting forces found throughout our day-to-day existence. The forms I create symbolize our disconnect from the natural world and the fading balance of our relationships to our environment.”

The Sam Noble Oklahoma Museum of Natural History is located at 2401 Chautauqua Ave. in Norman and its website is at www.snomnh.ou.edu for more information on the museum and upcoming events.