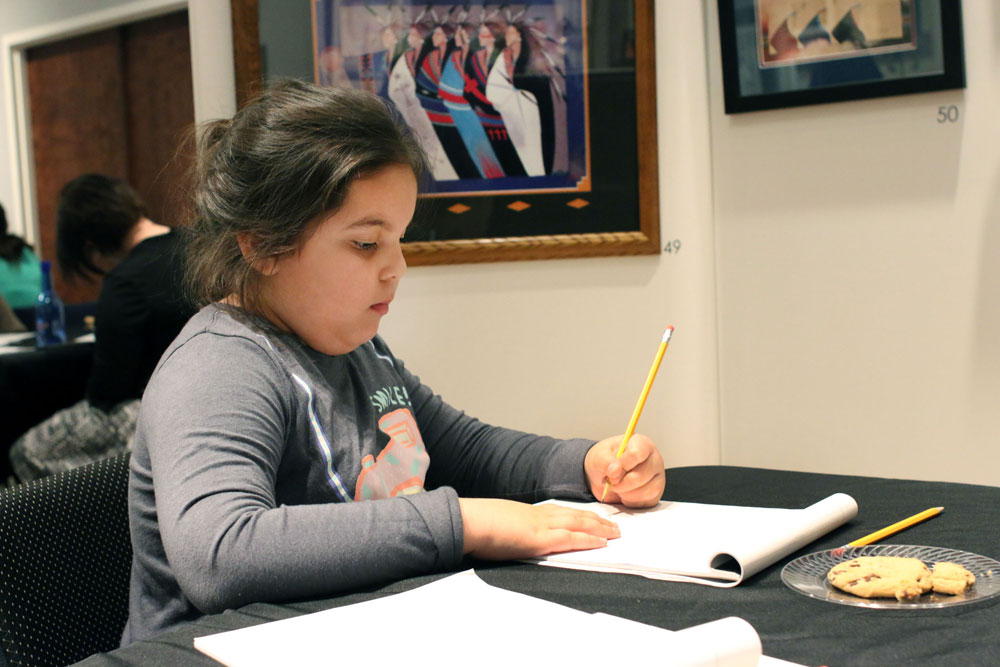 Osage writer Ruby Hansen Murray hosted a Creative Writing Workshop at the Osage Nation Museum on Feb. 1. The attendees were surrounded by the late Osage artist Gina Gray’s works, which is the latest artist’s retrospective featured at the museum.

However, it was more than just a writing workshop. It provided an outlet for members of the community to express their love for the late Gina Gray, her artwork and their experiences in Osage culture.

“It’s a really important time for women, for Osage women, and it means so much that all of you are here,” Murray said, referencing the Wak’on Owatsi, a social dance for women and girls that was happening that weekend. “Writing is really a community thing.”

There were 17 adult attendees and three children. One by one everyone stood up and introduced themselves and shared what drew them to the workshop and what they wanted to learn. Many expressed their longing to improve their writing and to find a creative outlet to help them relieve stress and express themselves.

Murray is a writer and photographer, living along the lower Columbia River, whose work appears in World Literature Today, CutBank, The Rumpus, As/Us. Winner of the 2017 Montana Prize in Creative Nonfiction, she’s a Hedgebrook, Ragdale and VONA fellow with an MFA from the Institute of American Indian Arts. She teaches creative writing in tribal and community settings. She’s from the Hominy district, related to Murray, Johnson, Pettit and Morrell families. She also writes a monthly column on Osage culture for the Osage News.

Dena Cosby, who brought her young son, said she studied poetry and English at Rogers State University in Claremore, where she received her bachelor’s degree. She said she was the most comfortable when writing poetry about her Osage ways.

“Everybody gets to be themselves when they write,” Cosby said. “As Osages, we are our most liberated when we are creating art.”

The exercise set forth by Murray was for the attendees to pick one of Gray’s paintings in the room, and pick a color or a theme from the art. They could write about the title, an object, and once they had settled on an idea they were to write three sentences describing the work. It could be the beginning of a short story, a poem, or a descriptive expression.

Cheryl Potts, who lives in Pawhuska and manages the Million Dollar Inn, said that in her former career as a social worker she never had the time to write just for her, or had a chance to be creative because she was always writing legal descriptions and reports for her job. She said she was happy to be there and thanked Murray for providing the creative outlet.

Kathie Jacobs, from Bartlesville, said she wanted to spend an evening with her fellow Osages and express herself through writing. Miya McKim said she loved to write and wanted to spend more time doing that for her family as she plans to pass on her family’s Osage history to her children. Kayte Berrey Pratt said she knew Gina Gray well growing up in Denver, Colo., and that now that she is retired from nursing, she wants to take more time to write down her life’s experiences.

Mandy McKinley said she is inspired by her children and how they feel about art, especially her daughter Stellah who attends the first grade at the Osage Language Immersion School in Pawhuska. She is awed and inspired by Stellah’s use of the Osage Orthography in her artwork for school and at home. She said art is encouraged and praised at the school and she’s thankful for that.

Addie Roanhorse, Gray’s daughter, said she was thankful for all who came, to Murray and to the museum for hosting. “Being amidst my mom’s work is overwhelming,” she said. “She’s given me my talent and it’s going on to my daughter and I’m just really glad to be here.”

Murray said she met Gray a long time ago and they connected through art. “She taught me a lot and we laughed, and talked about our Osage ways,” she said. Murray said Gray prayed and researched to make her pieces. She cared a lot about teaching, sharing with other Osage artists. “Her good thoughts are here, among us, among her things.”

Murray ended with a video clip of Gray. With the volume turned up, the video began and Gray’s voice filled the quiet room. Many became emotional as the great artist talked about teaching children and teaching painting. The video ended as Gray began to laugh, putting a smile on everyone’s face.