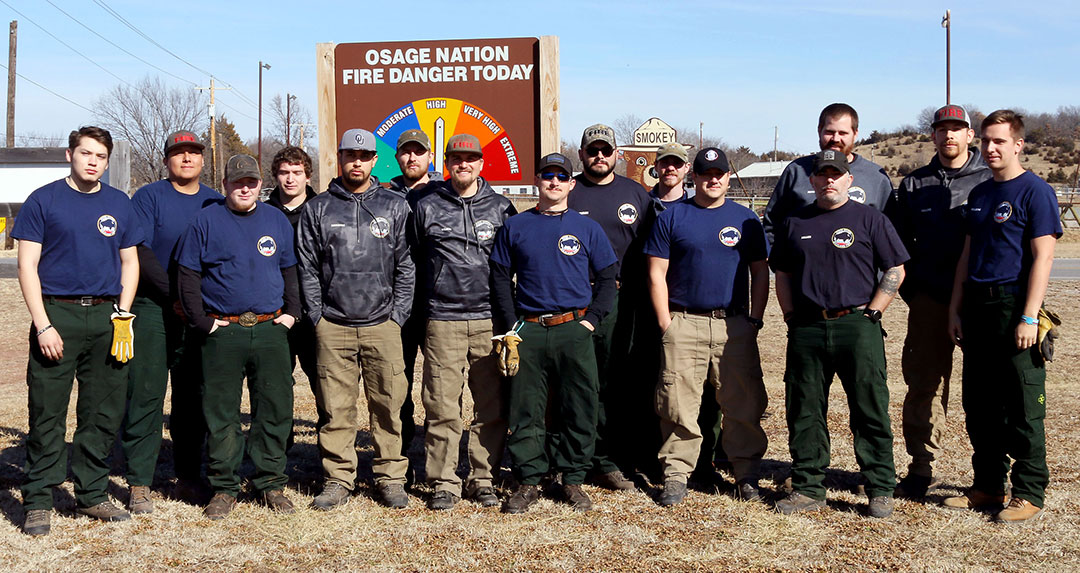 Ross Walker stood before about firefighters on the morning of Feb. 8. The firefighters hail from all over the country. Some are from the Croatan National Forest in New Bern, N.C., the Confederated Salish & Kootenai Tribes of the Flathead Reservation, and the Division of Fire in Ronan, Mont. He also had local emergency hires on site.

February and March can be a dangerous time for the Osage Nation Wildland Fire Management, which has been in existence since 2011. With six full-time firefighters, they enlist outside crews available to them through the Bureau of Indian Affairs and other federal agencies like the United States Forest Service.

“Don’t let that 20 percent chance of rain fool you, remember what happened last time?” he says, and the crews laugh. There was no rain on that day and there were fires, despite forecasts to the contrary.

As Walker read a detailed report of the day’s weather, the men and one woman were sectioned into teams to take on all of Osage County. The county, which is the largest in Oklahoma, is often compared to the state of Rhode Island. Walker said he is thankful for the help they receive from the visiting firefighters during the Nation’s fire season. He also has local emergency hires as well. The Nation is currently in a burn ban until March 2.

Walker explains that his fire team is funded by both the Osage Nation and the BIA. The outside firefighters are from the BIA and the USFS. He said they’ve worked with the guys from Croatan National Forest, and worked really, really well with them, for years. In fact, according to Croatan National Forest Firefighter Markeith Teel, the Osage Reservation is a home away from home. He’s been coming to the Osage for six to eight years.

“The hospitality, the culture, and the respectful ways displayed here make it one of our favorite places to come,” he said. “They take care of us while we’re here.”

Kelly Rose O’Bennick, a firefighter from the Confederated Salish and Kootenai Tribes on the Flathead Reservation, is on her second trip to Oklahoma, having been here in November and December. Her crew leaves on Feb. 22.

“I’ve been here a week. We’ve helped assist with the west and east Buford fires, helped put the fire underground,” she said. “We did some back burns as well.”

Walker said when the Nation’s fire season is approaching and they know they will need help, he contacts the BIA’s Eastern Oklahoma Regional Office. The regional office then contacts their dispatch center, AOICC. AOICC stands for Arkansas Oklahoma Interagency Coordinating Center.

Last year Walker, Corbin Malone, Fire Prevention Foreman, and Joseph Pratt traveled to Georgia and Florida to the Okefenoke National Wildlife Refuge. They were there for 21 days. He and others also went to the Rosebud Agency and the Pine Ridge Agency in South Dakota. Benny Miller, Britton Redeagle, Brad Hayman, Malone and other emergency hires went to Montana to the Flathead Agency and were there for almost a total of 45 days, he said. In previous years they’ve traveled to Arizona, Colorado, New Mexico, California, Washington, Minnesota, Tennessee, Idaho, and Oregon. “We’re a national asset,” he said.

Walker said the Nation’s fire season is about eight to nine months long.

“Historically, in Oklahoma we see about an eight, to possibly nine months, fire season. January through April, maybe a little into May. We experience what we call, ‘our late winter, spring season,’” he said. “We see most of our fires in March, and February is the second highest. Then we usually don’t pick up again until I’d say usually September through December.”

The crews normally work 8 to 10-hour shifts, and when conditions worsen they could easily work a 12 to 16-hour shift. But Walker said it’s a 2 to 1 work/rest ratio, so if a firefighter works a 16-hour day they are mandated to take off 8 hours the next day and rest. Luckily, it’s been slow for the past couple of days, but they just came off the east and west Buford fires near Skiatook.

“It was the worst fire we have worked on this year, absolutely,” he said.

There were two fires on Feb. 3. The east Buford fire which was a 6,830-acre fire that started at 2 p.m. About five minutes later, a mile to their west, the west Buford fire started. It ended up burning 1,622 acres. Walker and his crews worked on both fires until about 11 p.m.

“The next day we went out there to check those fires and it was another dry day and the west Buford fire got out on us, grew 222 acres and we contained that on the next day. On Feb. 5, we had the east Buford fire slop over and get out of its containment line and it only grew an additional 3 acres, but we were there, and we were checking it and we caught it rather quick,” he said. “But we’ll actually continue to check those fires and mop up those containment lines until they’re free of smoke or an escape or a threat to the containment line. So, it’s not just a one-day deal and we’re done with them – we continue to go back daily and check on them and make sure they’re still secured.”

As their morning briefing came to a close a crew member asked about Unmanned Aerial Vehicles, or drones, flying in the area because a local news station was flying a drone during a recent fire. Walker told the firefighters to shut down drone use immediately. Drones can damage helicopter engines and they can bring down aerial support.

“You’re going to get somebody killed in one of these seats,” said Malone, about allowing drone use during a fire. “You see a drone, shut it down.”

Walker ended the meeting but not before telling them: “Be safe. Be vigilant.”