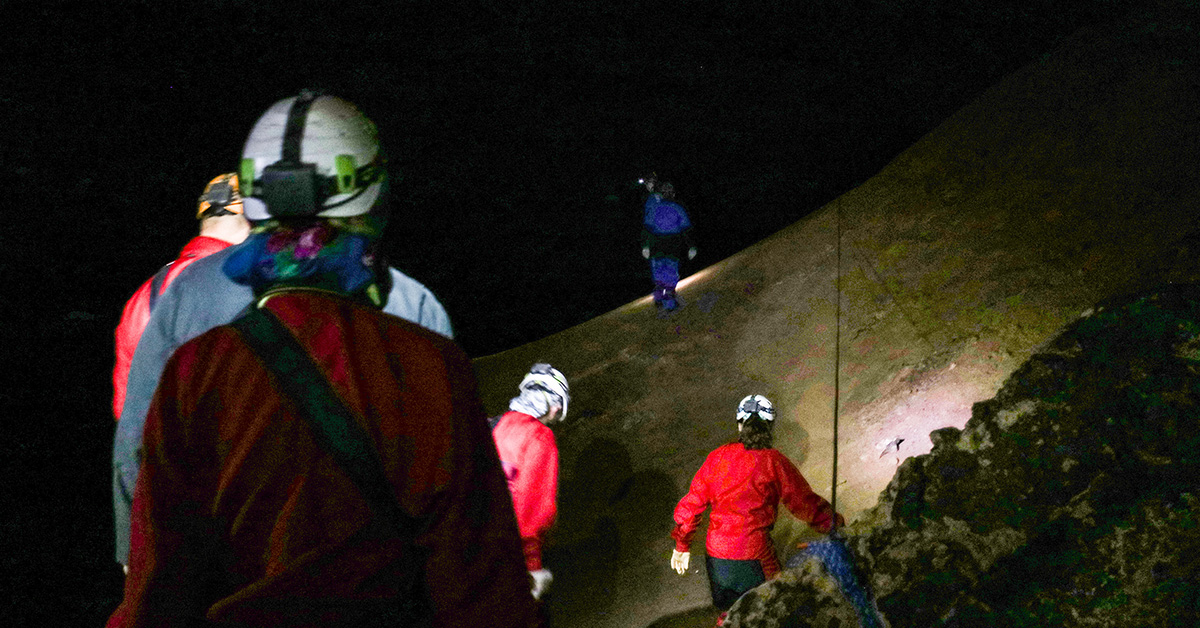 As one of the first stops on the 2019 Osage Heritage Sites Visit on Aug. 20, the Historic Preservation Office took more than 20 Osage citizens down into the caverns.

“This is a very sacred space you all are getting ready to go into,” said Dr. Andrea Hunter, the Nation’s Historic Preservation Officer. “For our ancestors, the caves and shelters were often times used as burial places. They were also places for our people to go and conduct spiritual rituals. The rock art that we will be seeing reflects that as well.”

According to John Riggs, “Deep Cave Archeology in the Arkansas Ozarks,” Blanchard Springs Caverns is a labyrinth of caverns under the Ozark mountains. It consists of various sized passages and many huge rooms extending almost 14 miles along three levels. It has been partially developed by the U.S. Forest Service and is the second-largest commercial cave in the country. Geologists have assessed the interior of the cave and have determined it has not changed structurally for at least 10,000 years, according to Riggs.

The majority of the Heritage Sites Visit participants went on the Dripstone Trail where they learned more about the caverns and its history of Native American usage dating back to around A.D. 980 +/-70 years, which would have been the Osage. Nine other participants went on the Wild Cave Tour, led by guides Meghan Foll and Trey Vaden, that is a four-hour strenuous hiking tour that explores the undeveloped middle section of the caverns.

According to Riggs, evidence suggests the spiritual significance of the Caverns to Native Americans because of bones found deep within the cavern. The cavern is only accessible by two entrances, one is a spring that no human could survive entrance without modern scuba gear and waterproof lights, and the second entrance is a 75-foot sinkhole.

The bones of the Native American man were arranged in such a way that would suggest the individual didn’t die there, but his bones were placed there. There were also cane torches laid out neatly in a row on a desk shaped rock that was waiting for future use. According to Riggs, many Native American cultures have caves in their creation stories and regarded them as sacred places.

“The individual that was discovered in the caves, we’re pretty sure it was one of our ancestors that was there,” Hunter said.

“[In June] we gave a sensitivity training to the Blanchard Springs Cavern staff because it was important for us to relay the sensitivity and importance of the caves to us,” Hunter said. “Because they’re giving tours to people and what it means – I have no idea what they’re telling people and I want them to relay this information in the Osage perspective as much as they can.”

During the Wild Cave Tour participants spoke to each other in the Osage language at times and many prayers were said along the way.

“I just want you all to know what it means to be in this place, with all of you and how good it feels to be down here,” said Kilan Jacobs, Historic Preservation staff. “I’m very thankful we got to come down here and experience this sacred place.”