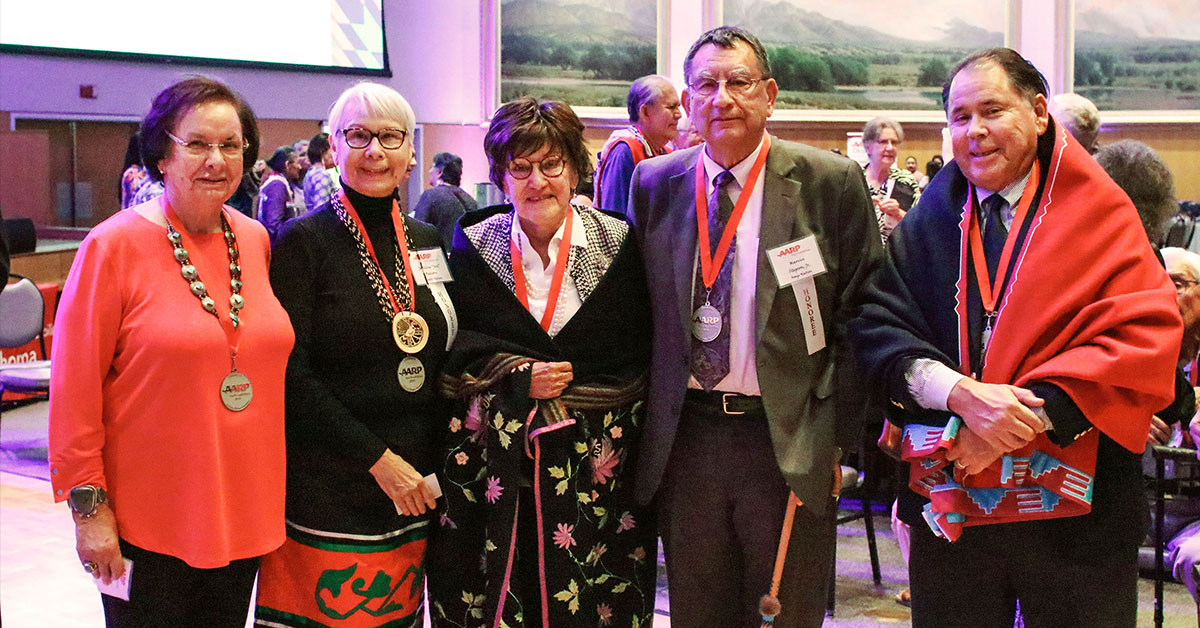 Five Osage elders were honored for their contributions to their communities at the 11th Annual AARP Oklahoma Indian Elder Honors.

Cherokee actor Wes Studi received the Dr. John Edwards Memorial Leadership Award. He accepted his award via a pre-taped video and gave his regrets for not being able to make it in person. He will also be the first Native American actor to receive an Oscar at the 11th annual Governors Awards on Oct. 27. The Dr. John Edwards Memorial Leadership Award honors an individual whose positive impact embodies the spirit of Dr. Edwards, who passed away in 2014, according to AARP Oklahoma.

State Director Sean Voskuhl said the Indian Elder Honors is the largest gathering of its kind in the state and, perhaps, in the nation. Voskuhl also noted that AARP Oklahoma continues to expand its work on issues affecting Native Americans, particularly working to address health disparities, transportation needs and cultural preservation.

Franklin McKinley, a U.S. Navy veteran, has worked tirelessly as a member of the Osage Veterans Memorial Commission. The purpose of the commission is to follow the Osage Nation tradition of honoring Osage veterans, providing a physical reminder for present and future generations of the contributions and sacrifices of Osage veterans and their families. As commission chairman, Mr. McKinley oversaw the completion of the memorial last year. The memorial features a 20-foot eagle feather situated upright like the eagle feathers worn by Osage men under the Inlonshka dance arbor. The memorial also includes recognition of each branch of the military with names of the Osage people who served in those branches. “Loss is just not on the battlefield alone, but back at home, as well,” McKinley said. “Memorials are a compassionate way of respectfully reminding all of the sacrifices that are made by our veterans.” McKinley has also served as a drum warmer for the Grayhorse Inlonshka dances for the last two decades. He has also served as a Whip Man for the Grayhorse Inlonshka.

Risë Supernaw Proctor has dedicated her life to maintaining and documenting the traditions of the Quapaw Tribe. She is well-known as a historian of Quapaw ancestry and has served as a researcher for 50 years. Her work documents Quapaw history, assisting families with ancestry and helping maintain Quapaw language preservation. Proctor worked in partnership with the Quapaw Library reproducing the many research documents, annuity rolls, census rolls, family trees, heirship rolls and funeral home documents collected through her research work. She also published a collection of late 1800s and early 1900s Quapaw tribal member photographs. Proctor worked as a hospital administrative assistant for 20 years until her retirement in 2003. In this role, she served as a patient advocate and helped families with their inquiries and concerns regarding the hospital. Proctor also founded the Heh Yah Sisterhood, an Osage women’s social group.

Ronald Blaine Shaw, MD, has dedicated his life to improving the health and well-being of all Osage Nation tribal members for more than 38 years. Dr. Shaw received his undergraduate degree from Dartmouth College, his medical degree from the University of Washington School of Medicine and his residency training at the University of Oklahoma Health Sciences Center. Dr. Shaw is from the Grayhorse District in Osage County and is actively involved in the tribe’s traditional ceremonies. He was elected to the Osage Congress in 2014 and was instrumental in the passage of many bills and laws that improved Osage Nation health programs, including the creation of the Wah-Zha-Zhi Health Center in Pawhuska. He stepped down from this role to assume his current role as chief executive officer/chief medical officer for the Wah-Zha-Zhi Health Center. Dr. Shaw has taken an active role in improving operations, patient satisfaction and facility improvements. He has also adopted a strong position to help young Indigenous students learn about career opportunities in health service. Dr. Shaw has also served on the Osage Nation’s Health Advisory/Authority boards and is a former Osage News health columnist. He also served as president of the Association of American Indian Physicians. Dr. Shaw is the former medical director for the Citizen Potawatomi, where he practiced internal medicine.

Marvin Stepson has led an authentic life of service in his commitment and dedication to the legal affairs of Indian Country. Judge Stepson attended law school in 1974 and received his Juris Doctorate from the University of New Mexico School of Law in 1977. He is also a U.S. Army veteran. During his 42-year career, Judge Stepson served in various capacities, including work for the Oklahoma Crime Commission. He also helped form the Oklahoma Indian Police Academy at Chilocco. Additionally, Judge Stepson worked as a prosecutor at the Court of Indian Offenses in Anadarko, as well as tax commissioner for both the Absentee Shawnee and Osage Nations. He also served as a Supreme Court justice for the Sac and Fox, Citizen Potawatomi and the Kickapoo Nations, and as a tribal judge for the Pawnee and Ponca Nations. Additionally, Judge Stepson worked for the Bureau of Indian Affairs executing probates across Indian Country. For the past 13 years, he has served as the Osage Nation’s first trial court judge, adjudicating matters both criminal and civil.

Cecelia Irene Tallchief has spent the majority of her life in service to American Indian people. Tallchief is a former two-term Osage National councilwoman, a position she was elected to in 1994. Tallchief is a strong proponent of ensuring quality Indian health care. She is a graduate of Pittsburgh State University and spent many years serving as a registered nurse. Her career took her all across America, and she was fortunate to work in many different tribal health facilities. Following her retirement from nursing, Tallchief turned her sights to helping the Osage people expand their health care services. She has served in various capacities to the Osage Nation’s Health Advisory Board for many years. Collectively, Tallchief has dedicated more than 26 years of service to the Osage Nation and its people. Tallchief is incredibly active in her Osage culture and heads her family’s camp every June within the Grayhorse District, located in Fairfax. Each year, she opens her camp to family, friends and visitors who frequent the Grayhorse Inlonshka ceremonial dances. Tallchief has also recently helped establish the Wak’on Owatsi for Osage women. This event seeks to honor the contributions of Osage women and the important role they play in their community. Tallchief is a model Osage mother, grandmother and great-grandmother who has spent her life advocating on behalf of her Osage and Indian people.

Past Osage Indian Elder honorees include: