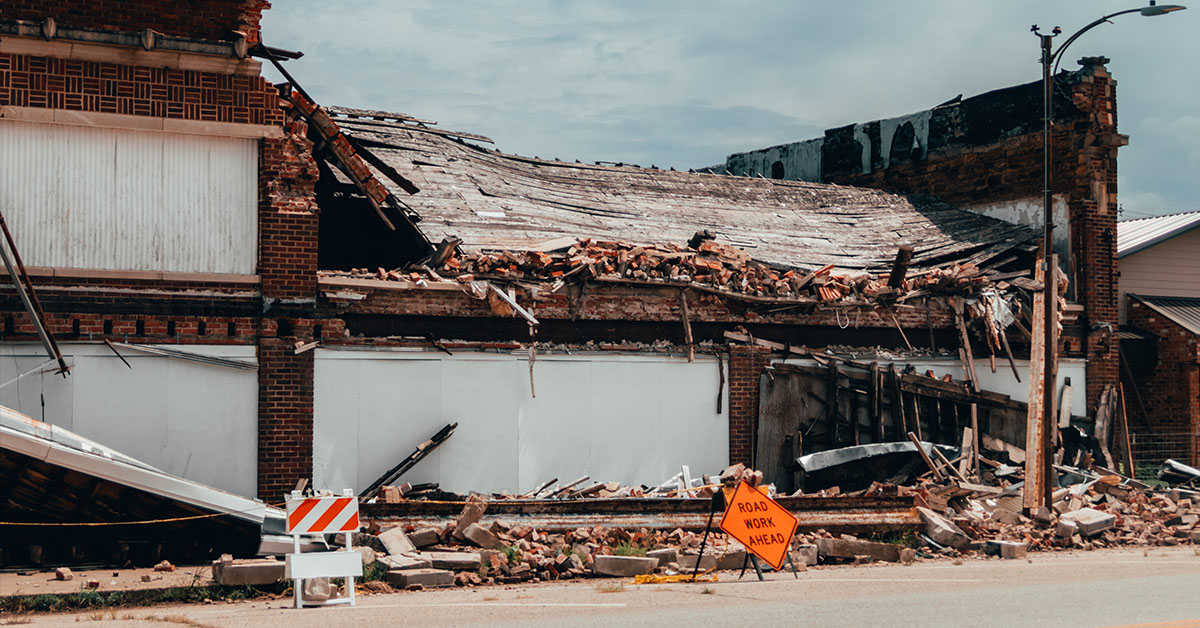 Future of Big Hill Trading Co. may depend on Osage Congress

Photo caption: The Big Hill Trading Co. was once the epicenter of the town of Fairfax. The building, built in 1913, was severely damaged by a tornado last year, followed by torrential rains. CODY HAMMER/Osage News

The iconic Osage Trading Co. building in downtown Fairfax has less than 30 days before Osage County Commissioners vote to demolish it.

Principal Chief Geoffrey Standing Bear and Dr. Joe Conner, an Osage citizen of Fairfax and a member of The Fairfax Community Foundation, appealed to the Congressional Commerce, Gaming, and Land Committee on Jan. 29. The Osage County Commissioners voted to table the question of demolition for 30 days at their Jan. 27 meeting, pending action by the Osage Nation.

“One of the questions I often receive is what is the Osage Nation doing to take advantage of the publicity and traffic to come from the Killers of the Flower Moon movie that we anticipate will make Fairfax a focus of where people want to visit?” he said. “And my answer is, outside of our Visitors Center and whatever our Museum wants to do, we are not doing anything to my knowledge.”

“Mr. Conner and other members of the Fairfax community are proposing a memorial to the murdered Osages to be there in place of an empty lot,” he said. Standing Bear said he would be willing to call a special session on the subject.

Congresswoman Alice Goodfox, committee chair, apologized to Conner before saying he had five minutes to make his proposal. The committee was nearing the two-hour mark for their meeting, having heard updates from the Osage Nation Ranch and the Osage Nation Energy Services LLC beforehand. Conner passed out the proposal to the committee members and said they could read it at their leisure.

According to the proposal, Beck Design of Oklahoma City provided an estimate of the costs associated with reconstruction of the collapsed roof framing, re-roofing the entire 17,000-square-foot structure, rebuilding and stabilizing the damaged façade, restoration of the remaining façade to historic appearance (the building was built in 1913), including new storefront and windows. The estimate did not include interior work. The cost was between $500,000 to $650,000.

Conner told the committee that a private citizen of Fairfax has pledged $200,000 toward the project if the rest of the money can be raised.

“A group of us have been working for some time to make sure that the old Big Hill Trading Company not be torn down,” he said.

He said they hoped to turn the iconic building into a memorial for the victims of the Reign of Terror, “particularly those in Fairfax but also including our relatives who were killed elsewhere on the reservation. I have ancestors who were killed here in Pawhuska.”

He said traffic has increased in Fairfax with “dozens and dozens” of visitors asking about the book, “Killers of the Flower Moon.” He said there are people walking downtown looking at the buildings and asking convenient store clerks what they know about the Osage murders.

According to the proposal by the Fairfax Community Foundation, the memorial would also include history and exhibits on the story of Alex Tall Chief who built the Tall Chief Theatre, America’s first Prima Ballerina Maria Tallchief, the courage of the first FBI undercover agents who exposed the murder conspiracy, the chronicles of the murders including work by Osage authors Dennis McAuliffe Jr., and the late Charles Red Corn. The book “Killers of the Flower Moon” by author David Grann and the upcoming film of the same name. He envisioned a welcome and visitors center with amenities like a restaurant, gift shop and bookstore.

Goodfox allowed for one question before she adjourned the meeting. Congresswoman Maria Whitehorn asked who owned the building and Conner said the County owned it. The meeting was adjourned with no mention of a future meeting date to discuss the proposal.