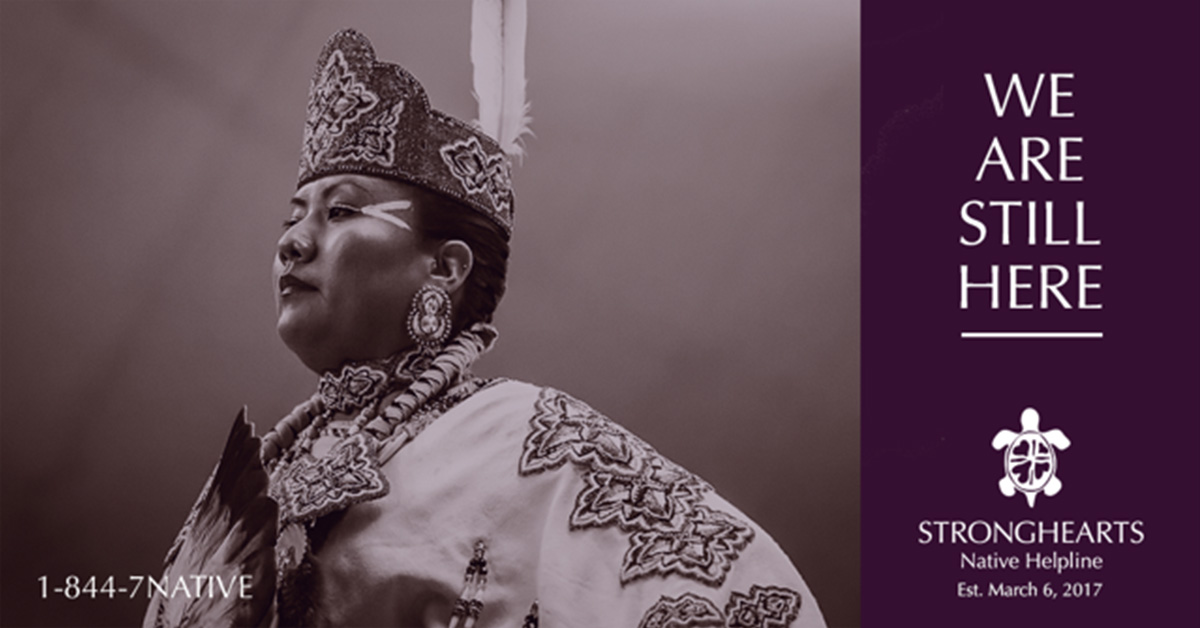 In October, Domestic Violence Awareness calls for an end to violence on Indigenous peoples

Every October during Domestic Violence Awareness Month (DVAM), advocates and communities across Indian Country and the United States rally together to honor survivors of domestic violence and support abuse prevention.

In 2020,StrongHearts Native Helpline once again calls on advocates, tribal leaders, reservation and urban Indian community members, service providers and Native organizations to support the movement to prevent and end domestic violence, which disproportionately affects millions of Natives every year.

Violence against Indigenous peoples began with European contact and has continued to this day, adding up to more than 500 years of abuse. Domestic violence, which continues as a tool of colonization, represents a lack of respect for Native peoples.

Native women and men in the United States experience domestic violence at alarming rates, with more than four in five Natives having experienced some form of violence in their lifetime and more than half experiencing physical violence by an intimate partner in the past year.

Domestic violence has many faces: physical, sexual, emotional, cultural, financial and digital. It doesn’t discriminate and includes violence against children, elders, LGBTQ2S individuals. There is also a strong connection between domestic violence and thousands ofMissing and Murdered Indigenous women.

Native nations in the Lower 48 and Alaska Native Villages continually go underfunded for life-saving domestic violence services. Now in its fourth year of operation, StrongHearts has received more than 9,103 phone calls and online chats requesting critically-needed support to deal with intimate partner violence. Of the phone calls, 5,010 were received in 2019 — a 396.04% increase from 2018.

This year during the Covid-19 pandemic, conversations focused on domestic violence have attracted international media and public attention. Alarming increases in domestic violence have been documented worldwide, due to victims and their abusers being trapped in close quarters while sheltering in place during quarantines. In August, in an effort to help Natives affected by all forms of violence during this uncertain and dangerous time, StrongHearts added sexual violence advocacy to its existing domestic and dating violence outreach services.

“We must continue to heighten public awareness of the issues of violence in Indian Country,” says StrongHearts Native Helpline Director Lori Jump (Sault Ste. Marie Tribe of Chippewa Indians). “StrongHearts Native Helpline urges all individuals not only during October but throughout the year to believe survivors, speak out and take action against abuse, and to share supportive resources with their loved ones and communities in a concentrated effort to put an end to domestic violence forever.”

StrongHearts Native Helpline is a safe, anonymous and confidential domestic, dating and sexual violence helpline that offers culturally-appropriate support and advocacy for American Indians and Alaska Natives. If you or someone you love is experiencing domestic, dating or sexual violence or if you have questions about your behavior, help is available. For one-on-one advocacy, click on the Chat Now icon at https://www.strongheartshelpline.org/ or call 1-844-7NATIVE (762-8483). Advocates are available daily from 7 a.m. to 10 p.m. CT.