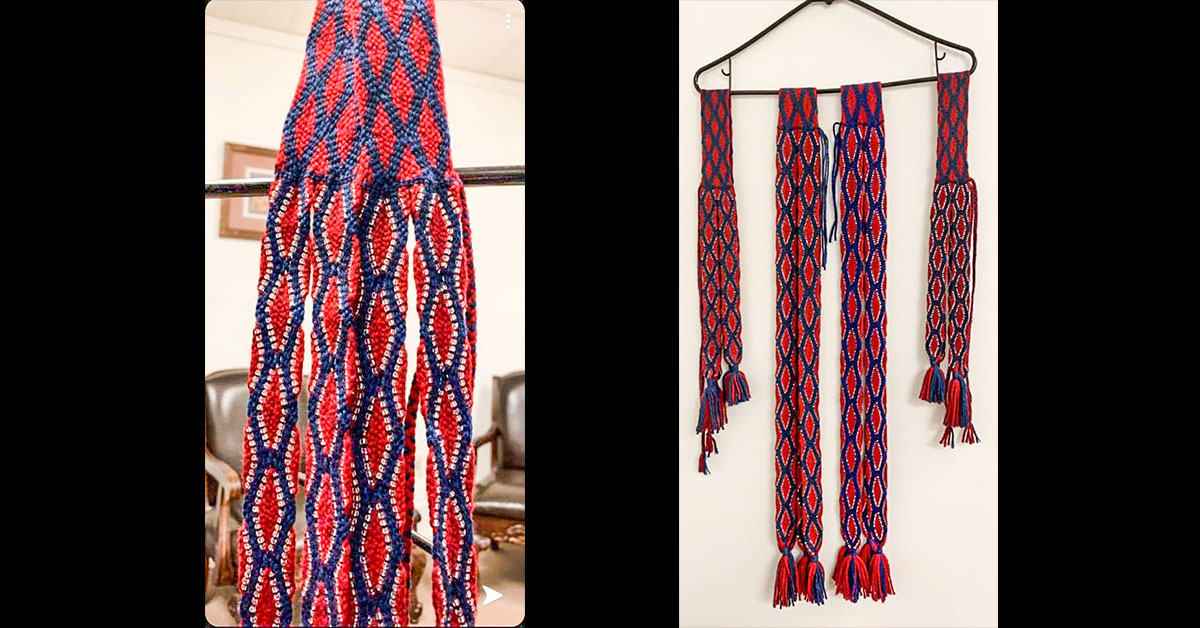 Photo caption: Men’s streamers are made from Osage yarnwork, a specific skill that requires a handwoven technique. Men’s streamers can range in price from $400 to $1,000, depending on the seller. Photos courtesy of Addie Hudgins

Addie Hudgins, her son and aunt were returning to Pawhuska from a much-needed vacation in July when she saw a man walking near her home holding a Pendleton box and other items.

Once he spotted them, he began to run. She quickly ran into her home to see if any items were missing. She called the Pawhuska Police Department and they quickly apprehended him. As he fled on foot he threw and stashed the items he had stolen from her along the way.

The police recovered two new serape Pendleton blankets, a Chief Joseph Pendleton blanket and other items. One item that was not in the collection was a pair of brand-new men’s streamers she had made for her brother. Osage men’s streamers are made of Osage yarnwork and they are not easy to come by. It’s a specific skill not many know and they are woven by hand. Hudgins had just finished the streamers two weeks prior to their theft.

She gave the police photos of the streamers. She also posted pictures of them on social media. Her post was shared widely. Many within the community began looking for them and she offered a $100 reward to anyone who found them.

“After some time passed, I pretty much had resigned they were gone,” she said. “It was just heartbreaking.”

Mays said it was an unfortunate incident that has happened before and will most likely happen again. He was not at his store when the streamers were sold to him. The store workers sent him a photo of the streamers and he gave his approval to buy them. One question they always ask sellers who are selling traditional clothing items, is if the items are new or used. He does not generally buy used traditional clothing because he knows they could be stolen.

“Families steal from families,” Mays said. “We try to buy from locals and keep the heritage going. We buy them and resell them. But, there’s always that one, it’s happened before, it comes in and it’s not theirs.”

He said he gave Hudgins two choices, either he could turn the streamers over to law enforcement and she would have to go to court, or she could pay him $300, which is what he paid for them. She chose to pay him $300. She said she just wanted them back.

Legally, pawnshops are not obligated to return items until they are ordered to do so by a court having jurisdiction, said ON Attorney General Clint Patterson. If the pawnshop is within the jurisdiction of the Osage Nation, the person could file a small claims action with the Osage Nation Trial Court against the pawnshop seeking the return of the goods or restitution, he said. But if the person is uncomfortable filing a small claim, they may want to consult an attorney.

“In no case would it be advisable for you to take the issue into your own hands by confronting the pawnshop owner and demanding the item be returned, or trying to retrieve the merchandise yourself,” Patterson said. “In a perfect world, you would be able to take the police report to the pawnshop and they would return your property and chalk it up to the cost of buying goods from unfamiliar or unacquainted sellers, but some pawnshops may be unwilling or unable to return your property; and know they are not under any legal obligation to do so until there is a court order.”

Mays took the streamers off the shelf after Hudgins called him, he said. He was selling them for $650. Together with family members, she pooled the $300 together and bought the streamers back.

“Honestly, I’m just glad I got them back. I ended up leaving, and we argued,” she said. “I talked to my brother and I’m happy they were found. I worked forever on them, but most weaving has white beads I did clear, just so they would be different.

“I don’t wish him (Mays) any ill will, it’s business, I get that, I understand that. But at the same time, he knows,” she said.

Hudgins was contacted by Osage Nation Congressman Eli Potts about the incident, but it was Congressman Billy Keene who sponsored a bill, ONCA 20-77, an act to amend the criminal code at Title 6 Crimes against Property to add Larceny and Receiving Stolen Property – Presumption. The bill was tabled during the Tzi-Zho Session in September and remains in the Governmental Operations committee. The proposed law would make it a crime to buy or receive stolen property without making reasonable inquiry into its origin. Keene said the proposed bill was not created from the incident with Hudgins and Osage Trading Company.

Patterson said if a person has property stolen the best course of action is to report the goods stolen to law enforcement; watch local resale inventory (Facebook groups, pawnshops, flea markets, etc.); report any suspect items to law enforcement; if safe and practicable, request to inspect the item; if the stolen item is found in a reseller’s possession, report it to law enforcement; and if law enforcement is unable or unwilling to seize the item, contact an attorney, he said.

“There is a process in place for property owners to recover their property; however, this is one of those situations in life where doing things the right way requires a great deal of effort, time, and money, to correct the bad actions of a few,” Patterson said. “If you or a family member had property stolen and would like to report it, please contact the Osage Nation Police Department at (918) 287-5510, the Office of the Attorney General at (918) 287-5514, or your local law enforcement agency.”