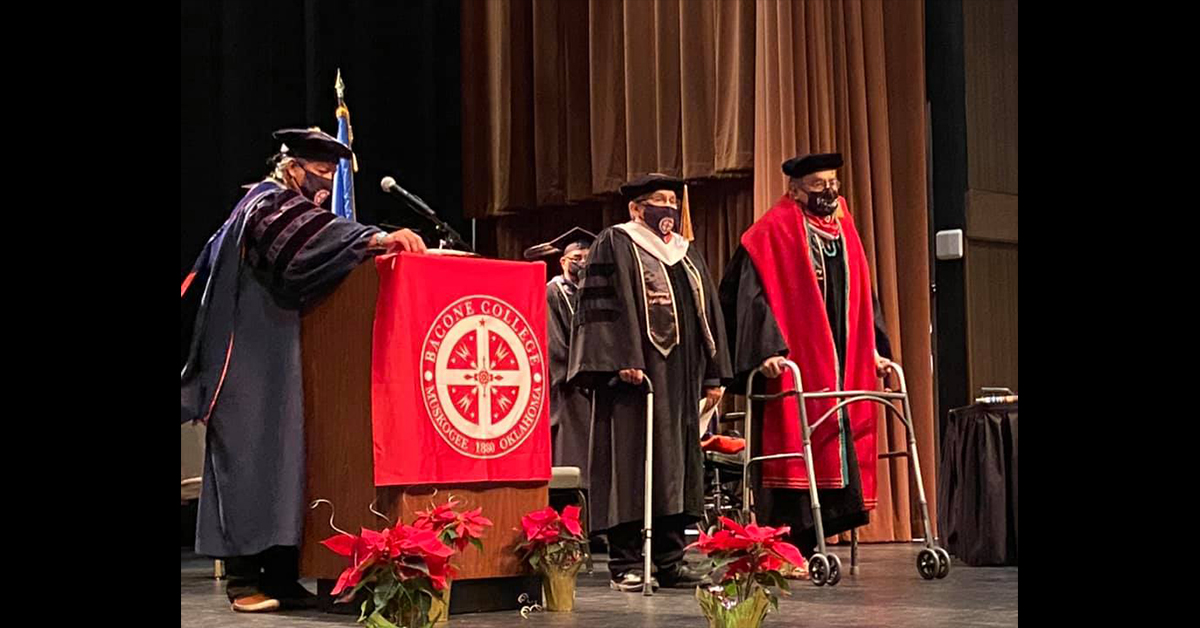 Due to the COVID-19 pandemic, the Muskogee-based historic Bacone College postponed its Spring 2020 commencement ceremony, which is when Simms was originally slated to receive his honorary degree. In rescheduling the ceremony, Bacone moved the event from Muskogee to the Skyline Event Center where arrangements were put in place to ensure COVID-19 precautions were followed.

Simms, a seasoned Bartlesville businessman, served a six-year term on the First ON Congress and was elected to the former Osage National Council in 1994 where he served as second speaker for the first two years and Speaker for the remaining four years of his term. Since 2014, Simms has served on the ON Gaming Enterprise Board and is the current chairman.

In a statement, Bacone College President Dr. Ferlin Clark (Navajo Nation) said: “Dr. Simms has contributed to the cultural, economic, and political well-being of his people and country. We are proud to recognize his lifetime achievements. His courage, resilience, and strong spirit are traits that embody the warrior spirit.”

Simms, who is Osage, Cherokee, and Muscogee (Creek), has a proven track record of building profitable businesses, according to Bacone’s statement. He is the son of Evelyn OnHand Pitts and is the grandson of Ralph OnHand (Wah-Tsa-Ah-Tah) of the Beaver Band. After his father died, Simms was raised by the late William Pitts, brother of former Chief Paul Pitts, as his own son and in the traditional ways of the Osage. Later being adopted into the Bear Clan and given his Osage name, Le-Ta-Xoh, by Mary Red Eagle.

In early 2020, Bacone announced the honorary degree for Simms, who said at the time Bacone is a place he remembers from childhood as a resident of the Murrow Indian Children’s Home, which remains located on the Bacone campus.

“When I was a kid at Murrow Indian Children’s Home, Bacone would have us come up and we’d pick up trash and sticks, clean up around the place for the maintenance man to mow,” Simms said in a Bacone statement. “When I left, I certainly never thought I’d ever be able to come back to receive an honorary doctorate. That’s why I’m honored.”

According to a previous Bacone news release, Simms served as a member of the President’s Business Commission during the administration of George W. Bush from 2001 to 2009. In 2003, he was selected as Businessman of the Year from Oklahoma by the Business Advisory Council. He has also served on the Oklahoma Pest Control Association, Bartlesville Chamber of Commerce, National Federation of Independent Businesses, American Indian Chamber of Commerce and the Pawhuska Chamber of Commerce.

Simms received his doctorate degree from Ferlin at the Tulsa ceremony and was also recognized at a dinner held the previous night where he was honored, blessed, and gifted, according to Bacone.

“We are thankful to the Osage Nation for allowing us the use of their outstanding facilities for the honoring dinner and graduation,” Clark said. “Because of the large venue and limited attendance that provided ample social distancing opportunities, and our ability to do temperature checks, provide masks and hand sanitizer, we were able to offer our graduates and honorees the recognition and experience they have earned.”

According to Bacone’s website, Native American students make up 59.3% of the student population and five Oklahoma Tribes charter Bacone College, which are the Osage Nation, United Keetoowah Band of Cherokee Indians of Oklahoma, Otoe-Missouria Tribe, Cheyenne & Arapaho Tribes, and the Kiowa Tribe.