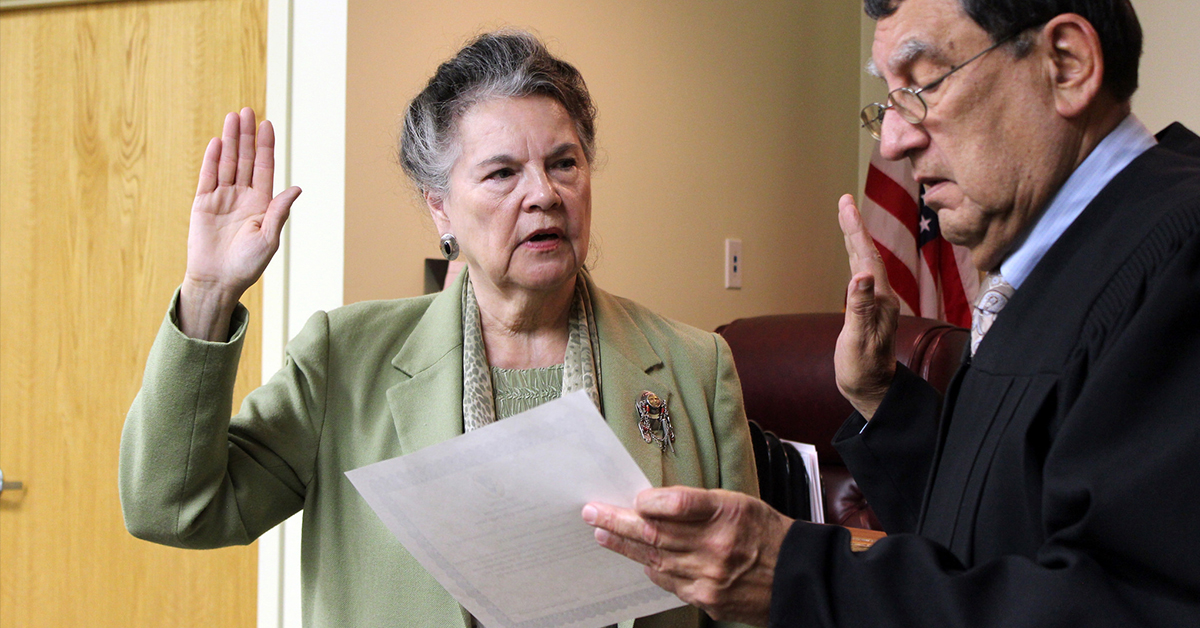 Photo caption: Kay Bills takes her oath of office in 2017 to serve on the Osage LLC board of directors. Bills is currently under investigation by the ON Attorney General’s office. Osage News File Photo

The Osage Nation Attorney General has dismissed an ethics complaint filed against former Osage LLC Board Chairwoman Kay Bills alleging wrongdoing in business decisions made during her tenure.

On March 9, AG Clint Patterson notified current Osage LLC Board Chairman Frank Freeman that his office is dismissing the complaint “as lacking a sufficient basis for prosecution.”

“Our office reviewed the Ethics Complaint and related statements you filed against former Osage LLC Board Chair Kay Bills,” Patterson wrote to Freeman. “Based upon the alleged actions taken by Kay Bills, the documents presented and ancillary research, we have determined there is insufficient basis to file an ethics case in the Trial Court of the Osage Nation.”

Patterson said his office’s determination is based on the following factors:

1)    Osage LLC had no by-laws, resolutions or policies in place limiting the Chair’s authority.

3)    Our investigation and the documents presented do not provide any proof of a violation of Osage Nation law.

Bills left the LLC Board in spring 2020 and Freeman was voted to serve as chairman that February. At issue in the complaint and allegations are decisions and contracts approved by Bills and a former Osage LLC employee regarding the broadband installation project. During the 2020 Hun-Kah Session, Freeman, told the Seventh ON Congress that the company had incurred about $300,000 in expenses that neither he nor the other board member, Rick Perrier, were aware of at the time.

Bills told the Osage News in July 2020 that she has her ethics that are challenged sometimes and “I don’t withdraw anything I did.” After receiving the AG’s decision letter, Bills said: “I knew the (broadband) project was going nowhere. I questioned the laying of 60 miles of fiber. These plans were years old. The contract allowed the contractor to do all the procurement and then supervise and sign off on the work. The agreement was vague and consisted of only a few paragraphs. Therefore, I hired an engineering company to review the plans and update them.”

In response to the AG letter, Freeman issued a March 30 statement on behalf of him and other board members Perrier and Danny Sadler: “Osage LLC is committed to operating in an ethical manner and by the laws of the Osage Nation. Let us be clear, Ms. Kay Bills violated the trust of the Osage LLC Board by making unilateral decisions and expending funds without board approval. In so doing, she harmed the integrity and the financial position of the company. As Board members, we take the same oath taken by the Chief and Assistant Chief, each member of Congress and any other official representing our Nation. That oath is to uphold the Osage Nation Constitution. By taking that oath, we are stating that we will abide by the laws and protocol of these positions. With this, we are to act with ethics, integrity and within the boundaries of the law.”

Bills added: “(The unnamed Native American-owned company she hired), with a successful background, reviewed the plans (she questioned). They came up with updated and realistic strategies that were thousands of dollars cheaper, updated the equipment list and did not require working with the (Department of Transportation) to get permits. Further, the environmental and cultural reviews were minimized. The new plan would require three significant towers and would have given excellent coverage to the region. Additionally, it would eliminate the dead zones for police and fire, cover the entire area, and would have been installed by last summer.”

Also regarding the AG decision, the LLC Board stated: “The Attorney General did not exonerate Kay Bills from these 11 ethical violations, which were filed against her by the Osage Board of Directors. He dropped them, stating that our by-laws did not address this situation. Ms. Bills instigated and instructed (former) CEO, Gina Gray (not a member of the Osage Gray Family), to sign several contracts without Board knowledge or approval … We are personally strengthening our own by-laws and will work with Congress and the Executive Branch to make sure these reoccurring issues do not continue.”