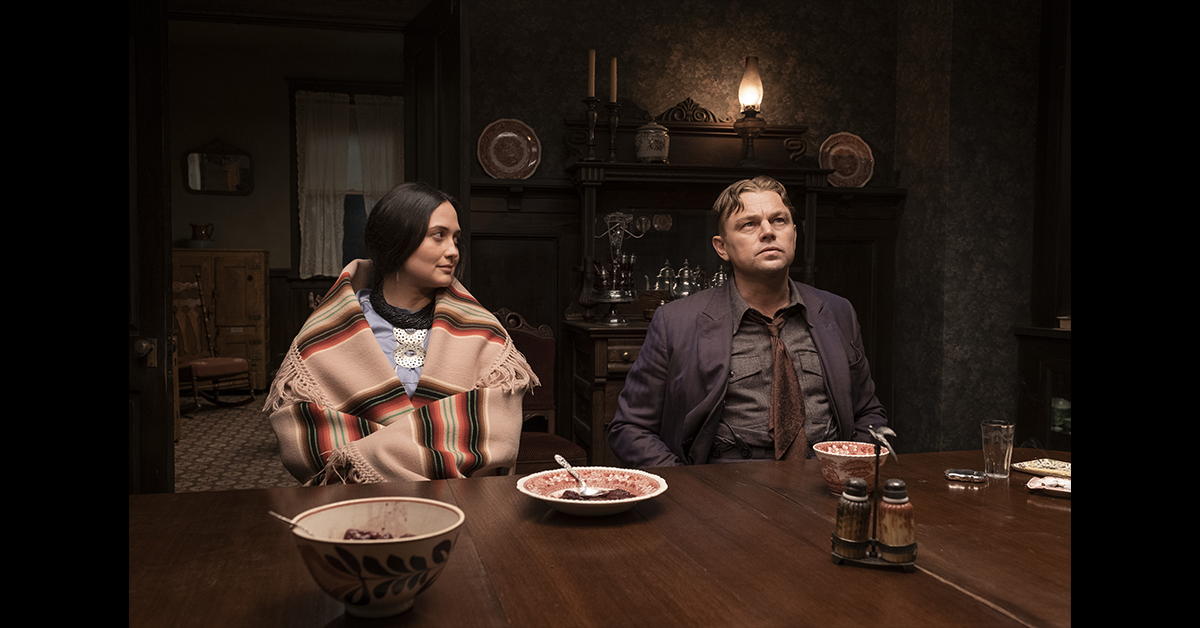 Photo caption: Leonardo DiCaprio and Lily Gladstone in a scene from Martin Scorsese's highly anticipated upcoming Apple Original Film, “Killers of the Flower Moon.” Gray Horse, Oklahoma 1919. DiCaprio plays Ernest Burkhart, and Gladstone appears as Mollie Burkhart, an Osage woman who falls in love with Ernest. Early in their relationship, Mollie invites him in for a meal and they form a bond. (Credit: Courtesy of Apple)

A meal. A gesture of kindness, a respectful and intimate way to welcome any guest to your home.

DiCaprio plays Ernest Burkhart, and Gladstone plays Mollie Burkhart, an Osage woman who falls in love with Ernest. The scene takes place in Grayhorse, Okla., in 1919 and is early in their relationship after Mollie invites him in for a meal and they form a bond, according to the release.

“Killers of the Flower Moon” is based on David Grann’s highly praised bestseller of the same name. Set in 1920s Oklahoma, the film depicts the serial murder of members of the oil-wealthy Osage Nation, a string of brutal crimes that came to be known as the Reign of Terror.

In the First Look photo, Gladstone is dressed in traditional Osage clothing. She is wrapped in a Pendleton blanket, she is wearing a black choker, two silver brooches, and her long black hair is loosely tied back. This is how she appears in the photos of her youth.

In the scene, she is looking adoringly at DiCaprio while he is looking off, perhaps a telling photo of their doomed relationship.

A bowl of grape dumplings sits on the table in red Spode China. Grape dumplings are still made to this day and Osages still use red and blue Spode dishes for their ceremonial dinners and special occasions. It’s considered the finest dishes to use by many Osage women, young and old. Judging from the meal, the dishes and the blanket Gladstone is wearing, this was most likely an important dinner.

In 1919, the Osages were still unaccustomed to the great wealth they were receiving from oil royalties and the oil boom that was happening around them. According to Grann’s book, Mollie was just 10 years old when oil was first discovered on the Osage reservation. The Spode dishes in the scene, the ornate wood furniture, the silver utensils and their nice home show that her family was receiving these oil royalties. This type of wealth would be coveted by Burkhart who moved to Oklahoma from Texas to work in the oil fields and was virtually penniless.

A native of Montana, Gladstone is of Blackfeet and Nez Perce descent. She made her film debut in Alex and Andrew Smith’s “Winter in the Blood,” and has recently appeared on Showtime’s “Billions,” as well as Kelly Reichert’s features “Certain Women” and “First Cow.”

Scorsese produces and directs “Killers of the Flower Moon” for Apple Studios from a screenplay by Eric Roth and Scorsese. Producing alongside Scorsese is Imperative Entertainment’s Dan Friedkin and Bradley Thomas, and Leonardo DiCaprio and Appian Way Productions.