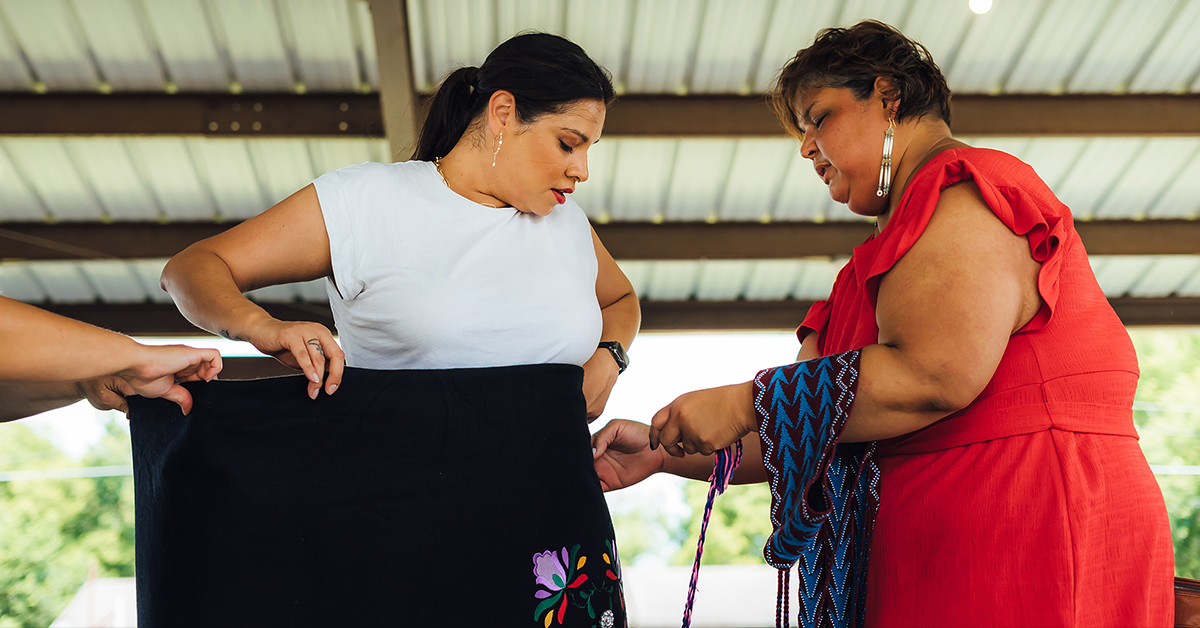 With a sweltering high of 98 degrees and a heat index of 108, Janese Sieke and her daughter Gianna, the Osage Nation Princess, dressed Myers in Osage clothes for both the afternoon dance and evening dance. Myers is enrolled in the Wichita Tribe and is also Kiowa. Janese and Gianna are from the Lasley Family, and they dressed Myers at the Grayhorse District camp.

“Yesterday was truly amazing!! I don’t have words to describe the kindness and generosity of Janese and Gigi! I love these ladies so much! Now I can say I was dressed by royalty!! 👑 @osageinsuburbia & @gigi.von.sieke,” wrote Myers on her Instagram page @cara.jade.myers.

“Thank you so much for inviting me and answering all of my questions! And for the dance lessons!! And thank you Frances for helping me out with my shawl!! You’re amazing! Of course a huge thank you to @a_few_goodfoxes & Tara Damron for making me look real keen with the most amazing butterfly pleat! 🦋 I appreciate you ladies so much!!!” she wrote. “Yesterday was so healing for me! Being in community, hearing the bells, feeling the drum & being surrounded by tradition, resilience, and friends/ family! ♥️♥️♥️

“Thank you with all my heart ♥️ I will remember this forever.”

Born in Phoenix, Arizona, Myers was raised in the small Arizona town of Prescott Valley and makes her home in Los Angeles. She has appeared on film and TV in “Rutherford Falls,” “Masters of Fear,” “This is Us,” “Hermione Granger & The Quarter Life Crisis” and “Ward of the State.” Myers attended both Grayhorse and Hominy Inlonshka dances, but this is the first time she has worn Osage clothes to dance.

Osage women’s clothing is not easy to come by as it is all handmade, nor is it easy to put on. Osage women wear yards of broadcloth for their skirt, and it is wrapped and pleated in a specific manner unique to Osage women. Grayhorse cooks Alyssa Goodfox and Tara Damron were on hand to help with her pleat.

"We wanted to honor Cara for all her hard work on the film ‘Killers of the Flower Moon,’ and for also being so kind and gracious to the Osage community. She's been present, open and generous to everyone she's met, and we wanted to honor her in this way," Sieke said. “She also came face-to-face with family survivors of Anna’s murderer.”

Myers is portraying Anna Brown, the older sister of the film’s heroine Mollie Burkhart. In 1921, the 36-year-old Brown was murdered by Kelsie Morrison and Bryan Burkhart. She was shot by Morrison and her body was later found in a ravine near Fairfax. In 1922, Morrison murdered an Osage man named William Stepson. His great-granddaughter is Alyssa Goodfox, the Grayhorse cook who helped Myers with her pleat. Lasley said when Goodfox told Myers that Morrison also murdered her great-grandfather, it was a significant moment for all of them.

“It was such a unique and amazing experience,” Sieke said. “She was just so grateful and loved being surrounded by Grayhorse women.”

As the dance began and the women began dancing, Myers could be seen dancing with various Osage friends she has made along the way. Often smiling and enjoying fellowship. One could almost imagine that Anna Brown would have done the same, if only she had lived.