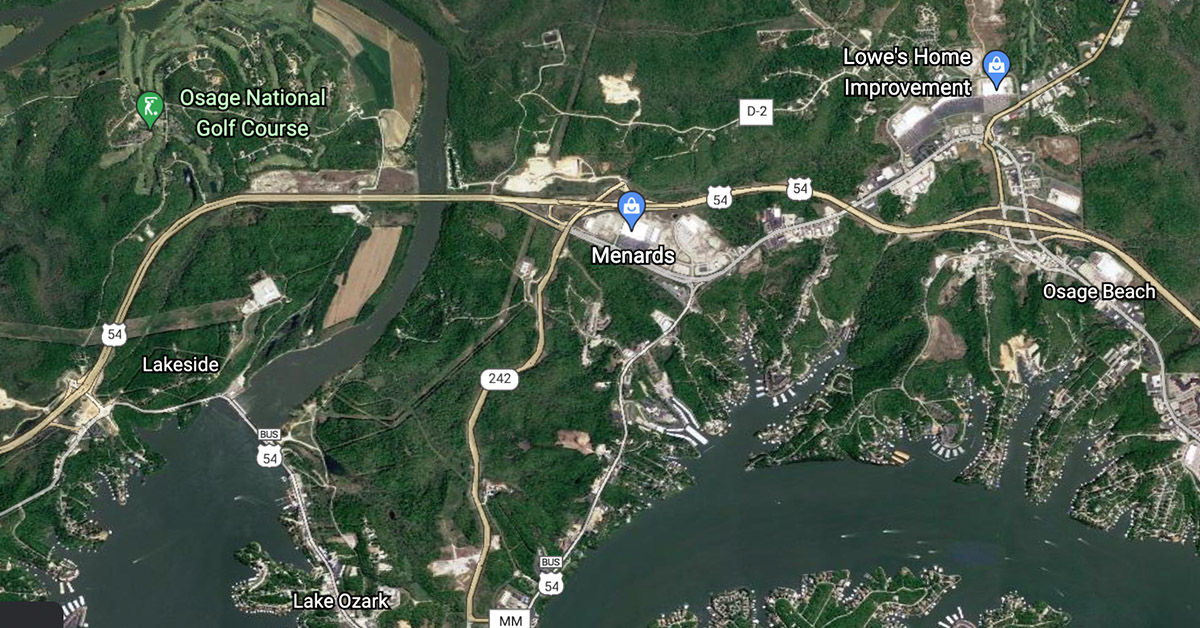 A screenshot of Google Earth shows the area near the city of Lake Ozark the Osage Nation purchased land. Osage News

Osage Nation has announced its plans for a casino and hotel in Missouri.

The Osage Nation bought 28 acres of land in June near the city of Lake Ozark in Miller County. The gaming establishment would be located along the shoreline of The Lake of the Ozarks off U.S. Highway 54, about an hour northeast of Springfield, Mo.

According to Osage Casinos CEO Byron Bighorse, the parcel has an existing “dilapidated” building and their plan is to raze the structure, clear the land and prepare it for construction.

“I would love to see a property the size of Tulsa [Osage Casinos] eventually, in a phased approach with a great hotel and convention space,” Bighorse said. “This place could use a cool entertainment arena like we did in Tulsa. With the lake being there, buy some property, build a killer slip area all the boats could tie into and have golf carts to take them to the Osage National Golf Course just down the road.”

According to an Oct. 29 Osage Nation press release, Principal Chief Geoffrey Standing Bear said the Nation will invest $60 million in multiple phases to the property that will feature a casino, restaurants, entertainment and more.

But not so fast. For a tribe to build a casino, the land must be in trust status with the federal government, and a gaming compact must be in place with the state of Missouri – either of which has not happened and could take years. Bighorse said they are working on it.

“We are in the process of putting in our application for the trust land,” Bighorse said. “It’s about a 12-month process. There is an environmental assessment that must be done. It’s going to be much like what we’ve done back home with our other casino properties. We’re hoping we can get the application submitted within the next 12 months.”

Even though the Nation owns the 28 acres, it is not yet trust land. They will have to file a land-into-trust application with the U.S. Department of Interior for the purposes of an off-reservation casino. It is very difficult for tribes to place a parcel of land into trust that isn’t within their reservation boundaries, but not impossible.

According to the article, “Off-Reservation Native American Gaming: An Examination of the Legal and Political Hurdles” by Heidi McNeil Staudenmaier, the Indian Gaming Regulatory Act of 1988 does allow tribes to conduct gaming on land acquired outside of their traditional reservations. However, the tribe must first pass a two-part test and gain the approval of the Secretary of the Interior.

First, the tribe must show that their off-reservation casino is in the “best interest of the Indian tribe and its members.” Benefits include tribal employment, job training, development, among others. Second, the tribe must show its gaming operations will “not be detrimental to the surrounding community.” This means the tribe’s casino cannot adversely affect a “community’s social structure, services, economic development, housing and community character.” And, after the Secretary of the Interior has closely scrutinized the tribe’s land-into-trust application and should approve the application for gaming purposes, the governor of the respective state can still veto any gaming efforts.

Currently, the states of California, Michigan, Wisconsin and Washington all have off-reservation casinos operating within their states.

On a positive note, Missouri is the ancestral home of the Osage. The Osage Nation Historic Preservation Office, led by Dr. Andrea Hunter, has conducted extensive archaeological work in Missouri over the past decade. The efforts by ONHPO in securing the Osage’s presence in Missouri has been cited by Standing Bear time and again.

Bighorse said if they should fail to secure trust status for the land, the pre-construction work on the 28 acres will triple the value of the land. “Either way, it will be an asset for the Nation,” he said.

"As they have done in similar projects, Osage Nation plans to give back to the surrounding communities through philanthropic contributions to local schools, law enforcement and other first responders, local charities and community improvement projects,” according to the ON release. “The Osage Nation is also committed to leveraging local vendors and local businesses whenever possible to provide products and services for the facilities.”

“The project will dramatically expand the Lake-area’s tourism footprint, generating jobs and economic opportunity, and serving as a new revenue engine for the local and state tax base,” according to the ON release. “On average, 90 percent of the workforce employed at similar facilities operated by Osage Nation are non-tribal members, creating new employment opportunities and growing tax revenue for the local community.”