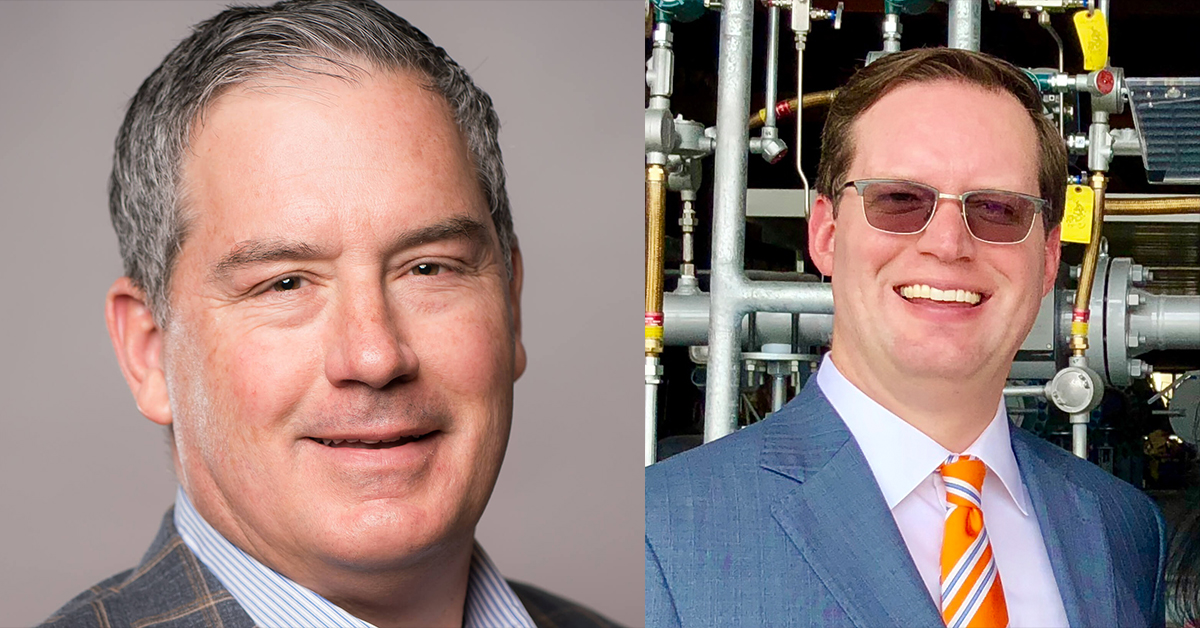 Mark Revard (left) is the new chairman of the Gaming Enterprise Board. Geoff Hager (right) is the new vice chairman. Osage News

New officer leadership roles are commencing for the Osage Nation Gaming Enterprise Board after the five members elected its officers on Oct. 29.

The officer election comes after the Seventh ON Congress voted to confirm Tulsa businessman Geoff Hager (Osage) to the gaming board during the 2021 Tzi-Zho Session. Hager, a Pawhuska native, received a unanimous Congressional confirmation vote after his appointment by Principal Chief Geoffrey Standing Bear.

The gaming board met in a special meeting that afternoon to elect its officers, who will serve a one-year term.

Outgoing board Chairman Mark Simms presided over the Oct. 29 meeting and officer elections. Simms called for nominees for the officer positions then asked for the roll call votes.

Board member Julie Malone (outgoing vice chair) nominated Revard for chairman with a second to the motion by Breeden. The vote was 4-1 with one “no” vote by Simms.

For vice chair, Breeden nominated Hager with a second by Revard. Hager received a 5-0 vote, including a vote from himself.

For the secretary-treasurer position, Malone nominated Breeden with a second from Hager. Breeden received a 5-0 vote, including a vote from herself. She also served in this same post in the 2021 fiscal year.

“The new officers will assume their roles at the next board meeting,” Simms said after the elections.

“The Gaming Enterprise Board has traditionally held their regular meetings on the third Wednesday of the month at 10 a.m. Does the board wish to continue with that schedule (in the current fiscal year) 2022?” Simms asked.

Revard said, “I think we should at least stick to it for now and then maybe at the next meeting we bring it up for further discussion ... And then have a more in-depth discussion around and have everyone really check their schedules.”

The board members agreed and Simms adjourned the special meeting.

Now confirmed for a three-year term, this is the first time Hager is serving on an ON board.

In 2014, Hager founded Big Elk Energy Systems and currently serves as its CEO. He is a Pawhuska High alum and Oklahoma State University graduate. Hager’s early professional work included being an applications engineer, technical sales and regional account management roles before entering the pipeline equipment manufacturing industry, according to his professional biography.

Big Elk Energy Systems focuses on drafting, engineering, systems design, piping layout and electrical and control systems. According to a 2018 Osage News article, Big Elk is named for Opahtunkah, the 19th century Claremore Band chief and Hager’s maternal great-great-great-grandfather. Hager said he got the idea to name the company for his ancestor while his family was together to mourn the death of his maternal grandmother, Cora Jean Big Elk Jech.

Revard first joined the Gaming Board in fall 2015 after his appointment by Standing Bear and was first confirmed by Congress during the 2016 Hun-Kah Session. He is an Executive Vice-President and the Oklahoma Market President for Gateway Mortgage Group LLC. Gateway is an Oklahoma-based national lender with a focus on Native American lending and loan servicing, according to his bio information.

According to the Gateway website, Revard joined the Gateway team in 2013 to help develop the mortgage division. He attended Oklahoma State University, where he graduated with a bachelor’s degree in business administration with a focus on marketing. Revard is also a former president/ co-owner of F&M Bank Mortgage Group before starting his Gateway tenure.