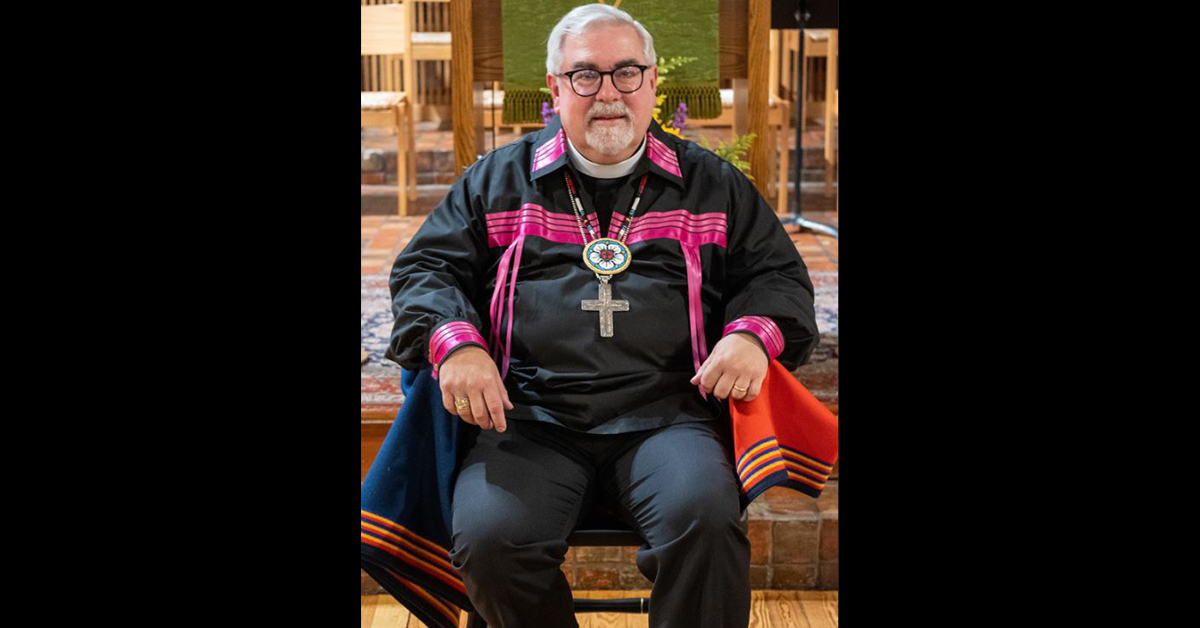 From the prairies of Pawhuska to the castles of Germany, Osage tribal member Rev. Guy Erwin teaches the importance of staying true to the heart as the first gay President of the United Lutheran Seminary and Ministerium.

Erwin recalls fond memories from his early years spent in Pawhuska and Bartlesville. He remembers Irby’s Drug Store, the Manhattan Cafe and running errands on his grandmother’s behalf to the Smoke House to let his grandfather know he better finish up his game of dominos and go home to grandma. He remembers the hot summers and the beating drums of the Osage dances, the cicadas humming loudly in the evenings and the old brick architecture. His family later moved around to Germany, Colorado and eventually back to Oklahoma, but Erwin explained how every time he returns, those beautiful memories flood back. It wasn’t until his college years that Erwin discovered the path he was meant to follow.

“My family wasn’t especially religious, but from a very early age I was fascinated by the idea of God, or whatever Great Spirit was out beyond us,” Erwin said. He further explained how he always felt particularly drawn to places of worship, especially during his time in Europe where he was surrounded by architecture and art. “I had never seen something so beautiful or mysterious,” he said.

Later, in college, Erwin sought to understand more about Christianity and its teachings through an in-depth study of the Bible. Eventually, Erwin joined the Lutheran church because he felt that the Lutherans had both a realistic understanding of what it meant to be human, and a very compassionate picture of a God who loves all— a compassion Erwin deeply sought.

Erwin described his coming out as gradual because growing up he had no idea that someone with his sexuality could have a normal life or career for that matter.

“I knew I would be giving up much of what I hoped to grow up to be, if people knew I was gay. So, I was quiet, I kept my head down, I worked, I learned and I did my best. I never lied about who I was, but I didn’t lead with it either,” he said.

It took a lot of baby steps, but over time Erwin felt more safe to open up and as he became more open, he met more people within the LGBTQ community which helped him feel safer and bolder. In fact, Erwin met his husband during their time at Yale and 27 years later they’re still happy. They’ve supported each other along the way and been the biggest advocates in each other’s lives, especially when it came to the church.

“I didn’t think about becoming a clergyperson at first, because I also knew I was gay, and though my church was very accepting, it hadn’t quite got to the point where it would welcome a gay pastor,” Erwin said. He started off as a professor of history and religion instead while gradually helping the church to become even more accepting.

“My role came to be to help the church understand how the gay people who already belonged to it were not some kind of outsiders trying to force change,” he said. “We’re people who were already with them, who loved God and the church as much as they did, and just wanted to be seen.”

Then, in 2009 the Lutheran Church lifted all the restrictions on ordination for the LGBTQ community, and shortly after that, Erwin became ordained.

This monumental step for the church spoke volumes to Erwin and those who felt torn between sexuality and religion.

“If we could all love God completely and without fear, we would not be concerned about what other people think, or how they live, and we could be happy with ourselves. But a lot of religious energy goes into policing other people’s lives and behavior, and I don’t really think God needs us to do that—at least not the God of our ancestors, who led us without forcing us to be any particular way. I think in Christianity we have Jesus showing us a God who is love—and that is all I need,” he said.

Now, Erwin leads as the President of United Lutheran Seminary and Ministerium of the Pennsylvania Chair and Professor of Reformation Studies in Philadelphia and Gettysburg. Looking back on his own story, Erwin acknowledged all the parts of his background and how they shaped him.

“Those of us who have made our lives off the Nation, and in a largely white world, still love who we are, and where we came from, and all our relatives back home,” he said. “Our future as a tribe is to be one of mixed blood, and deeply assimilated—we can’t roll that back—but we can ensure that our families and descendants still care about our amazing legacy, our great accomplishments, and the tragedies we have experienced as a tribe.” Because of that, Erwin is grateful for the connection to Osage Nation, to the LGBTQ community, and to the Lutheran Church which has all played an integral part in the person he’s become.