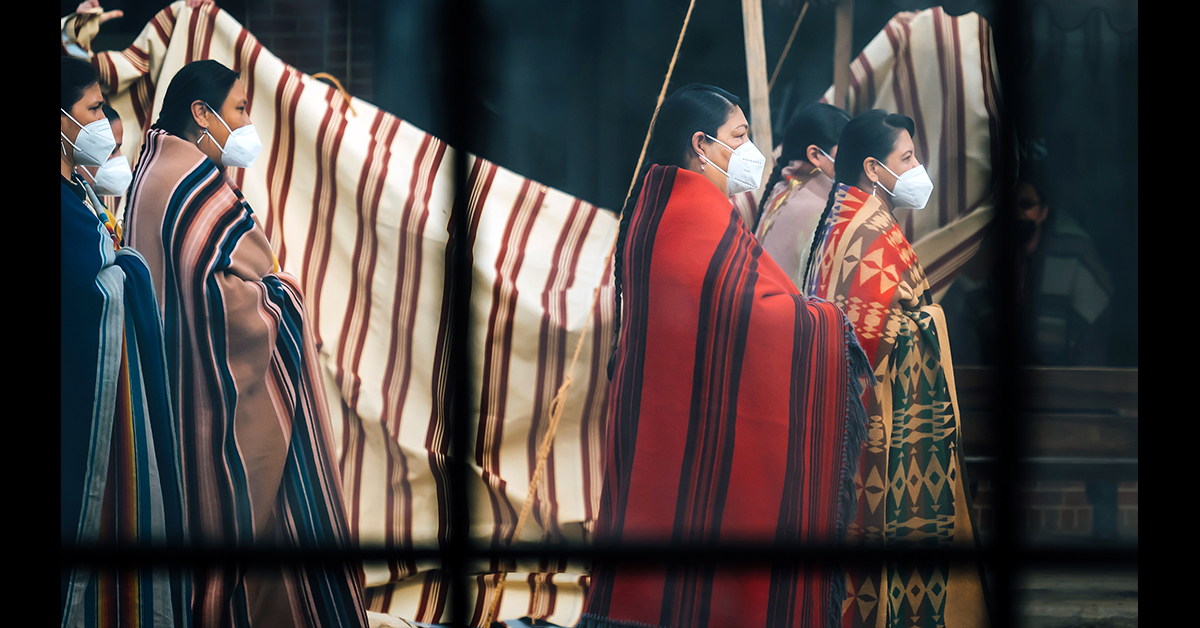 Osage Nation could see marketing shift in wake of KOTFM

Extras in the upcoming Martin Scorsese-directed film, "Killers of the Flower Moon," wear Pendleton blankets as they walk up and down Kihekah Street in downtown Pawhuska on July 12, 2021. CODY HAMMER/Osage News

It’s no secret a major motion picture was filmed on the Osage Reservation over the summer and brought major Hollywood stars to the streets of Pawhuska and Fairfax. But now that the movie has packed up and left, Osage citizens are asking how will the tribe capitalize on the intense interest from around the world after the film’s premiere?

Wes Morton, a Los Angeles-based Osage tribal member who is the founder and CEO of Creativ Strategies, a full-service marketing and consulting agency based in LA and New York, presented to the Osage Congressional Commerce, Gaming and Land Committee on Nov. 17 to offer his services.

“I just want to give you a sense of scale of this movie. I’m sure everyone is aware of the movie coming out and whether you have good or bad opinions on it, but the real opportunity here is this is going to be the world premiere of the Osage Nation,” he said.

The Apple Original film, “Killers of the Flower Moon,” is based on the bestselling book of the same name by author David Grann. The film, directed by Martin Scorsese, stars Leonardo DiCaprio, Robert De Niro, Lily Gladstone, Jesse Plemons, Tantoo Cardinal, John Lithgow, Brendan Fraser and many others. The film will most likely premiere in September or October of next year, according to a film source.

This is the first major film for Apple and with over a billion people owning Apple devices, those consumers will be able to stream the film instantly on their iPhone, Apple computer or Apple TV. “Folks will also be searching for information about the movie, before and after the premiere on Google search and YouTube,” Morton said. This will lead them to the Osage Nation.

He provided research analysis his firm compiled for the committee, based on numbers from the performance of Scorsese’s last film, “The Irishman.”

“When we were looking at The Irishman’s release for context, it was interesting to see the different bursts of interest around the theater premiere and then the digital premiere. Then we saw an uplift in interest thereafter,” he said. “So that one million worth of searches we noted on the last slide, searching for the Osage Nation currently, will most likely have a natural sustained lift after this movie is released.”

He said the goal is to promote the Osage Nation and funnel the flood of people interested in the tribe to avenues to help fundraise for different causes and promote its business interests. “This is a marketing campaign by the Osage, for the Osage.”

Congresswoman Pam Shaw, who is a former Marketing Director for Osage Casinos and other gaming enterprises, said the campaign is not to highlight the film but to highlight the Osage Nation and its successes. Much like the brand and image campaigns of the Choctaw, Chickasaw and Cherokee Nations.

The Chickasaw Nation has a Division of Commerce Marketing Department and works with the marketing company Ackerman McQueen, who is also the producer of Chickasaw.tv. The Cherokee Nation works with multiple firms for its casinos, businesses, social media, website and brand management.

Osage Casinos works with Resolute PR and Ideaship Studios, among others. However, that’s for the casinos and not the tribe. In May, Principal Chief Geoffrey Standing Bear hired seasoned communications specialist Abigail Mashunkashey to oversee the Nation’s Communications Department. She and her staff handle the press releases for Standing Bear and the Nation, its social media and brand management. The Nation’s I.T. Department manages the website, but longtime director Robert M. Kirk recently resigned.

Congresswoman Paula Stabler, who handled tourism for the Jim Gray administration, said the expansion to the Osage Nation Museum needs to happen within the year so the many visitors coming to the reservation will have somewhere to go. She said the tourists coming to the area will benefit the entire community.

“One thing we have to remember is the movie is an investment into our story, but the tribe isn’t the one making the profits. We got some lease monies and things like that, but this is a campaign about our people and our stories,” she said.

Morton’s proposed budget was $550,000 per year but he later said that price is negotiable. Stabler said that’s a hefty price tag for the Nation. Congresswoman Jodie Revard said the Executive Branch has not submitted a comprehensive strategy yet for economic development or tourism, but she liked Morton’s presentation. She said he gave her many things to think about.

“There is just such a huge opportunity. Apple is basically spending $300 million to promote our tribe for us via this movie, so I think it’s imperative that we’re there, in some sort of fashion,” Morton said. “What I don’t want to happen is someone writes about us, which will happen, but I think we just need to show up to the conversation next year.”