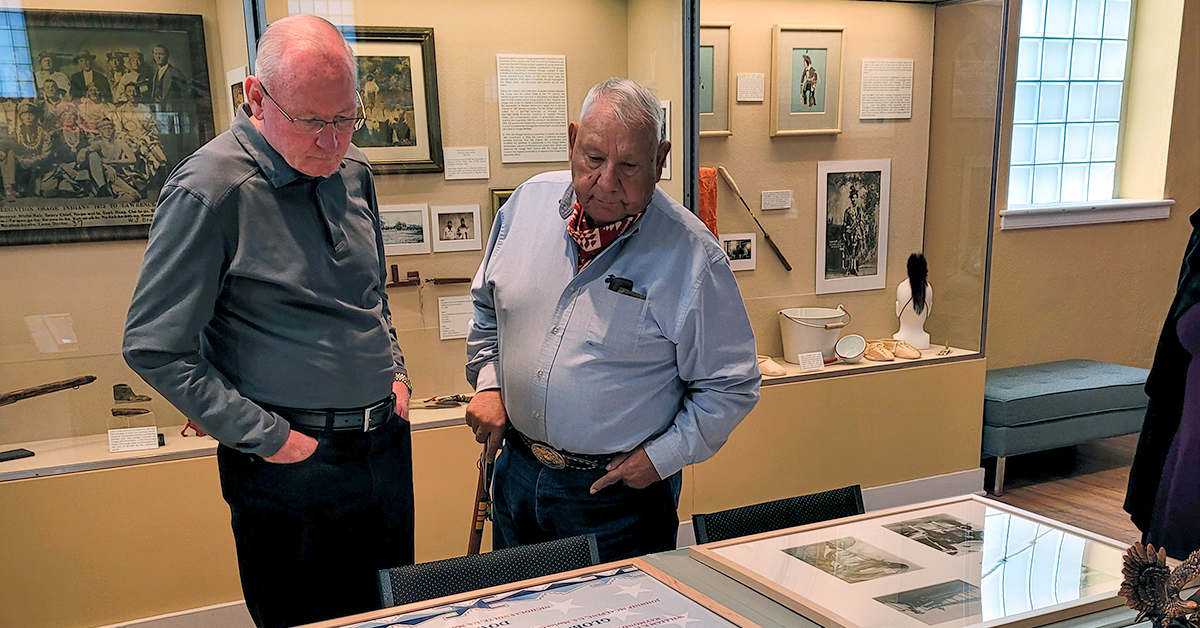 With the 2021 holiday season underway, the annual Marine Toys for Tots program is launching nationwide again to ensure children in need have a gift for Christmas.

Efforts are also underway for the Toys for Tots campaign to once again reach northeastern Oklahoma, including less fortunate children on the Osage Reservation. On Nov. 6, the Osage Detachment #669 of the Marine Corps League hosted a Pawhuska visit for Marine Lt. Gen. (Ret.) James B. Laster who is now President/ CEO for the Toys for Tots Foundation.

Local Marine veterans who are part of the MCL Osage Detachment met with Laster as he visited Pawhuska and requested to visit the Osage Nation Museum. John Henry Mashunkashey, MCL Osage Detachment Commandant, escorted Laster and a group of fellow veterans to the museum on the ON campus where they viewed the current Voices of the Drum exhibit and Osage-related military veteran items on display.

The group met with ONM Director Marla Redcorn-Miller who gave a tour presentation to the group and discussed the exhibit items. Also at the detachment’s request, ON Congresswoman Paula Stabler attended and delivered a history presentation on the Osage people and the Nation.

Laster, a 39-year veteran who served in Afghanistan and the Persian Gulf, assumed the national Toys for Tots Foundation leadership role on Jan. 1, 2020, according to a Pittsburgh Post-Gazette story. His new post came just months before the COVID-19 pandemic spread, impacting everyday life on a global scale. This year, Laster said the Toys for Tots will continue and more efforts will be made to reach Native American children residing in reservation communities.

In past years, the MCL Osage Detachment has assisted with Toys for Tots efforts at the Broken Arrow-based Marine unit and then obtained toys to distribute in Osage County to children in need.

At the museum, Redcorn-Miller shared brief descriptions of the Osage artist-designed hand drums and Mashunkashey showed the American Legion Post Women’s Auxiliary drum that is also part of the display. “As you can see, it’s pretty old, it was made in the 1960s. It’s not just an instrument, but we treat (drums) like persons, so I told Marla we need to display it and keep it where people can see it and they’ll see what it is and what it meant to our people. The Post 198 drum, I gave it to this museum to care for (out of storage areas) and being raised culturally, it means a lot to us to be able to see these drums and the artwork that these men and women put into the making of them,” Mashunkashey said.

Stabler shared historical highlights of the Osage including the people’s prior homeland in earlier periods, including being a part of the Cahokia civilization, before coming to present-day Oklahoma. “We were one of the tribes that actually purchased our land, which at that time existed for the Cherokees, so we paid cash for it – about a million and a half acres – and in 1870, we started moving down here. By the time we got here, we had lost 95% of our people ... Once we got here, we found out all that rock was limestone and under that limestone was oil, so that’s what started the progression of the Osages becoming the richest people in the world,” Stabler said of the timeline.

“I think of how we had to adapt to Western Civilization and at the same time remain Osage in our hearts and so we were restricted from so many things, our children were sent off to (boarding school). I often ask if you have grandparents when they were five years old, were they put on a train and sent off to school? And how that had to feel for our people and so many of us in my generation don’t know a lot about that because our grandparents refused to talk about it ... It was a hard time and yet our grandparents were still trying to live like Osages. My family was a part of history as all the families were around here,” Stabler said.

Stabler also discussed families’ research that described money-related events occurring as a result of the Osage wealth from oil. “The onslaught of the conspiracies that went on about money, we’ve sat and looked at records where an Osage would have a guardian – and you paid for the life of that guardian – and you take the car and get it serviced and an oil change on an Osage’s car might be $600 back in the 1930s, but for the guardian, it was $6. These were not hidden records, these were not things that were somewhere in a back room, they were actually in the open. I’ve read documents where the first line of an investigation is ‘The Osages have too much money, therefore my investigation has proven that we need to tax them.’ So, in that era, we had so many Osages that lost their homes because they were not a taxed people and yet they were guilty of not paying their taxes... And so many homes were built without Osages even knowing their money was building a home. The grandfather I grew up with was Wakon Iron and his money built the Duncan Hotel, never knew it until he was taxed and told he was losing it. These are the kind of atrocities that went on – on top of the physical pain was also the emotional and mental pain and the fear that went on,” she said.

Regarding present-day Oklahoma statehood, Stabler shared: “From the 1880s, (statehood supporters) are held up to make it a state by the Osage people because the one hindrance they had was the Osage Reservation was bought by the Osages and they wanted to turn it into state land. And so, James Bigheart – our Principal Chief at the time – held it up for 20 years and in the end, the negotiations (result in) we have to concede to certain items. We conceded the land to become individual allotments ... By then we had recorded on our membership 2,229 slots, not all of them were Osages, not all of them were people, but they were supposedly 2,229 people and they were divided up and each given a headright, shares of the oil, and they were also given 160 acres and that’s how the State of Oklahoma became a state. And of course, those documents weren’t supposed to last more than 25 years. At that time, it would’ve dissolved and that’s what the Western movement wanted so they could acquire the land because of the oil reserves that were here. But after about 75 years, it was finally put into perpetuity and so it will remain as it is. The individual land holdings, however, did change hands and it wasn’t 15 years ago the Osage people really only still own about a quarter of the land surface.”

“Today, we do have over 23,000 Osages, we have over $100 million in the education of our children and that’s something to be proud of ... In the late 1900s and into early 2000s, we started that movement (toward present reformed government) and we were able to ask (the U.S. Congress) for a public law, which we got, when George Bush was President and (he) signed that law and we were allowed to create our own Constitution, which we adopted in 2006 ... We have a three-branch system (legislative judicial and executive), we write our own laws, and we are able to function as a new society with the complexity of a traditional culture and we’re still working our way through that one,” Stabler said.

For more information on the Marine Toys for Tots program, including ways to donate toys or money and to locate local campaigns nationwide, visit its website at www.toysfortots.org