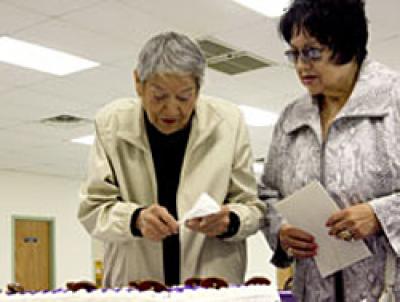 A memorial to a local 1927 pro football team, the Hominy Indians, may soon stand as a permanent reminder of how the all-Native American team beat the New York Giants—if enough money can be raised to build it.

Osage Nation Chief Jim Gray said that the tribe has been talking with the National Football League about a permanent monument for the famed Native team.

“In recent years we’ve had a resurgence of Osage culture,” Gray said. “One thing that is our cultural history is the Hominy Indians football team.”

In meetings held over the past year in the three Osage County districts, tribal members submitted ideas for projects that could be financed through the Nation's new non-profit foundation, including the football memorial, Gray said. The Osage Foundation Board, formed by the Osage 31st Tribal Council, has since been reformed and allows for tax-exempt donations.

The brainchild of Ira Hamilton, Osage, the Hominy Indians team was a group of young Indian athletes from all over Indian Country. Mostly made up of players that played for the Haskell Institute, now known as Haskell Indian Nation’s University in Lawrence, Kans., the team’s home base was in Hominy. Many Osages played on the team, which was formed in 1923.

The Indians shot to fame after never being beaten--or tied with--even though they had played in football games all over the country, especially the East Coast. The National Football Champions that year, the New York Giants, traveled to Pawhuska the day after Christmas to play the famous Indians, three weeks after winning their national title against the New York Rangers, according to an article by Arthur Shoemaker in 1992. After a grueling game in front of reportedly 2,000 fans, the Hominy Indians beat the Giants 13-6.

Urban legends still abound on the Osage reservation about the Hominy Indians team. Eye-witness accounts passed from one Osage to another said player John Levi could drop-kick the football, which was round and heavier than today’s football, from the 50-yard line through the goal posts back and forth and pass the ball 100 yards. Another player, Johnnie “Pepper” Martin, went on to play baseball for the St. Louis Cardinals and it’s rumored that Jim Thorpe, voted one of the best athletes in American history, played on the team for a couple of years.

The opening of a Hominy Indians exhibit at the Wahzhazhi Cultural Center on April 13 drew many descendants of the players. Ira Hamilton’s descendants brought their families, as well as George Kipp’s descendants. Kipp was a full-blooded Blackfeet Indian from Browning, Mont.

Virginia Maker, daughter of Indians player Arlen “Buck” Harding, said her mother and father met while he was on the team and her mother always looked forward to watching her father play. She said that they had her father’s Indians uniform for a long time but have since lost it. Maker was excited by the news of a possible Hominy Indians memorial.

“I would really like to see [a Hominy Indians memorial] built,” Maker, 79, said. “But, I want to make sure it’s built in Hominy.”