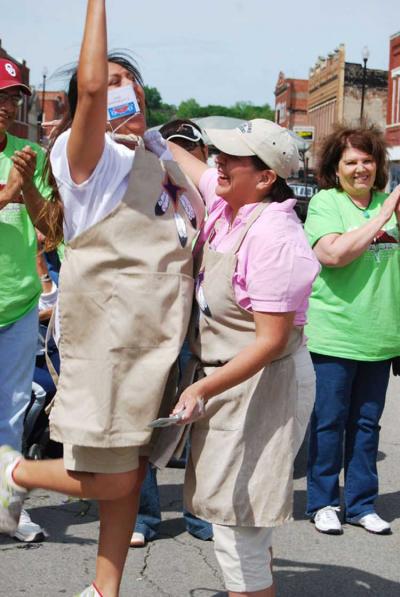 Ramona Horsechief and her sister Lisa Pahsetopah say having strong faith and “a love for cooking” creates great dishes and keeps people coming back for more, especially when it comes to Indian tacos.

"Cooking is my spiritual gift,” said Horsechief. “That’s why my husband is so heavy.”

Horsechief, along with Pahsetopah, took home top honors Saturday at the National Indian Taco Championships in Pawhuska, where more than 800 people descended downtown to taste the culinary treats.

Horsechief, who won first in the Traditional Indian Taco category, won after she covered her frybread in buffalo meat chili and added the garnishment of lettuce, cheese and homemade pico de gallo.

Pahsetopah, who won in the Dessert Indian Taco category, actually filled her frybread dough with cream and then cooked it in the hot grease, topping it after with caramelized pecans, fresh strawberries and homemade whipped cream. She said she chose the recipe while saying to herself “I know Indians love sugar, sugar, sugar.”

The duo was among 20-plus entrants in the competition, now in its fifth year.

The sisters, both of Pawnee and Cherokee decent, are devout Christians who travel for ministry work. They recently started their own catering business, Two Sisters Catering, to help bring in more money after their other work started slowing down.

“I love cooking it all,” Horsechief said while taking down the food stand she ran with Pahsetopah and her husband Ellis Horsechief .

“It feels unbelieveable,” Pahsetopah, of Sapulpa, Okla., said after the winners and runner-ups were announced. Both accepted their checks from the event officials with flour and dough sticking to their hands.

The sisters' first place award came with a $1,500 check and a year’s worth of bragging rights.

Osage Nation Principal Chief Jim Gray congratulated the sisters on their win and shook their doughy hands. “It’s going to be a long year,” he said jokingly, referring to the Osage and Pawnee rivalry that stems back to pre-1900 Indian wars.

Horsechief, 41, said she credits working well with Pahsetopah, 46, which is another reason they joined forces in business. “She makes the best frybread and I make the best chili,” she said.

The Horsechiefs, of Midwest City, Okla., travel with One Spirit Praise, a Native American Christian music ministry, and visit with people from all backgrounds. Ramona provides food for the events. Horsechief, who has more than 20 years of cooking and culinary school experience, said her group visits with all groups of people, including those attending rehabilitation and juvenile centers.

Pahsetopah and her husband Michael have a family dance troupe which performs Native American dancing at various events including faith-based functions. One of their recent travels was to Houston where the couple and their six-year-old daughter Heaven auditioned for NBC’s “America’s Got Talent.”

Pahsetopah said the trio would try again next year to win a chance to compete on national TV. In the meantime, Pahsetopah said she planned on using her prize money toward the purchase of a concession stand.

Both sisters, who learned to cook from watching their grandmother, plan to continue developing their catering venture, knowing others love their foods.

Pahsetopah, who has sold and cooked food at other special or Native American-related events, said she has followers, whom she calls “frybread groupies.”

“Our entries will blow your socks off,” Mashunkashey said. Peaches and strawberries filled a large clear plastic container at her stand while chili heated for the Indian tacos.

Mashunkashey said she’s been making frybread since she was 13, crediting her grandmother the late Lillie Bighorse Cunningham. “She was my mentor, my teacher for everything.”

“She can make it in her sleep,” Miller said of her mother. “I’ve got to practice on it.”

Judging the competition were attendees who paid $5 to sit through a round of traditional tacos or dessert taco entries. Six or more attendees accepted the challenge and sampled tacos during each round of judging.

Armed with plastic cutlery and a pen and paper for note taking, the judges sampled and scrutinized each dish for a few minutes before the plate was taken away for another entry dish.

“It’s a heck of a deal. You can eat all this for $5,” said Ursula Bowling of Oklahoma City, who attended with her family. In one judging round she said she sampled eight entries.

When asked what her evening plans were, Bowling replied: “I don’t think we’ll be eating dinner.”