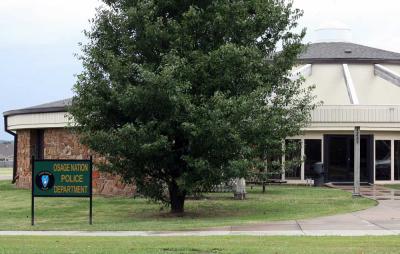 The Osage Nation Police Department is accepting registration information from convicted sex offenders who are required to register their whereabouts with local law enforcement authorities whenever they move, visit or hold a job within the Nation's jurisdiction. The information collected will be used to maintain the tribe's new sex offender registry.

ONPD Officer Brian Herbert is the project manager for the Nation's sex offender registry and will register the offender's information when he or she comes to the Nation's jurisdiction, which includes all lands held in federal trust. Those trust lands include the Nation’s Indian Villages, the government campus and the Osage Million Dollar Elm Casino properties.

"They (registered offenders who are Osage or non-Osage) have to come and see me, just like with parole (officers)," Herbert said. "They must report address changes," schools being attended, jobs being held and have three days to update changes.

In July 2007, the First Osage Nation Congress passed resolution ONCR 07-12, which states the Nation intends to comply with the Adam Walsh Child and Protection Safety Act, prompting efforts to launch the offender registry. In 2009, the Nation was awarded an implementation grant from the U.S. Department of Justice, Sex Offender Management and Registration and Tracking Office (SMART) to start-up the offender registry.

A Web site for the Nation’s offender registry has been established at http://osage.nsopw.govwhere users can sign up for e-mail alerts on the latest information and registered offenders added to the registry. In the meantime the Nation’s Executive Branch and the ON Congress are drafting further legislation relating to sex offender laws and policies that are subject to approval.

A draft version of the “Osage Nation Sex Offender Registration and Notification Act,” which includes offenses and penalties, is available for public view on the ONPD’s Web site atwww.osagetribe.org/law. Herbert said the public is welcome to view the draft laws on sex offenders and offer feedback to ONPD.