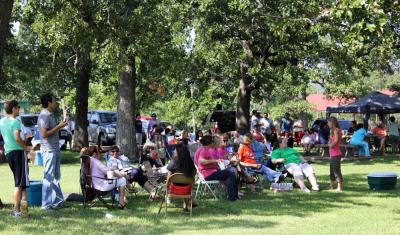 The Osage Nation is still studying the possibility of contracting the Pawhuska Indian Health Service Clinic, according to the Executive Branch. If the Nation chooses to contract, it would assume control over administration and funding for programs and services provided by IHS.

“No decision has been made at this time on whether or not to contract the clinic,” according to a Dec. 1 e-mail from Chris White, the Nation’s executive director of governmental affairs.

The e-mail comes two days after the Nation’s Health and Wellness Advisory Board met and read an e-mail from retired IHS area director John Daugherty who was hired on contract by the Executive Branch to help the Nation in any IHS negotiations. Daugherty was listed on the board’s Nov. 29 meeting agenda but did not attend and sent the e-mail to the board during the Thanksgiving holiday.

“Chief Red Eagle advises me that he will continue to provide direction concerning my duties and travel under the contract I have with the Osage Nation,” the Daugherty e-mail stated. “Additionally, the Chief has asked me to relay that he and his legal counsel are continuing to review the documents I have submitted to his office, and will not be forthcoming in the immediate future.”

Tim Tall Chief, who is the board’s vice chairman, read the letter aloud. He interpreted the letter as stating: “(Daugherty) does not meet with us or report to us at all,” he told fellow board members Paul Stabler and Cecelia Tallchief after reading it. Board Chairman Dr. Ron Shaw was absent that day.

Compacting the Pawhuska IHS originated within the ON Health Board when Chief Red Eagle used to sit on the board when he was Assistant Principal Chief under the Gray administration. In fact, Red Eagle started the health board and noted that during his campaign for chief as one of the highlights of his term as assistant chief.

“Because I report to the Chief, I don’t report to you all, so I’m not going to come and report to you – is basically what it says,” Tall Chief said then added: “but we knew he didn’t report to us, we’ve always known that all along, that’s the way they wrote his contract and that’s fine. All we were doing was hoping to get an update and if they’re not comfortable doing that because it needs to go to the Chief and the Chief should release that information to us, that’s just fine, that’s just business.”

“That means that we don’t have to be held responsible for the stuff that happens or doesn’t happen,” Cecelia Tallchief added.

The Osage News inquired about Daugherty’s work for the Nation following the board’s meeting and White responded in the Dec. 1 e-mail. White said Daugherty’s e-mail originated in the Executive Branch and it was passed onto Daugherty because White did not have the board’s e-mail addresses at the time.

Daugherty (Eastern Shawnee Tribe of Oklahoma) was the IHS area director for the Oklahoma City Area Office with prior IHS experience including: CEO of the Claremore Indian Hospital; facility director of the Miami Indian Health Clinic; and he assisted the Cherokee Nation when it began the process of contracting the W.W. Hastings Indian Hospital in Tahlequah, White said.

“In this instance, (Daugherty) was hired by Chief Red Eagle to assist and provide technical advice on various health matters now before the Nation, or that may come before the Nation,” White said. “His professional services contract states that he shall provide other duties as requested by the Principal Chief or his designee.”

Daugherty’s current contract, with a $50,000 limit, started Sept. 20 and expires Dec. 30, said White who added he expects Chief Red Eagle will extend Daugherty’s contract into 2011. White said there has been no change involving the board in relation to Daugherty’s work efforts.

White said in his e-mail the employees of the Pawhuska IHS clinic will be “properly involved in this process in order to keep them properly informed and to mitigate further rumors and misperceptions… the process of assessment will take course over a period of several months and the clinic employees will be kept properly informed on a regular basis as that process moves forward.”

According to the IHS Web site, the federally funded agency has negotiated a total of 75 Self-Governance Compacts and 96 funding agreements with Indian tribal governments and tribal organizations as of February 2009. Currently, 328 tribes participate in these 75 compacts with the IHS. The tribes involved in Self-Governance represent 58 percent of the 562 federally-recognized Indian Tribes in the United States.