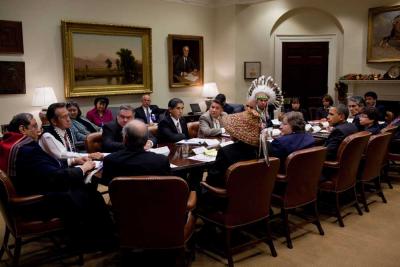 It was 3:19 p.m. Wednesday when an e-mail began circulating the Osage Nation campus that read, “Chief Red Eagle just sent a text that he is in the White House now.”

Tuesday is when Red Eagle’s administration had sent out a bulletin that Red Eagle had been one of 12 tribal leaders chosen who would get to meet with President Barack Obama in the White House the day before the start of the annual Tribal Nations Conference today.

The 12 leaders present, chosen to represent their geographic diversity of the country, were Red Eagle, President Joe Shirley of the Navajo Nation, Chairman Black Eagle of the Crow Tribe, Chairman Smith of the Pala Band of Mission Indians, Chairperson Edwards of the Caddo Nation of Oklahoma, Chairman Barbry of the Tunica-Biloxi Indian Tribe, Chairman Hall of the Three Affiliated Tribes, Chairman Wright of the Pyramid Lake Paiute Tribe, Chairman Hayes of the Ute Mountain Ute Tribe, Chairman Cladoosby of the Swinomish Tribe, President Thomas of the Central Council Tlingit & Haida Indian Tribes of Alaska and Chairwoman Diver of the Fond du Lac Band of Lake Superior Chippewa.

Red Eagle addressed the president, asking him to continue supporting the efforts of trust responsibility and he thanked him for supporting the Indian Health Care Improvement Act. Red Eagle asked Obama to continue to fund the act as advancing medical technologies can be costly to tribal nations.

Red Eagle said that Obama recommitted to a nation-to-nation relationship between the federal government and tribal nations. Tribal leaders in the meeting asked Obama to consider a cabinet level position for Indian Affairs and Red Eagle said Obama was non-committal with his answer but said he would take it under consideration.

The Tribal Nations Conference began around 9 a.m. today and Obama gave opening remarks to the approximately 500 attendees, including more than 320 representatives from federally recognized tribes, administration officials and members of the U.S. Congress.

“I want to hear more from you about how we can strengthen the relationship between our governments,” Obama told tribal leaders. “Whether in education or health care, or in fighting crime or in creating jobs.”

Obama said his administration is committed to providing better roads, more protection, better schools, health care, clean energy and technology to Indian Country. He also noted that with the recent signing of the Cobell settlement he is dedicated to seeing the settlement of long standing trust cases. “I also want to note that I support legislation to make clear – in the wake of a recent Supreme Court decision – that the Secretary of Interior can take land into trust for all federally recognized tribes,” Obama said. “That’s something that I discussed yesterday with tribal leaders.”

Obama ended with these remarks: “And what I hope is that we are seeing a turning point in the relationship between our nations. The truth is, for a long time, Native Americans were implicitly told that they had a choice to make. By virtue of the longstanding failure to tackle wrenching problems in Indian Country, it seemed as though you had to either abandon your heritage or accept a lesser lot in life; that there was no way to be a successful part of America and a proud Native American.

“But we know this is a false choice. To accept it is to believe that we can’t and won’t do better. And I don’t accept that. I know there is not a single person in this room who accepts that either. We know that, ultimately, this is not just a matter of legislation, not just a matter of policy. It’s a matter of whether we’re going to live up to our basic values. It’s a matter of upholding an ideal that has always defined who we are as Americans. E pluribus unum. Out of many, one.”