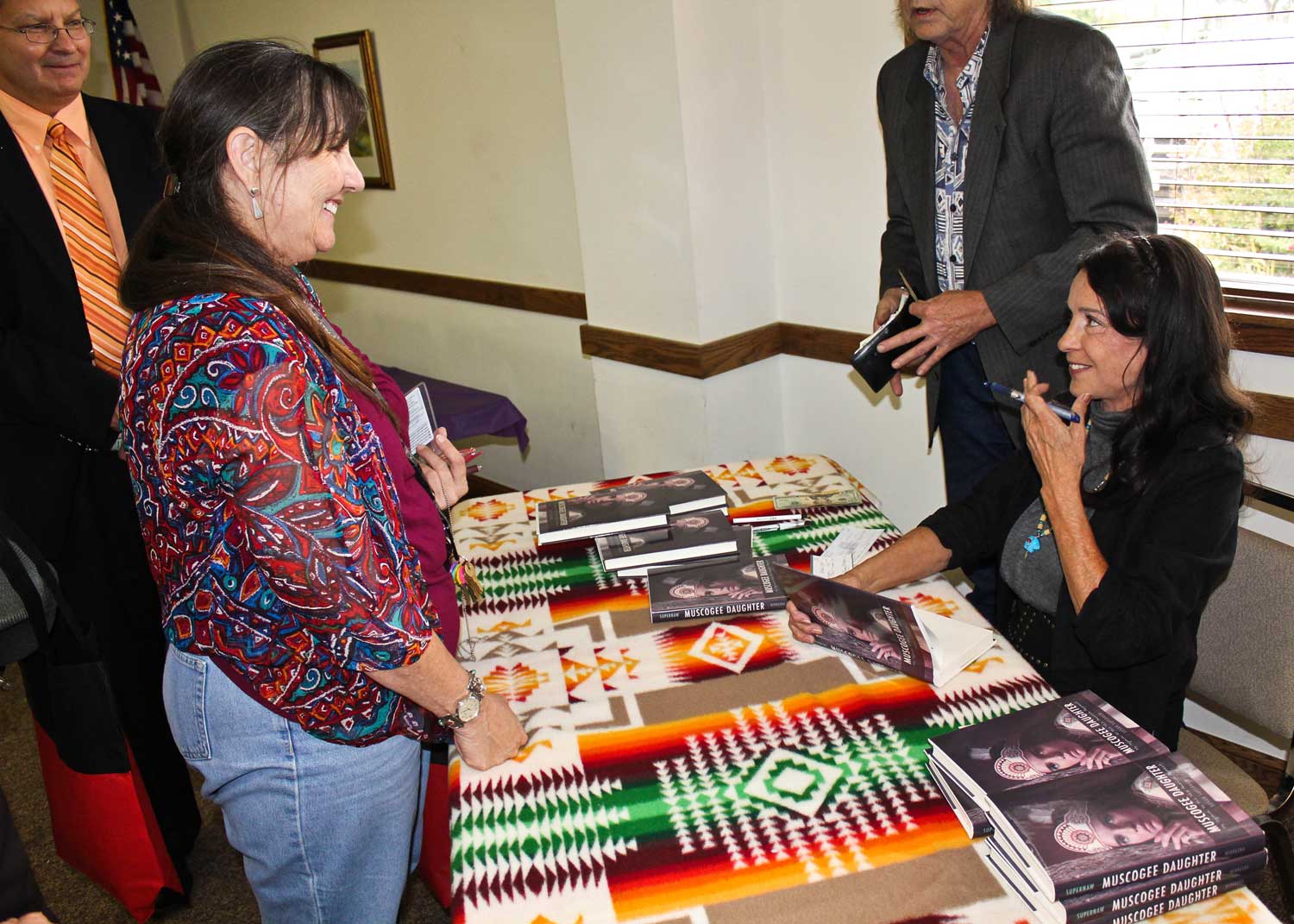 Susan Supernaw addresses abusive past at ON Counseling Center luncheon

To everyone who knew her, Susan Supernaw had it all.

She was young; she had talent, personality and was crowned Miss Oklahoma in 1971.

She was a Native woman going places but when the crown came off she was a woman carrying an unimaginable past.

As a child she was physically abused by her stepfather and later as wife and a mother. But now the 60-year-old Muscogee Creek and Munsee author has breached her violent past and is sharing it with others.

“First, I was ashamed and then as I saw it happening to more and more people…especially young women (who) need to be aware of what’s out there and what’s going to happen or what can happen…” she said. “I know how it really hurt my self-esteem and how people couldn’t imagine that someone that did everything that I have done would feel so bad about themselves.”

Supernaw was crowned Miss Oklahoma in 1971. She was a Merit Scholar student and now an author, amongst other titles.

She made a visit to Osage Country on Oct. 7 for a book signing and presentation as a part of the Osage Nation Counseling Center’s Domestic Violence awareness month events, held at the Dave Landrum Community Center.

At the event she presented a slideshow with pictures of her life growing up in Hominy and later talked about how she escaped domestic abuse and was finally able to move on with her life.

LaVina Clark, Domestic Violence Administrator for the Osage Nation Counseling Center, said the event had a good turnout and captivated the audience.

“Her coming shows that ladies, it can be done, they can get out of the situation,” Clark said. “And now she writes about her experience, she was really interesting when she told some of her stories.”

Supernaw grew up in Hominy but after years of abuse from her stepfather she ran away from home.

A church family took her in after she collapsed on some church steps in Tulsa soon after she ran away from home. She eventually went to college with the National Merit Scholarship, was a cheerleader, a presidential scholar and earned an internship in Washington D.C.

And by coincidence she was entered into the Miss Oklahoma pageant.

She said while many people looked up to her and envied her accomplished life, on the inside she felt her abusive past lingering.

Not only did she leave her family behind when she ran away, but she didn’t have much support from her extended family.

“I came from a very dysfunctional family, so I didn’t really have a lot of family support that a lot of people might have, and simply because everybody scattered from the violence,” Supernaw said. “It takes a while to get out and talk about your past like that, in the old days you didn’t, you just kept quiet about it.”

After her reign as Miss Oklahoma she too had a shot at the Miss America title but fell short. Soon after, she began the American dream. She married and had a son.

But as the relationship progressed she found herself back in the cycle of violence she thought she had previously broken from.

She said it wasn’t until she had her son that she was finally able to stand up for herself and do what she felt was the right thing: leave, for good.

“(It was the) fear of loss of my life and times I feared for my son too, although initially I think it was more about me, but I didn’t fear about him dying as much as I just did not want him to grow up like that, grow up scared like I was,” she said. “For me I was really scared about dying, because I really thought that he would [have] killed me eventually.”

She said for years she lacked self-esteem and courage, but when she thought about her son and how at his age, she dealt with domestic abuse, she decided it was time to make a change.

She said most victims, like her, feel helpless. She said she often thought there was nothing that could be done or nothing she could do to the abuser.

Supernaw said it wasn’t until she realized she couldn’t do it alone that she decided to take action.

“I think that you have to believe in yourself…that to me was the key for me to actually to get to a point where I could say I don’t deserve this,” she said. “I wasn’t put on this earth to be abused and I am valuable as a child of the creator, if nothing else.”

In her book “Muscogee Daughter: My Sojourn to the Miss America Pageant”, Supernaw goes into detail on her escape from her abused family in Hominy, her road to the Miss Oklahoma title and Miss America and her lifetime journey toward self and cultural identity.

Clark said she was impressed with Supernaw’s strength even as a child. She said the author was perfect for the event.

“Everybody…they really thought she was interesting, there was a lot of people at the end that was going to buy her book even when we were cleaning up she was still talking to people,” Clark said. “She was approachable.”

A handful of fans stayed after the event for a more personal visit with Supernaw. Some had books signed for their loved ones and others stuck around to give Supernaw praise for courage.

Supernaw said she’s come a long way from the days where help seemed like something far out of reach. As a child telling anyone about the troubles she faced seemed useless but now that times have changed she sees how talking about her past can help others.

“I think it’s good we get the word out that’s why I was really excited about coming here to help people know the words getting out,” she said. “We can all do something.”