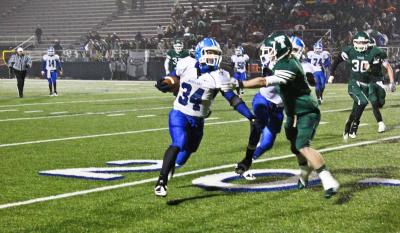 After what seemed like a breezy regular and post season, Woodland is back in the state championship game to defend their Class A title.

Woodland defeated Thomas-Fay-Custer, 32-7, on Dec. 2, in a semi-final matchup in Enid.

The freezing temperature, sleet-turf field and weak Thomas defense wasn’t enough to hold the Cougars back, 13-0, for a chance to defend their title.

“They did well, 32-7 with this team in these conditions is a big win, that’s a big win, if you dried this field off, we were able to do a lot more stuff but I just couldn’t be more proud of what they did,” he said. “It was fun, the kids did a great job, they just did everything we asked of them.”

It was fun for the Cougars but not so much for the Thomas Terriers.

After adjusting to Thomas, Woodland was quick to jump on the scoreboard scoring their first touchdown with 4:29 left in the first quarter and then two more in the second, leading Thomas 20-0 at the half.

Before the game Sindelar said Thomas was known to run a spread offense and run the ball, but their strategy couldn’t hold up against Woodland’s defense.

“You can see every time they ran that zone our kids were just there, they were patient on the line of scrimmage, there was no cutback lane,” Sindelar said. “They (Thomas) couldn’t move the ball at all, all night long, they just did a great job defensively, I’m pretty proud of them, they’re happy.”

Sindelar said he’s confident in all of his players on offense and defense and that showed Friday against Thomas. He said the confidence will carry on into the finals where they meet Wayne on Dec. 10 at 1 p.m. at Oklahoma State’s Boone Pickens Stadium in Stillwater.

“I’m so confident in these guys that I’ll throw the ball in the rain because I’m not worried about them scoring on us defensively . . . so got a little bit more chancy tonight than I normally would under these conditions, but that’s just straight confidence in these guys,” he said. “I think most people in the state thought that it would be a Woodland-Wayne final, so it will be good.”