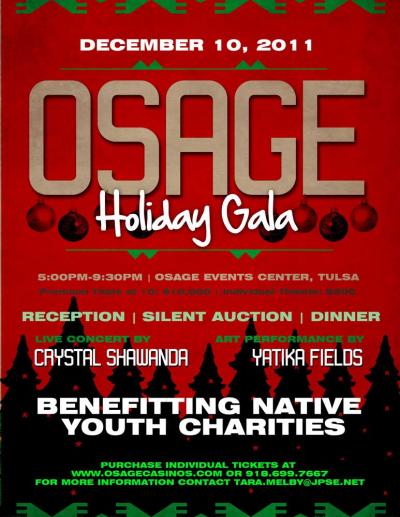 An Osage Holiday Gala hosted by a group of Osage citizens that was supposed to help raise money to benefit Osage Youth and the Osage Tribal Museum was canceled eight days before the event.

“The Planning Committee for the Osage Holiday Gala has cancelled (sic) the event. We will issue a statement about this soon. Individual tickets will be reimbursed,” the notice stated.

Numerous calls and emails were sent to event organizers and others involved in the event that was supposed to be held at the Osage Event Center, but messages were not returned.

Soon after, speculation began as to why the event was canceled. Some said Nike N7 had pulled from the event for unknown reasons and others said the Notah Begay III Foundation was the one who decided to hold off, because of  “controversy” surrounding the event.

Friday afternoon, Moira Red Corn, Osage physician, board member for NB3 Foundation and one of the many “Osage citizens” behind the event put speculation of Nike N7 pulling out to rest when she simply replied “no” when asked if Nike N7 was the one who withdrew from the event.

Red Corn said organizers were working to send out a press release by Friday evening but as of Monday the News hadn’t received one.

The Osage Tribal Museum, The Osage Foundation, the Notah Begay III Foundation and the Nike N7 Fund would have benefited from the funds raised from the gala. Had the event resumed, the money raised for the foundations and fund is said to have essentially benefited the Osage youth.

Tickets were set at $200 a plate and $10,000 for a premium table of 10 that included a VIP Reception at the host hotel. The gala had already raised $100,000, with large donations coming from the Osage Nation Chief’s Office and the two law firms that represented the Nation in the Osage Trust Case – Akin Gump Strauss Hauer & Feld LLP and Pipestem Law Firm. All three donated $30,000 each. The Osage Minerals Council also recently donated $10,000 to the gala as well.

Since its debut the gala has raised concerns by politicians, shareholders and community members to the point that some Osages felt the gala was inappropriate, while others felt it would be a good thing for the Osage youth in the community.

Charles Red Corn, Osage author and Osage News blogger, posted on the “Osage for Fiscal Responsibility” Facebook page a letter his daughter Moira Red Corn sent to him in regards to the cancellation. In it she said she was saddened to see a positive event end on such a negative note.

“In hind-sight, our vision of what the Osage Holiday Gala could accomplish was too large. I am sad that we could not pull it off and make the projected $100,000 profit that we had hoped (above what the chief and minerals council contributed). In attempting to raise funds from outside sources, it became an insurmountable task with the toxic spirit coming from elected officials, political hopefuls and hearsay written in the form of news. But I walk away with hope. We have brought this important issue to the table, and I hope our community keeps in mind that we cannot accomplish anything if we continue to hurt each other and undermine efforts of volunteers,” she wrote.

Ryan Red Corn followed with a lengthy post of his own on the same Facebook page stating that he was disappointed in the “behavior of some of our Osage people” and called it “salty behavior” that surrounded the gala.

“At this point, I must say, I am severely disappointed in the behavior of some our Osage people. By this time, many of you have heard that the Osage Gala has been cancelled (sic). Due to a variety of reasons, but undoubtedly mostly due to the tenacious amounts of energy produced by this forum to make the event essentially politically toxic for all those involved. So for that, this forum deserves a pat on the back. Congratulations,” Ryan Red Corn wrote.

Ryan Red Corn went on to say that if the gala were to have happened the Osage Nation would have only had to pay for “PART of a field on unused land that the tribe rightfully owns ONE block from Pawhuska’s partially economically depressed commercial epicenter….” As opposed to the “100% of the costs associated with the construction…” that would be the tribe’s burden without outside funds.

Jim Ryan, a congressional hopeful who recently announced his candidacy for the Third Osage Nation Congress, was quick to shoot back by stating that the event wasn’t canceled because of “toxic” comments or “salty behavior” but instead due to poor planning and high-ticket prices.

“There is only one reason events like this are cancelled (sic), low ticket sales. The late notice and $200.00 ticket price excluded 95% of the Osage Nation. When they cancelled there were only 48 confirmed attendees on their site. Cancelling was the right thing to do in order to make the best use of the $100,000 dollars that had already been donated,” Ryan wrote. “While you are attempting to blame the failure of this event on “toxic” comments made on this site. The fact is that it failed because of the short notice and the high ticket price. As I have said, don’t give up on this event with proper planning and a reasonable ticket price this could be a money maker for all the groups involved.”

Wilson Pipestem, Osage lawyer on the Osage Trust Case, Notah Begay III Foundation Chair and a member of the Nike N7 board, who is also behind the event, remained quiet up until the cancellation. He stood up for the event and responded to Jim Ryan’s comment about poor planning and high-ticket prices.

“Mr. Ryan, You could not be more wrong. This event failed because of the attacks leveled by you and others who were suspicious of the motives of those who were trying to create something positive for the Osage community. In one case, one of the largest Osage vendors decided not to support the event because of the "controversy" surrounding the event that you and others worked to create,” Pipestem wrote.

Readers of Ryan Red Corn’s post continued to flood in with their comments on what he, Ryan and Pipestem posted on late Monday.

The gala initially started off as an event that could help the Osage Youth and eventually blossomed into an event where three organizations would benefit and in return lend their services in respect to their organization’s object to benefit the Osage youth.

In the initial press release, Moira Red Corn said the event was put together by “Osage citizens” who were interested in raising money for a soccer field to be built in Pawhuska. She said the group of Osages simply wanted to help the Osage youth.

“I know as a doctor I’m in a position to give back to my tribe, and I hope my efforts with this group of Osage citizens I am able to affect the lives of young Osages in a positive way,” Red Corn said.

The schedule of events during the gala included a reception and silent auction that was to begin at 5 p.m., where Osage artist Yatika Fields was to produce a live art painting. A mixture of art, jewelry, packages and sports memorabilia were to be featured in the silent auction.

A dinner and live auction were to begin at 6:30 p.m. and the evening was to wrap up with a live concert from Ojibwe country singer Crystal Shawanda, who is also a board member for the Nike N7 fund.

One-third of the proceeds was said to go to the Osage Foundation, a not-for-profit corporation created by the Osage Nation, to build a brand new soccer field in Pawhuska.

One-third of the proceeds was to go to The Notah Begay III Foundation, a 501c3 corporation started by PGA Golfer Notah Begay III (Navajo/Pueblo) that strives to reduce childhood obesity and diabetes through soccer and golf programs for Native American youth. The money was going to be used to conduct sports camps through the NB3 Foundation for the Osage youth.

Lastly, proceeds would have gone toward the Nike N7 Fund, a fund inspiring a movement toward healthier tribal communities through the Nike N7 Summit and by awarding grants to health and wellness programs in tribal communities with profit gained from the selling of Nike N7 products. Sam McCraken (Assiniboine/Sioux), the visionary and chairman on the N7 Fund board was to attend the gala and participate in the honoring of the Osage community activist, according to the release.

In the release, Begay said he was excited to bring the services of his foundation to the Osage youth.

“I’m looking forward to visiting the Osage Reservation for this event and bringing out sports programs to young Osages,” Begay said.

The Museum also planned to host its annual Christmas tree auction at the gala, with three decorated trees donated by Osage artists were to be auctioned off.  Due to the cancellation the Museum has decided to instead take sealed bids during the annual Christmas Home Tour in Skiatook on Dec. 11, from 2-4 p.m. Admission is free but those who wish to attend must each have a ticket that can be obtained at the Museum.

The inaugural gala committee was also going to honor a local community activist who contributes to the wellbeing of Osage youth through sport.

Since word of the cancellation has spread the gala planning committee, Nike N7, the Notah Begay III Foundation and the Osage Foundation have not officially commented on the gala and what will happen next.

For now, the Osage youth remain without a soccer field and the speculation continues.